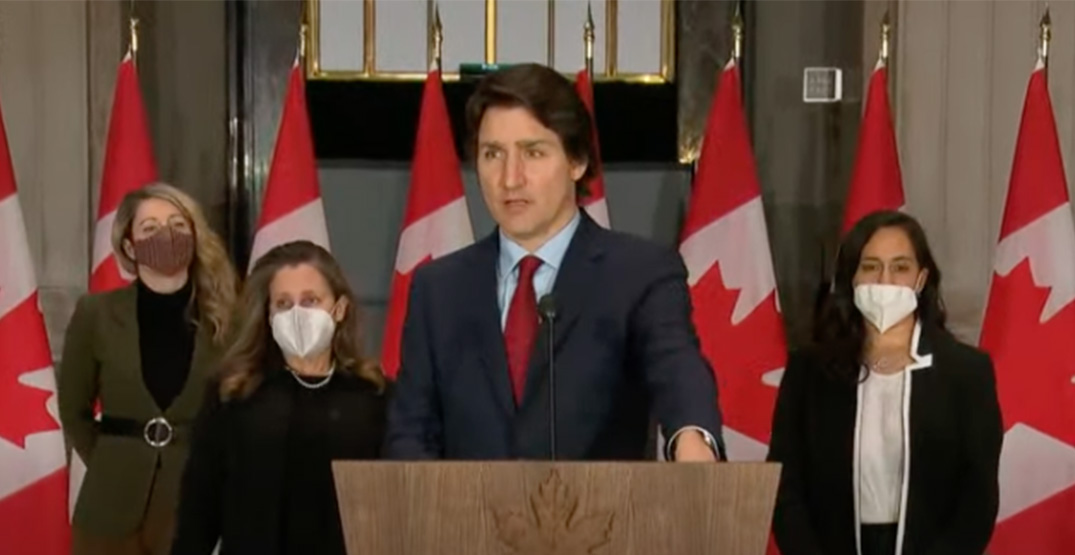 Canada has imposed further sanctions on Russia, this time targeting the elite and major financial institutions.

Prime Minister Justin Trudeau announced today that sanctions will be imposed on 58 people and entities including members of the Russian elite and their family members.

The Wagner Group, a Russian paramilitary organization, and major Russian banks are also being targeted by these sanctions.

“These sanctions are wide-reaching. They will impose severe costs on complicit Russian elites and they will limit President [Vladimir] Putin’s ability to continue funding this unjustified invasion,” said Trudeau during a press conference on Thursday.

Russia’s attacks on Ukraine are unwarranted, unprovoked, and unacceptable – and they will be met with severe consequences. For more on Canada’s response, tune in to my update with @CAFreeland, @AnitaAnandMP, and @MelanieJoly: https://t.co/m9s9tX7ltQ

The prime minister added that politicians like members of the Russian Security Council including the defence minister, finance minister, and justice minister will also be sanctioned.

In addition, the federal government is also blocking exports to Russia that require permits. According to Joly, existing permits will be cancelled and all applications will be denied.

“No aerospace technology and mineral goods will be sent to Russia,” she said.

The prime minister spoke with Ukraine President Volodymyr Zelensky over the phone on Thursday, who called on Canada to impose tougher sanctions against Russia.

“Now, more than ever, we need concrete support!” tweeted Zelenksy after the phone call. “I count on leadership of [Canada] in this process!”

Phone conversation with @JustinTrudeau 🇨🇦 Today there is a full-scale war throughout 🇺🇦! We demand the immediate imposition of additional tough sanctions against Russia. Now, more than ever, we need concrete support! I count on leadership of 🇨🇦 in this process!

Canada imposed its first round of economic sanctions on Russia earlier this week.

Trudeau says he has also spoken with G7 partners and is working closely with NATO allies for a coordinated response.

Joly says today’s announcement is just the “first important package,” and that there are more sanctions coming.

This comes after Russia launched a full-scale attack on Ukraine Thursday morning after years of tension.