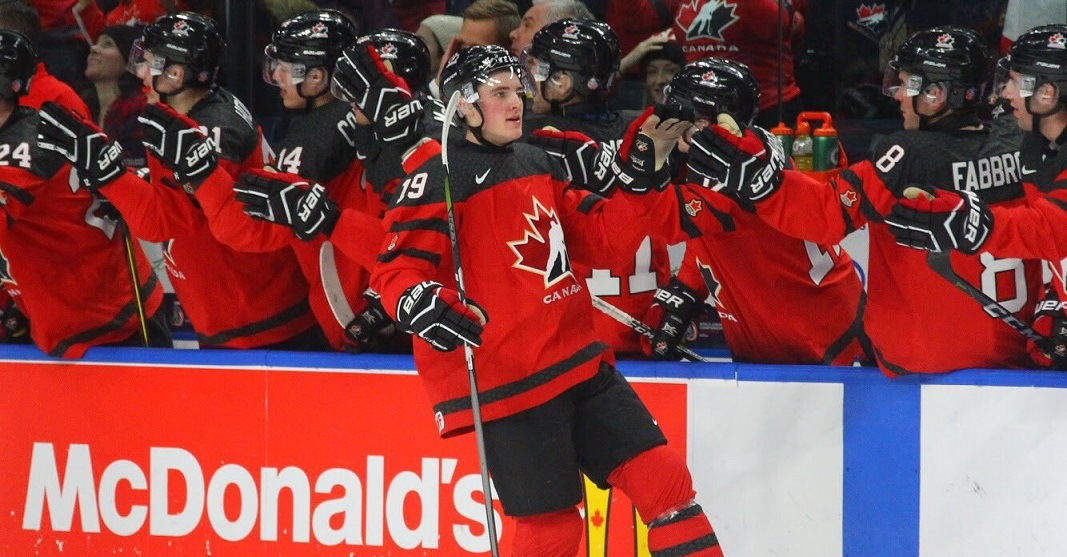 The story prior to Canada’s semi-final match against the Czech Republic was that they hadn’t faced enough tough competition in the tournament to this point.

Well, that question will linger into the gold medal game against Sweden on Friday.

Like it or not, we got to hear Canada’s goal song a lot…

After an early scare, Canada disposed of the Czechs rather easily, winning 7-2 to advance to the final of the World Juniors for the third time in four years.

You could say Canada was flat-footed to start the game, but give the Czechs credit.

They pushed the pace, and in the first 10 minutes it looked like they were going to give Canada a run for their money. Especially after a great move by Filip Zadina gave the Czechs an early lead.

Canada continued to struggle for a few minutes until they got their first power play.

Canada’s power play has been dominant all tournament long, and it continued again on Thursday.

First it was Sam Steel finishing off a power play that featured great puck movement by the top unit.

.@AnaheimDucks prospect & @WHLPats forward Sam Steel gets 🇨🇦 on the board to tie it at 1⃣-1⃣!

A few minutes later on a different man advantage, Cale Makar’s point shot was tipped in by Drake Batherson to give Canada the lead.

.@Senators prospect Drake Batherson redirects one in on the power play to make it 2⃣-1⃣ 🇨🇦@HC_WJC 🇨🇦!

Makar and Batherson connected again on the power play in a similar fashion to give Canada a 3-1 lead.

Batherson with yet another tip in front to make it 3-1 Canada pic.twitter.com/5xKNF0auMI

Canada never looked back from there.

Each of the last three teams to win gold at the World Juniors had the top power play in the tournament, and Canada will be hoping to extend that streak to four.

Batherson, an Ottawa Senators prospect, didn’t even need a third period to get his third goal of the game. Late in the second he drove to the net and beat Josef Korenar to complete the hat-trick.

Incredibly, Batherson now has seven goals but no assists in six games. He clearly has a knack for scoring, as evidenced by his three goals on just three shots and limited ice time against the Czechs.

Drake Batherson with his hat trick in under 7 minutes of ice time through 2 periods.

Maxime Comtois, Jordan Kyrou, and Boris Katchouk had the other goals for Canada, while Zadina added a late marker for the Czech Republic.

After the game, Canada’s best three players of the tournament were named, with Batherson, Makar, and Conor Timmins getting the honours.

As voted by Canada’s coaching staff, the best three players for 🇨🇦 at #WorldJuniors are Drake Batherson, Cale Makar and Conor Timmins. pic.twitter.com/Lx4R9mYP1P

Canada has no time to reminisce on this win – their focus now shifts to Friday’s gold medal game against Sweden, a team that hasn’t trailed yet in this tournament.