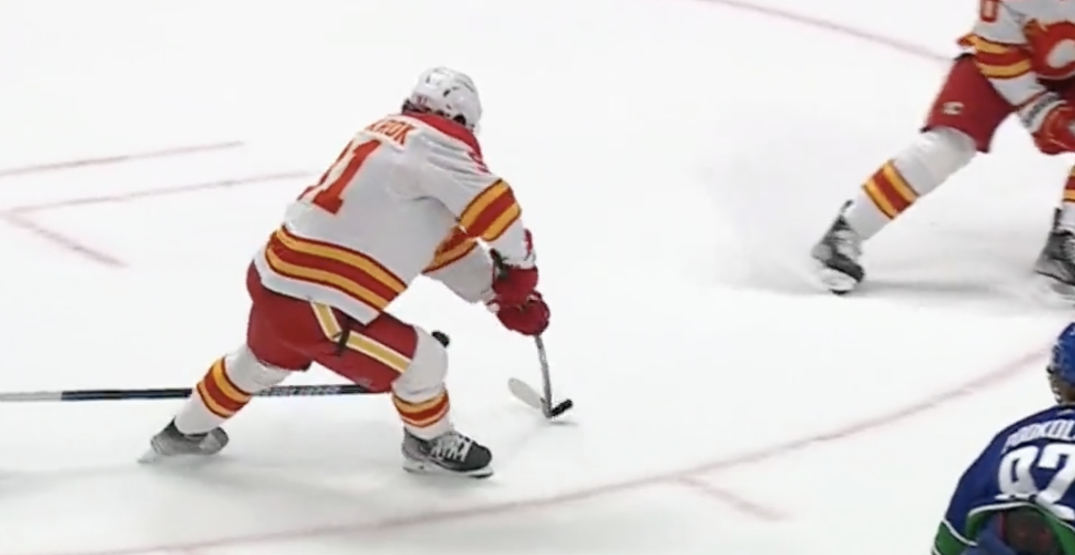 Calgary Flames general manager Brad Treliving boasted about Calle Jarnkrok and his ability to play any number of positions in acquiring the forward a week ago.

He must’ve left out the part that Jarnkrok can play with a bit of an ambidextrous flair as well.

Jarnkrok, a right-shot forward who can play left wing, right wing, and centre, fired a puck at Vancouver Canucks goalie Thatcher Demko in a lopsided 5-2 victory on Saturday.

“I saw that video on Instagram,” Calgary forward Dillon Dube said Tuesday. “I didn’t know if it was real or photoshopped or whatever. That’s probably harder than my shot. I was so surprised. I actually meant to ask him about it today. I didn’t have a clue. I saw it yesterday. I wanted to ask him.

“Incredible that the curve was the other way too. If he picked up a left-handed stick I could see it. I have a hard enough time shooting with my normal stick. It was impressive.”

We knew Jarnkok could play all three forward positions…I didn't hear any talk of him shooting both left and right… #Flames pic.twitter.com/ob3yfmiEj7

Fair to say it caught some attention.

“That’s quite a skill,” Flames associate coach Kirk Muller said. “I can’t do it. A lot of guys can’t. Faceoffs, and he took a shot the other night on his…I wanted to say backhand but his other hand. Not many people can do that. It’s actually quite a skill.

“I had trouble shooting one way. It’s a pretty good skill he has. Not many guys can do it.”

The shot isn’t the only attention-grabbing quirk in Jarnkrok’s repertoire.

He also flips the script when it comes to taking draws.

Jarnkrok will flip his stick around and draw on his backhand like a left-shot when taking faceoffs on his non-dominant side.

@fan960lou @CassieCampbell did you notice Calle Turn his stick for the face off at 16:36 in 3rd period. Took the draw as a left hander @NHLFlames pic.twitter.com/ViFHgbya8U

“The shot…I don’t know what happened there, to be honest with you. But on faceoffs, that’s something I’ve been doing for a couple years.”

Again, it had Dube baffled.

“I honestly don’t even want to try it,” he said of Jarnkrok. “We have had some practices where you switch hands with guys and go through it. I like to think I’m a skilled guy with that. I golf right, so I think I’ve got some hands right-handed. But I can’t shoot the puck. That’s for sure.”