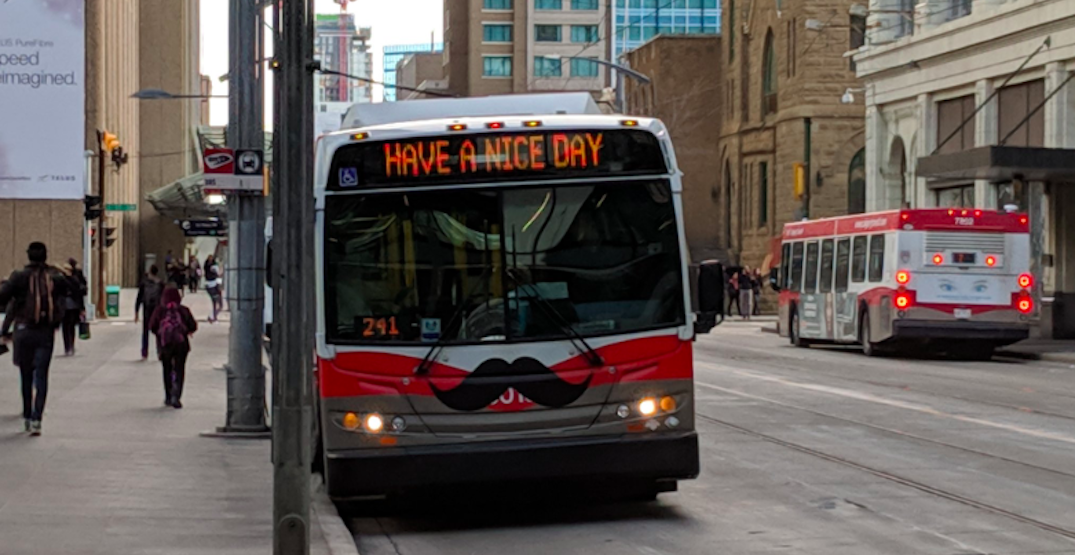 You may have noticed something black, fuzzy, and slightly curled on the front of Calgary buses and CTrains this month, but we promise that there is no need to be alarmed.

Calgary Transit has simply placed some mustaches on the front of a few of their transit vehicles this month as part of Movember — a month-long initiative raising money and bringing awareness to men’s health.

The new facial hair is actually a part of a contest that Calgary Transit is holding this month, with the prize of a free one-month transit pass up for grabs.

#CTRiders, We’re running a contest for customers this Movember – snap a photo of a bus or CTrain with a ‘stache’ (only when it’s safe to do so) and share it on Twitter or Instagram using the hashtag #CTMovember2018. The contest will run until November 30. https://t.co/FsTDrvfza6 pic.twitter.com/Sy8ehQctot

To enter, Calgarians will need to spot one of these gentlemanly vehicles, snap a photo, and then post it to either Twitter or Instagram (or both!) with the hashtag #CTMovember2018.

Two winners will be picked at random from the pool of entries, and they will receive free January transit passes which will allow them to ride the freshly-shaven vehicles to their heart’s content.

Many Calgarians have already taken up the challenge, with #CTMovember2018 posts being found all over social media.

Here are a few of our favourites below:

So glad I snapped this one. My husband and I were just saying how legitimate the old trains look with their ‘staches. Like they’ve had them since the 1970s. The new trains look more like modern-day hipsters. @calgarytransit #CTMovember2018 pic.twitter.com/5pJm32FwHT

Moustache bus!! Saw this guy on my new “walk to the grocery store at lunch so I don’t have to go later” mission. @calgarytransit #CTMovember2018 pic.twitter.com/NBG3I7M5RU