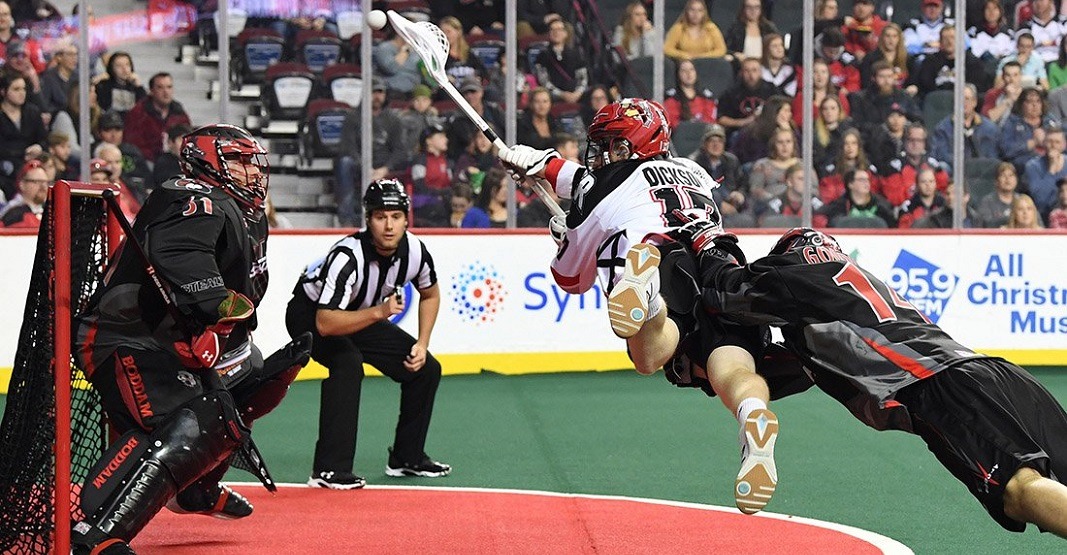 The Calgary Roughnecks have nearly wrapped up their 2018 regular season, and they’ve secured a spot in the NLL playoffs.

With 175 goals scored this season, the Roughnecks have had their fair share of fantastic lacrosse moments throughout the year that led to highlight-reel goals.

Without further delay, here are five jaw-dropping moves that led to Roughnecks goals this season.

Kicking off the list is a pair of goals with a lot in common. Each clip features one of the Roughnecks top offensive threats showing off their skill with a behind-the-back pass to set up a goal.

Then Dane Dobbie replicates the move:

2. Goalie doing it all

Roughnecks goalie Christian Del Bianco has a knack for turning defence into offence with one quick pass.

From the crease, he’s picked up 10 assists in 14 games this season, mostly from plays like this:

But the nicest of these plays has to be this next one, where Del Bianco’s pass leads to a brilliant finish from defenceman Mitch Wilde.

Nobody has scored more goals than Dickson has since joining the NLL in the 2011 season.

He has hit 30 goals every season of his career, and his 61 goals in 2016 is tied for the third most in a season all-time.

When you see plays like this one, you see how he scores as much as he does.

Challenged by two defenders, Dickson uses both strength and agility to get around them and tuck it past the goaltender.

No Roughneck has ever had more than Dobbie’s 732 points in 11 seasons in Calgary.

The 31-year-old veteran has scored his fair share of clutch goals over the last decade, and he kept that trend going with a critical diving goal this season against the Saskatchewan Rush that tied the game and forced overtime.

Again, there’s a reason Dickson has more goals than anyone else since he entered the league.

There are no words for this goal.