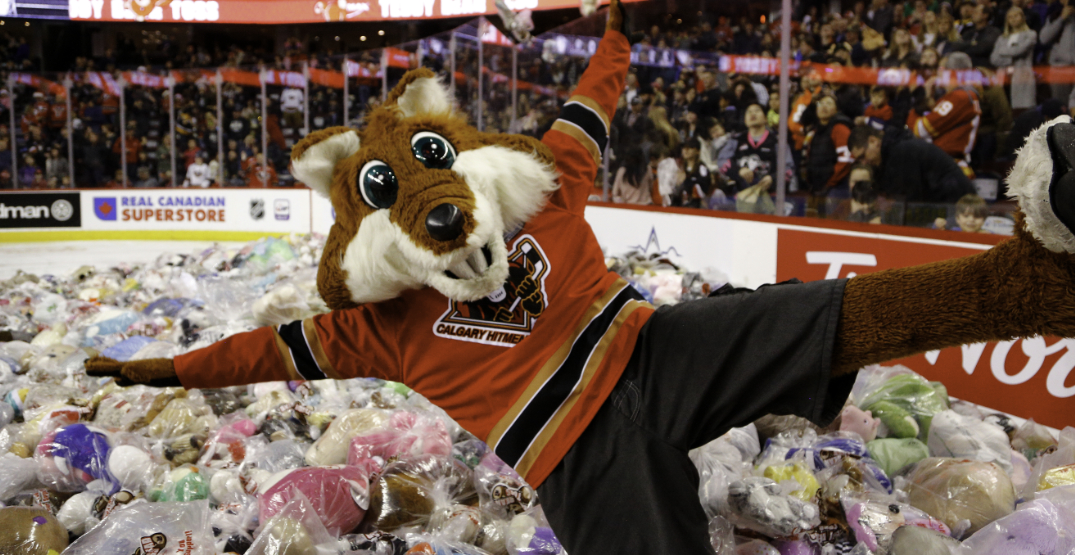 The teddy bears are marching towards the Saddledome. And in one week, too.

The Calgary Hitmen Teddy Bear Toss, an annual tradition that has served over 70 local charities in its time spanning 27 years, is returning Saturday.

“As we approach the Teddy Bear Toss, we have realized there is an urgent need for bears from agencies in and around Calgary.” Rob Kerr, business manager for the Hitmen, said in a release.

“As an organization we make it our goal every year to meet the request for bears, which is currently at 20,000. We are calling on the community and hockey fans to come together to help us in our mission.”

The bears will be donated to over 50 local agencies this holiday season, including the Alberta Children’s Hospital, the Calgary Food Bank, and the Siksika Nation.

Fans are asked to bring a new or gently used small or medium-sized stuffed toy to toss onto the ice when the Hitmen score their first goal against the Lethbridge Hurricanes.

It’s been 734 days since the last Teddy Bear Toss.

Last year, due to COVID complications and the delayed start of the Western Hockey League season, the Hitmen held a three-day Teddy Bear Lane. Fans were invited to cruise along the Christmas-decorated and lighted Fifth Street SE traffic loop entrance to the Saddledome and hand off bears to one of Santa’s elves to toss into an inflatable outdoor rink.

What an outstanding job by the @WHLHitmen on Teddy Bear Lane, under such unique circumstances in a trying 2020.

And well done to #YYC for responding so positively! Cars of teddy bears lined up to help those less fortunate this holiday season!

The Hitmen held the world record after 28,815 teddies flew over the glass courtesy of a goal by Jordy Stallard in 2015. The Hershey Bears of the American Hockey League hold the current world record at 45,650 in 2019.

Tickets are still available for the 2022 Teddy Bear Toss.