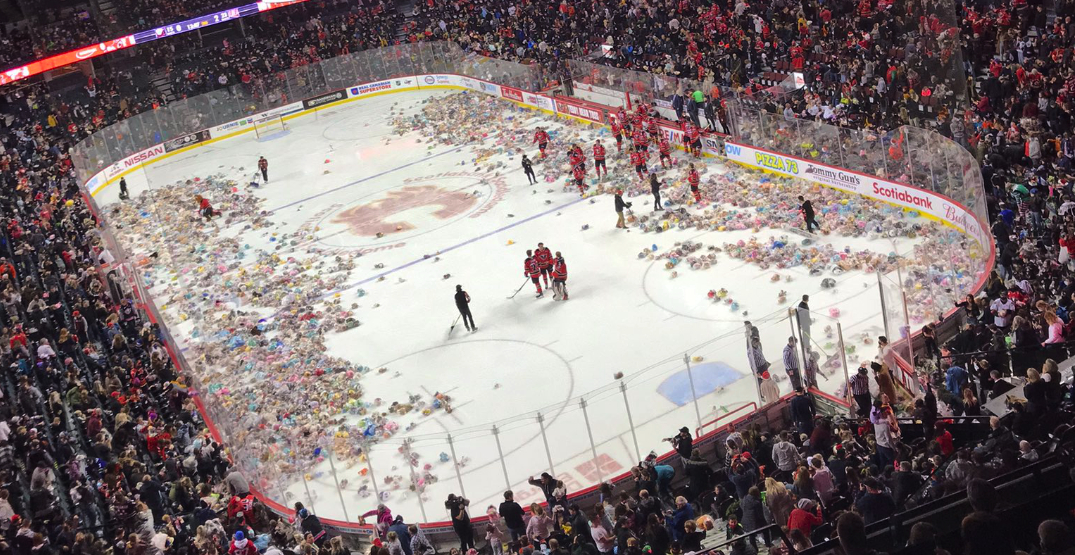 Calgary Hitmen fans caused a lengthy delay at the Saddledome on Saturday afternoon.

For the best of reasons. Teddy Bear Toss reasons.

Fans hurled thousands of teddy bears to the ice at the Saddledome after Cael Zimmerman scored at 6:53 of the second period, triggering the launch in what has become one of Calgary’s best annual hockey traditions.

“It’s something special,” Zimmerman told HitmenTV moments after scoring the goal. “It’s something you’ll remember forever. Knowing where these are going it’s amazing.”

The thousands of bears, and various other stuffed animals, will eventually benefit over 50 local charities this holiday season, including the Alberta Children’s Hospital, the Calgary Food Bank, and the Siksika Nation.

What a sight!! Annual Teddy Bear Toss at the Hitmen game. Great cause and a great way to spend my boys 12th birthday!! #teddybeartoss #calgaryhitmen pic.twitter.com/k9mIpEKc90

False start number one at the Hitmen Teddy Bear Toss.
Off the post. So close. #Dontletthefurflyyet pic.twitter.com/bIG7v8UST7

The Teddy Bear Toss was not held in 2020 due to COVID complications and the delayed start of the Western Hockey League season.

Instead, the Hitmen held a three-day Teddy Bear Lane in which fans were invited to cruise along the Christmas-decorated and lighted Fifth Street SE traffic loop entrance to the Saddledome to hand off bears to one of Santa’s elves to toss into an inflatable outdoor rink. It netted 18,063 stuffed toys for local charities.

The Hershey Bears of the American Hockey League hold the current world record at 45,650, established in 2019.