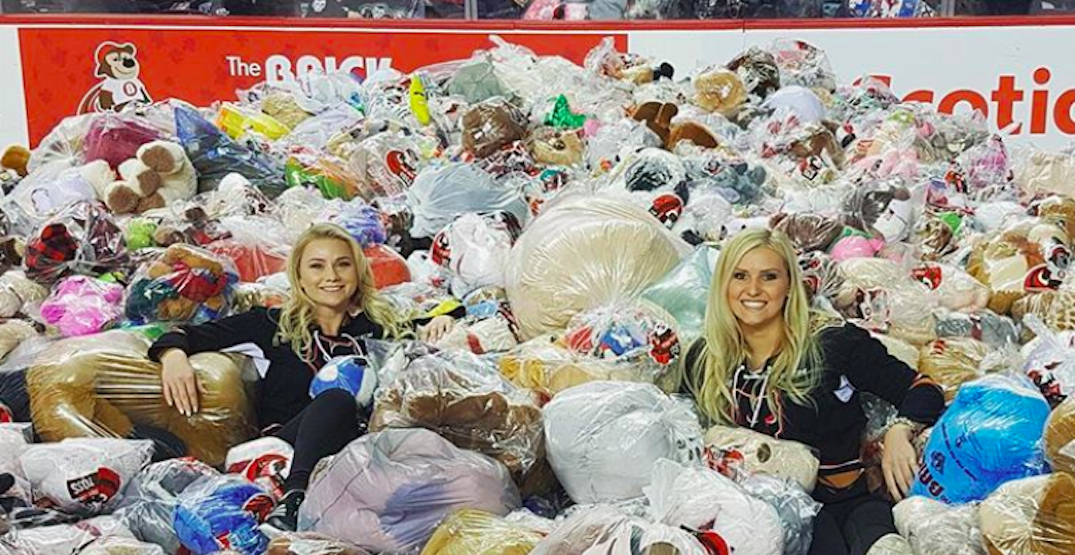 Calgarians can usually expect a good amount of snow out here in Alberta, but one night a year that precipitation is replaced by stuffed animals raining down from the sky.

The Calgary Hitmen’s annual Teddy Bear Toss is coming up on December 9, and the team has already had to make some changes to accommodate for the popular event.

An overwhelming demand for tickets has caused the Hitmen to open up press-level seating for the game against the Kamloops Blazers, which means that starting November 2 hockey fans will be able to purchase some of the Scotiabank Saddledome’s highest possible seats.

Sitting pretty in the corner of the saddle, any bears thrown onto the ice from the press-level seats (after the first Hitmen score their first goal, as is tradition) will have a long way to go before making it to the team’s home ice.

Tickets for these seats will start at $15 for adults and $10 for students and kids, and can be purchased as of 10 am on Friday, November 2 from Ticketmaster and the Scotiabank Saddledome box office.

There are also a limited number of second-level seats available as well.

Last year, 18,035 fans brought 24,605 bears to the 2017 Teddy Bear Toss game, though this year’s organizers are hoping for an even bigger turnout, as 25,000 bears are needed to be shared with children by more than 65 local agencies.

Attendees of the December 9 game are encouraged to bring a new small to medium sized stuffed animal or toy to the game to throw onto the ice the first time the Calgary Hitmen goal horn sounds.

Here is exactly what thousands of teddy bears being thrown onto the ice at the Dome looks like:

Tickets: Press level tickets available online at 10 am on November 2, starting at $15 for adults and $10 for students and children