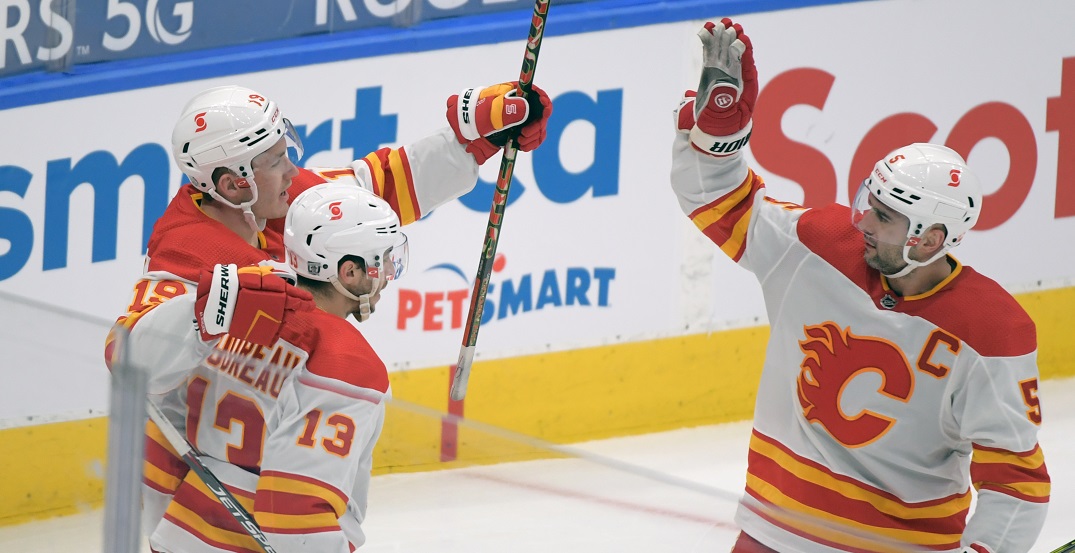 Former Flames captain Mark Giordano’s departure to the Seattle Kraken in this year’s expansion draft has left Calgary fans with one important question: who’s up next?

Giordano had been the Flames captain since 2013-14, following the departure of Jarome Iginla. Iginla himself had been the captain since 2003-04. In many ways, wearing the “little C” next to the big Flames’ logo is a responsibility that comes with an incredible history and pedigree behind it.

It’s still yet to be announced what direction the team will be going. On the one hand, they could choose to remain without a captain until a suitable candidate emerges.

Coming off a disappointing fifth-place finish in the all-Canadian North Division, Calgary might choose to wait a season or so before picking a new leader.

A few seasons ago, names like Johnny Gaudreau or Sean Monahan might have seemed like a natural fit to take over once Giordano left Calgary. But with constant trade rumours around the two players, that pair of options seems unlikely.

But if they do decide to pick their next captain before things kick-off for the upcoming season in October, here are three candidates that could take over for Giordano:

Matthew Tkachuk as an NHL captain might not be a move the 31 other teams like, but it could be the best chance for Calgary to reaffirm their commitment to making the scrappy winger the face of the franchise.

Amid rumours, this offseason that Tkachuk “wants out of Calgary,” giving him the largest level of responsibility could entice the team’s leading scorer from 2019-20 to stick around the Flames long-term.

Picking Mikael Backlund as the Flames captain could be considered a “safe” move, as he’s both well-liked by the fanbase and has already spent 13 seasons with the organization.

With three years remaining on his current contract, giving Backlund the captaincy for the next few seasons would allow time for a long-term candidate to emerge while rewarding the veteran forward for his service to the franchise.

If the Flames are looking for a guy who could fit the Giordano mould of a long-term defensive stalwart to take over the captaincy, Noah Hanifin might just be that guy. In his three seasons in Calgary, Hanifin has fit in nicely to the team’s top-four, averaging over 20 minutes a night of ice time.

In just two offseason, both members of the Giordano-T.J. Brodie top pairing have departed. But with Hanifin now Calgary’s highest-paid defenceman, the former fifth-overall pick from 2015 could take the next step in his career by being given the “C.”