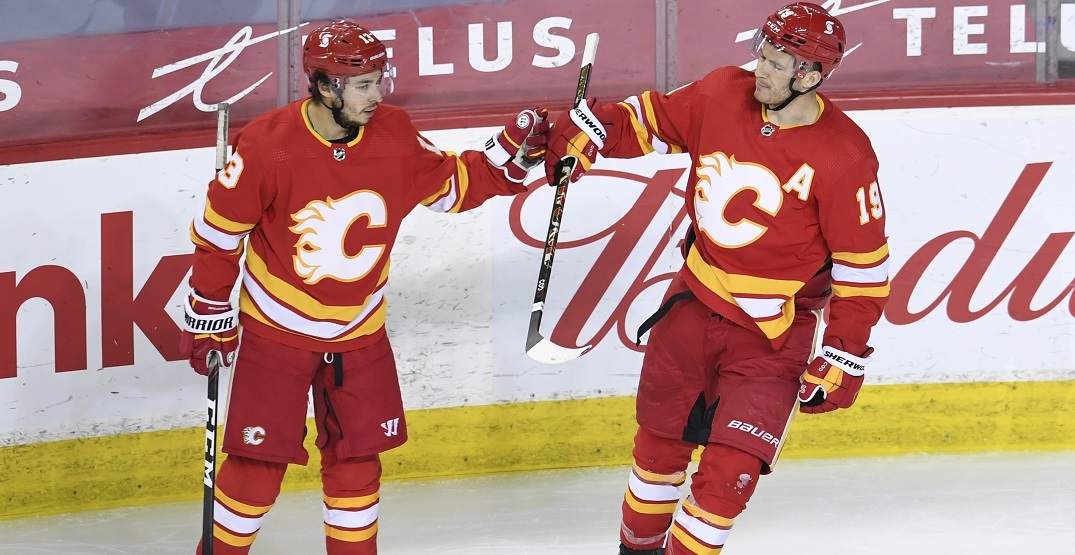 The Calgary Flames lines this upcoming season will look a little different, most notably with the departure of captain Mark Giordano to the Seattle Kraken via the expansion draft.

The Flames stumbled through a disappointing 26-27-3 season last year, finishing fifth in the all-Canadian North Division and missing the playoffs by four points.

But things are back to some semblance of normal this year, with an 82-game season set to get underway in less than two months.

With the Flames set to kick off their schedule on October 16 against the cross-province rival Edmonton Oilers, here’s how they could look come opening night:

Amidst all the trade rumours that the Flames would be losing one of Johnny Gaudreau, Matthew Tkachuk or Sean Monahan this offseason, all three veteran forwards currently remain with the organization.

The biggest offseason acquisition comes by the way of forward Blake Coleman, who signed with the Flames on a six-year deal this past offseason.

Long gone are the days of Mark Giordano and T.J. Brodie patrolling the Flames’ blueline, with the top-pairing defenders parting in consecutive years.

The Flames could run into some challenges with a lack of experience on defence, with Juuso Valimaki having played 73 games and new signing Andy Welinski having played just 46 games over his NHL career.

There’s really not too much to unpack with the Flames’ current goaltending situation. Jacob Markstrom put up just a .904 save percentage in his first year in Calgary, signing on a six-year deal after parts of seven seasons with the Vancouver Canucks.

But the net is still Markstrom’s to lose, with 24-year-old backup Daniel Vladar being acquired this summer for a third-round draft pick from the Boston Bruins.

It’ll be a bit of a baptism by fire for Vladar this season.  Since being drafted in 2015, he has played just five NHL games but is projected to take on a much larger role in Calgary.