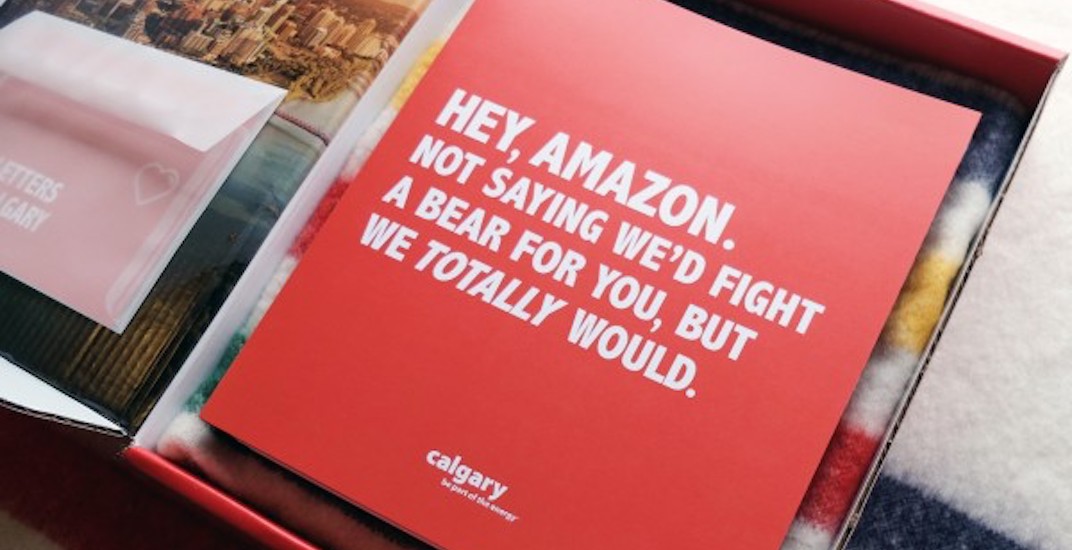 Looks like Amazon doesn’t have to worry about bear attacks anymore.

Calgary officially delivered its pitch to become Amazon’s second headquarters today, as the Goliath tech company has been seeking to create another home base outside its original Seattle location.

While the details are confidential, according to a release from the Calgary Economic Development, it is clear that the pitch team has offered up Calgary’s bear-fighting abilities if Amazon is ever in need.

“Hey Amazon. Not saying we’d fight a bear for you, but we totally would,” the ad reads.

Since Amazon announced that it would be running the HQ2 competition, a team from Calgary Economic Development has been hard at work to put together a winning pitch.

“It’s been a marathon endeavour to put together a submission that reflects the unique value proposition Calgary offers Amazon,” wrote President and CEO of Calgary Economic Development Mary Moran, on their website.

“As one member of our team observed as we were putting the final touches on the 200-plus page submission, it has been six weeks of ‘long nights, frustrations, compromises and successes at breakneck speed.'”

That 200-plus page submission was hand delivered to Seattle on Thursday, though that wasn’t the only way Calgary has been working to become the new HQ.

They’ve also put up a huge ad near Seattle’s HQ, along with a stencil campaign that left little notes from “Calgary ;)” all over the headquarters.

Calgary stepping up the campaign for #AmazonHQ2 (outside an Amazon building in Seattle) pic.twitter.com/rIXAtUMa7m

Calgary Economic Development released a quirky video on Thursday laying out the pitch, and possibly taking a shot at fellow front-runner (and infamously mountainy) Colorado.

“Okay, sometimes it gets a bit chilly, but we’ve got loads of sunshine, and it’s a good excuse for cuddling, not to mention other mountains are so jealous of our mountains,” the video says.

And, as the cherry on top, a chant was started at last Friday’s Calgary Flames game that saw close to 19,000 people yelling “Come on, Amazon!” in unison during the game.

According to Amazon’s Request For Proposal document, the final site selection and announcement will come sometime in 2018 – so there’s at least three months of waiting before Calgary finds out if it’s campaign paid off.