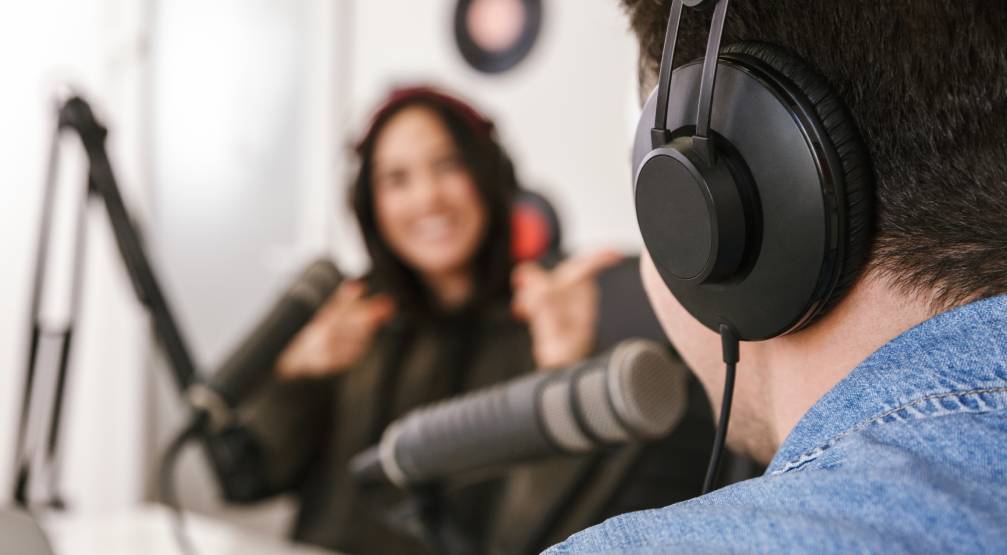 Albertans have great pride in their province.

There’s pride in knowing our landscape, our history, and our people, and when given the chance to do so, Albertans will share that story.

Lately, we’ve had more time on our hands than ever before to explore our hobbies and discover new interests. One endeavour many people had the time to finally try for themselves was podcasting. With so much time at home and unused creative energy, it was the perfect outlet for many — and for those who just love to listen — there was more time for that too.

Many podcast libraries are filled with subscriptions to niche and familiar topics, but not enough people are listening to the incredible stories being told right here in Alberta.

Here are seven amazing podcasts recorded right here in Alberta, depending on what you’re in the mood to listen to.

The Read Along: A mini book club for your ears

The Read Along, hosted by Anna and Scott, have designed their podcast to function like a book club without the pressure of having to keep up. They will announce a book they’ll be covering, and then each episode will be one chapter at a time. They never read ahead, and they release episodes weekly for you to follow along.

In each episode they banter, catch up with each other, and then talk about what they liked and didn’t like from the chapter, and how it affects the story overall — just like any book club.

Currently, they are on Chapter 16 of Black Leopard, Red Wolf by Marlon James. This is the first in a trilogy, a dark fantasy story that many have called the next Game of Thrones. 2020’s Sexiest Man Alive Michael B. Jordan’s production company recently purchased the rights to this epic tale.

This is a podcast where two movie-loving sisters — and sometimes a guest — rewatch movies they loved when they were kids. The best part is listening in to see if they still love the movie, or if they now completely hate it.

Many of the films are from the ’80s. The movies they choose are often so offbeat and irreverent, some may have never even heard of them, but with humour, sarcasm, and random tidbits of information, every episode is a great listen.

Some of the movies they’ve covered so far are Ghost, Three Men and a Baby, and Cool Runnings, set in Calgary for the 1998 Olympics. They release two episodes each week — one to cover the movie, and the other being a trivia episode to guess what movie they’ve decided on covering.

For lovers of craft beer

The craft beer scene in Alberta has exploded in popularity over the last decade, which easily explains why this informative podcast has done so well. Craft Beer Guidecast is a companion piece to the Alberta Craft Beer Guide Book, highlighting all of the makers and shakers in Alberta brewing.

Hosted by Andrew, almost every single episode is an interview with an Alberta brewer. They talk about everything from the business side of brewing, to the brewing process, and of course, the beer itself.

A great starting point is to look over the episode list, find your favourite Alberta craft brewery, and hit play to learn more about the beer you love and the people who make it.

For those craving cultural conversations

The inability to see one another has deprived us of quality conversations. Listening to the Speak On That! podcast is a chance to get it back into our lives. It isn’t an information dump, or a list of facts on a subject, but a back and forth that we’re made to feel a part of.

Episodes are released weekly and are hosted by two queer Black folk, Ali and Lenah. Like a flowing conversation with a true friend, they unpack life, pop culture, and the news of the world — always with a sense of humour and a determination to help learn.

Sometimes with a guest, episodes have included interracial friendships, colourism, self-care, and cancel culture — while still managing to talk about what’s new with Beyoncé.

For those searching political commentary

The Daily, a podcast from The New York Times, is consistently near the top of most popular podcasts. Alberta Advantage is, in many ways, Alberta’s version of that winning recipe. Each episode is only 30 minutes long, provides analysis and commentary on local and provincial politics in Alberta, and often with a left-wing point of view.

Alberta Advantage dives into the specifics of the political landscape here in Alberta, covering what might otherwise be missed in the news. Recently, they have gone over wildcat labour strikes, the history of Calgary and the Tsuut’ina people, and what it might look like for Canada to mobilize against the increasing threat of global warming.

In each episode, you’ll learn something new and important about the place you may have lived your entire life.

Conspiracy theories are often dangerous and misleading, as we’ve seen in the news recently. In It’s a Conspiracy, hosted by Andrew Scott, conspiracies are made fun again.

Scott finds a way to educate his listeners on fun conspiracies we know and love, like Bigfoot, but also lesser known historical events with unexplainable stories, like in the “What’s DA deal with DA Vinci” episode.

Every episode is filled with joy and excitement, so much so that you’ll be laughing along with them. You’ll hear theories about your favourite TV show, urban legends from your hometown, and discussions over whether or not Prince Charles is a vampire.

Capitalizing on the enthusiasm for true crime stories, Crime Beat is possibly the most popular podcast to ever come out of Alberta. Crime Beat, winner of the Edward R. Murrow Award, is hosted by Canadian crime reporter Nancy Hixt.

Hixt takes her listeners into the rabbit hole of Canada’s most high-profile criminal cases. New episodes come out every other week, exploring the story, and providing you details you definitely didn’t hear in the news.

You’ll be astonished (and horrified) you didn’t already know these true stories.