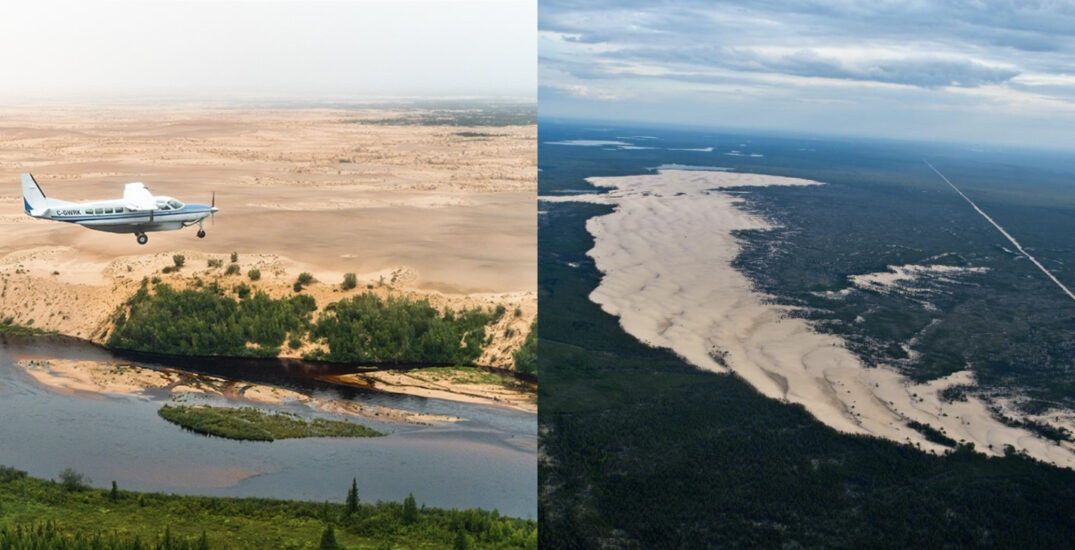 You may think that you have to head to the Sahara Desert or South America to experience stunning sand dunes, but you can actually find some right here in Alberta.

The Athabasca sand dunes are located in the Maybelle River Wildland Park, 200 kilometres north of Fort McMurray in the Wood Buffalo region.

According to Travel Alberta, the area features 12-metre-tall sand dunes along with 60-metre-high kames (steep-sided mounds of sand and gravel deposited by a melting ice sheet) that are among the world’s largest.

This type of sandy wonder can’t be found on this scale anywhere else in Alberta, and while it’s a bit of a trek from the major metropolises, at least you don’t have to leave the province to get there.

And the dunes are actually slowly making their way south, shifting up to 1.5 metres a year. They’re burying jack pine forests and filling in small lakes during this migration, leaving behind a flat, barren plain.

Explore Wood Buffalo says that the combination of the Athabasca sand dunes and the surrounding landscape of forests, lakes, and marshes make the area an outdoor adventurer’s paradise.

Even just getting to the dunes is an adventure in itself. A winter road from Fort McMurray to Fort Chipewyan provides ATV access to the edge of the Wildland Park. The ecological reserve is just over a 10-hour drive from Calgary and seven-and-a-half hours from Edmonton.

Rustic, lakeside campgrounds are available on a first-come, first-serve basis.

A post shared by iROCKER STAND UP PADDLEBOARDS (@irockersup)

The Athabasca Dunes Ecological Reserve is home to a number of flora and fauna. You may spot beavers, muskrats, black bears, red foxes, lynx, wolves, red squirrels, moose, river otters, and minks in the area.

And if you’re a birdwatcher, take note: Arctic terns can be spotted nesting in the reserve – and these birds aren’t known to nest anywhere else in the province. On lakes in the region, you may find nesting loons and other birds including the common tern, common nighthawk, and willow ptarmigan.

“Come out and enjoy what Alberta’s Sahara has to offer,” reads Explore Wood Buffalo’s website. “You won’t be disappointed.”

So what are you waiting for? Book a trip to this “desert oasis” in northern Alberta and experience it for yourself!