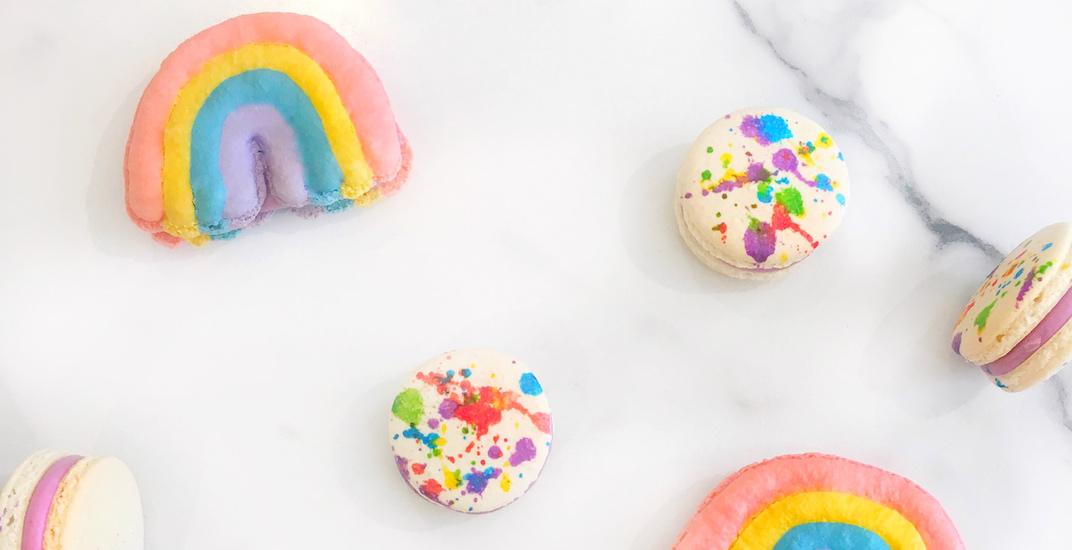 This year Calgary’s PRIDE Week will be bigger and better than ever before; with an array of activities throughout the week.

From art exhibits around town to delicious eats, here are 7 things to see and eat during PRIDE.

The Alberta Treasury Branch (ATB), has been showing their community PRIDE for years by displaying the city’s first ‘Pride Walk’ outside their Stephen Avenue main branch. This year, a new activation will feature an art exhibition curated by ACAD and presented by ATB where artists where asked, “What does Pride mean and how do you show your ‘True Colors’?”

Located in front of the Calgary Tower on Stephen Ave, this year will see the return of Pride Walk, Calgary’s rainbow cross walk.

The first of its kind in Calgary… More details to come soon on this exciting installation.

Where: Intersection of 4 Street & 17 Avenue SW
When: During Pride
Cost: Free

For 2 days only, Ollia will be selling specialty Rainbow shaped macarons. $1 from each macaron sold will go to Camp fYrefly, a four day camp retreat which helps empower youth in the LGBTQ+ community to become leaders of positive change

Start your mornings off with rainbow bagels during Pride Week with these labour intensive Rainbow Bagels for Bagelinos. And don’t forget to pick up a tub of their homemade funfetti birthday cake cream cheese with a side of sprinkles! Bagels must be pre-ordered prior to the August 25 pick up date.

After hosting a ‘Create Your Pride’ themed flavour contest, the winning flavour ‘Gold Star’ Gelato, a blend of honeycomb gelato with creamy caramel swirl, pieces of honeycomb brittle and just a hint of camomile, is being crafted for limited edition sale throughout pride week.
$1 from each scoop purchased in Fiasco’s cafe will go back to Pride Calgary while other single servings will be handed out a various Pride events for free.

After hosting a cut throat cocktail competition with LGBTQ+ influencers, the Hyatt’s bar staff selected two specialty cocktails to be featured on their menu.