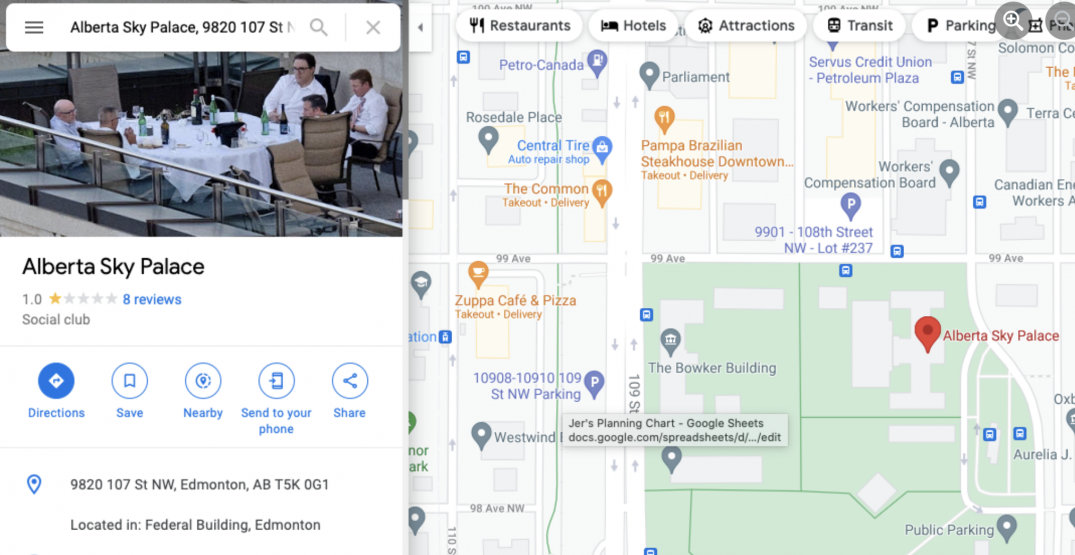 After gaining notoriety on social media, the Alberta government’s “Sky Palace” got its own listing on Google Maps.

Alberta Premier Jason Kenney and several cabinet ministers shared a meal on an outdoor terrace at the Sky Palace, an office at the Federal Building in Edmonton, and photos of the gathering were shared across the internet earlier this week.

The event drew criticism from many Albertans, who pointed out that current public health guidelines in the province state that attendees at outdoor gatherings must remain physically distanced. For outdoor patio dining at restaurants, up to four people of the same household can be seated per table.

As of June 1st, outdoor gatherings are allowed if there’s social distancing, no indoor component & max 2 households is the goal.

Unless you’re the @UCPCaucus. On the roof of the sky palace.

The gathering prompted the creation of a Sky Palace parody website, with links for visitors to “Learn More,” “Donate to the NDP,” or make a reservation for themselves at the infamous venue. However, if website visitors try to make a booking, they’ll come to a message that says, “Unfortunately, this venue is only for Tory elites.”

The Sky Palace even made it onto Google Maps; however, the listing has since been taken down.

“You know the Premier’s Sky Palace dinner scandal is bad when the infamous picture of the soiree pops up on Google Maps,” said Alberta NDP Leader Rachel Notley in a Thursday evening Facebook post.

In a Wednesday Facebook post, Notley re-shared photos of the event and stated, “Albertans do not need their leaders to break the rules, and do it on the top of the castle. That is not how you lead during the crisis.”

The Google Maps listing put the Sky Palace at 9820 107 St NW in Edmonton, inside the Federal Building. The hours showed 9 am to 5 pm, and a link to the venue’s parody website was included.

Before it was taken down, the Sky Palace had multiple reviews on Google, with a one-star rating.