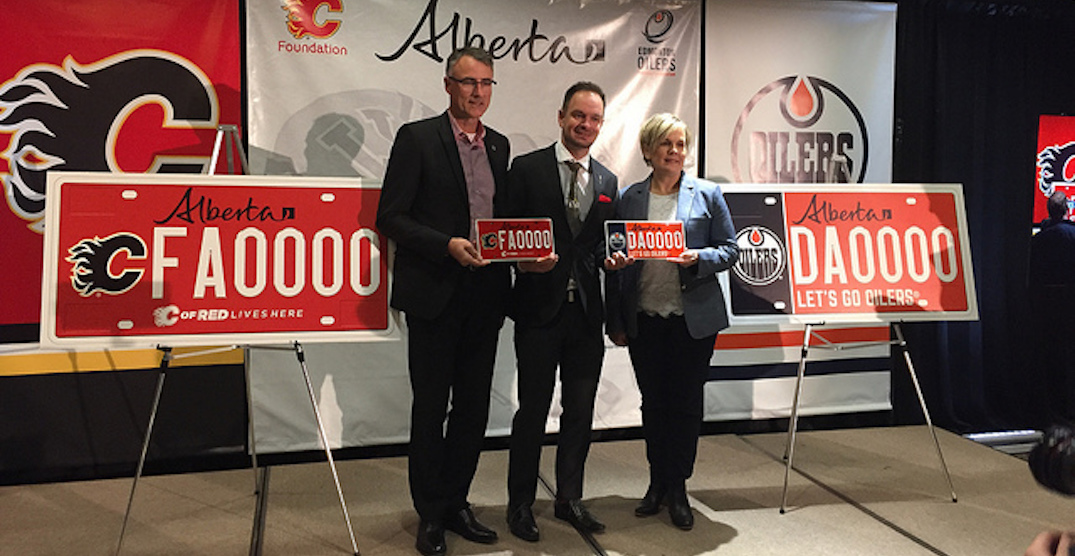 The Battle of Alberta has made its way onto government-issued licence plates.

Starting Monday, November 19, Albertans will be able to show their support for their hometown hockey team everywhere they go — as long as they’re travelling in their vehicle.

Two new specialty licence plate designs have been unveiled by the Service Canada that feature the logos and slogans of the Calgary Flames and the Edmonton Oilers.

“Albertans are passionate about hockey,” said Minister of Service Alberta Brian Malkinson, in a release from the Government of Alberta.

“We’re pleased to give them a way to not only express their loyalty to their favourite NHL team on their vehicles, but also give back to their communities. I’m looking forward to seeing the Battle of Alberta extend to licence plates on our highways and roads.”

The plates can be ordered through Alberta registry agents for $75 plus their registry agent charge — which isn’t a bad price to pay, given that $55 of every plate purchased will go towards the Calgary Flames Foundation or the Edmonton Oilers Community Foundation.

“We are very appreciative of the Government of Alberta for inviting us to participate in this program,” said John Bean, the president of the Calgary Sports and Entertainment Corporation.

“We look forward to sharing the proceeds raised by this initiative with charitable and other organizations based in southern Alberta in support of health and wellness, education and amateur and grassroots sports.”

Plates will be mailed to their recipients after the order is placed, and to order the plate you’ll need your driver’s licence and a Bill of Sale/proof that you own the vehicle you’d like the plate for.

REgistry agents near you can be found at the Service Alberta website.