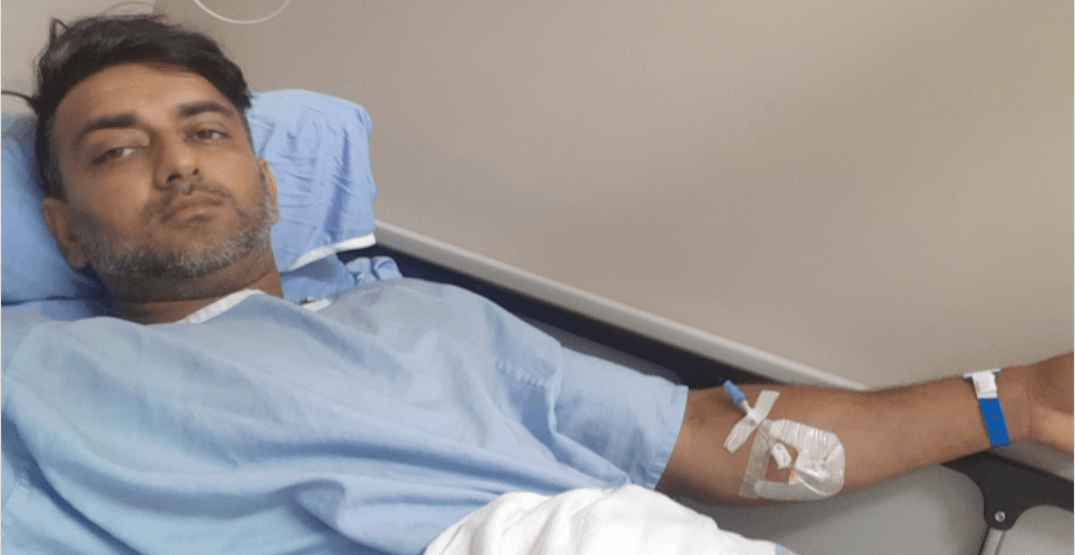 A 36-year-old father of four is in hospital with serious injuries after he was was assaulted while walking to his car after his work shift at Vancouver International Airport (YVR).

According to police, the incident took place at the airport’s International Terminal Building east parking lot, just before midnight on July 14.

Richmond RCMP Cpl. Dennis Hwang told Daily Hive that officers were called to the scene for reports of an assault in progress, and upon their arrival, found the victim “suffering from injuries consistent with a physical altercation.”

The victim, Amit Prasad, was treated at the scene by emergency medial personnel and subsequently transported to local area hospital.

Following the assault, Hwang said said a suspect fled the scene, but was intercepted by police.

“Additional officers were dispatched” and “a 20-year old man was arrested,” he said, noting that the person arrested “is known to police.”

In the meantime, Prasad is reaching out to others for support while he recovers.

“As I was walking towards my car after work around 11:45 pm, I was attacked by six guys,” he writes on GoFundMe.

“They kicked my back so hard that I have [a] fracture in my spine in three places.” An x-ray has revealed a fractured cheek, as well.

He adds that the attack “has limited me from walking and working.”

To make matters worse, Prasad – who is the father of four children from ages two to 16 – writes that he is the only working person in his family.

Hwang said that both the victim and his assailant were known to each other, and that “other arrests may be forthcoming.”

He added the investigation is ongoing.