Richmond RCMP are investigating a bomb threat made at Vancouver International Airport over Twitter this afternoon.

Just after 3 p.m., a Twitter user named The Kram (@kramcer) tweeted “@yvrairport have fun finding out where the bomb is in the luggage.” Moments later, YVR tweeted back, alerting the person they had notified the RCMP.

@kramcer We take these kind of threats seriously, we’ve notified the RCMP.

While The Kram’s tweets are now protected after numerous allies on Twitter advised him to set his account to private, he later claimed he was “so scared” and considered running away from home. He also tweeted a casual apology at the airport a few hours later, just after making a joke about prison rape.

Both YVR and Richmond RCMP say no delays or operational disruptions were caused because of the threat.

“We have officers from our YVR Detachment along with officers from a number of specialized disciplines working with YVR to ascertain the legitimacy of this online posting. The Richmond RCMP is taking the comments made in the posting seriously,” says Corporal Dennis Hwang. “There is no impact to operations at YVR at this time.”

A spokesperson for YVR said the airport takes these kinds of threats seriously and safety and security remain their number one priority. 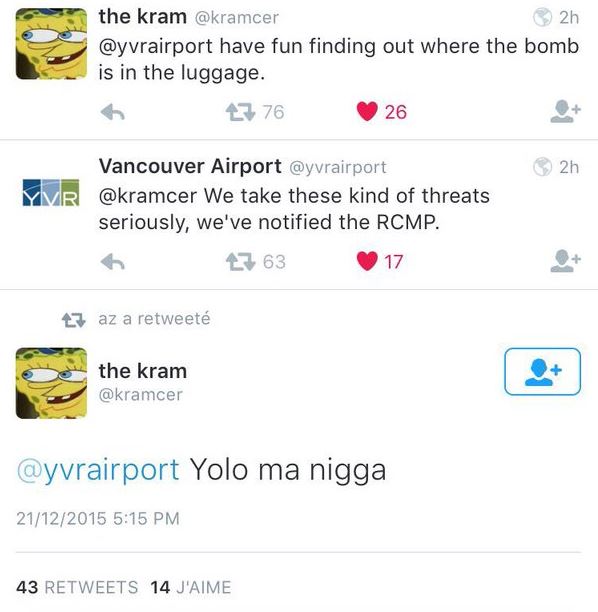