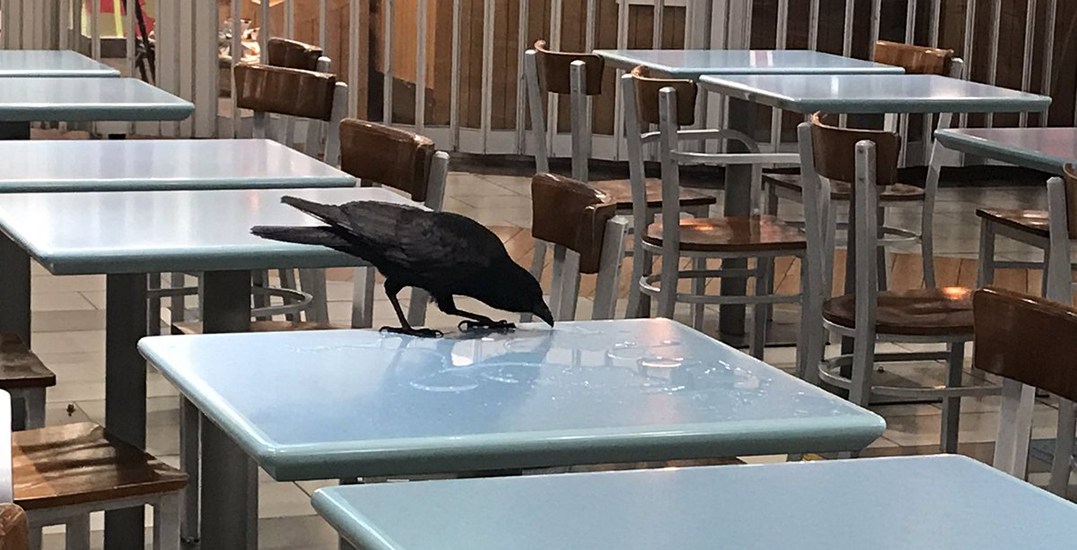 An unexpected guest has found a new home inside the YVR Airport.

And it’s safe to say that they’re not here for a layover.

Posts on social media dating as far back as several months ago have documented a crow that has made a home for itself within the domestic departures area.

Has anybody else met the @yvrairport resident crow? Apparently it’s been here a few months now after losing its way. @AirCanada staff have just stopped by to offer it a treat. pic.twitter.com/LEft9tasJu

It’s undetermined whether it’s a single crow or multiple, and it’s difficult to say how long they’ve been in the airport for, but according to YVR staff, it happens more often than you think — they even have a webpage for it.

“As the largest building in BC, with hundreds of doors and windows, birds can make their way inside the terminal from time to time,” reads a section of the YVR Airport website, titled “Birds in the Terminal.” “The birds typically find their way out on their own, however, some opt to say.”

Someone tell me about the resident crow (small raven?) at the Vancouver airport @yvrairport, right by gate C48 this afyernoon. So chatty! pic.twitter.com/C7JYWzzFJp

@yvrairport there’s a crow inside at gate C46 pic.twitter.com/RZvlz5uU0j

Airport staff also explained to Daily Hive that each time a bird is found, a wildlife team ensures that the animal stays out of distress and attempts to safely remove them if necessary.

And while this crow has been more than welcome, staff have gone so far as to cover several pieces of artwork around the airport — a necessary precaution to prevent any damage being done.

“The crow is welcome to enjoy the space during its visit, but its excrement can cause damage to our beautiful artwork, which is why we have employed this protective wrap,” reads a sign put up near one of YVR’s art pieces.

“Please refrain from feeding the crow” Which does beg the question…what does the resident YVR airport crow eat? pic.twitter.com/qVn6FwVnKN

“This difficulty is compounded by security requirements, making it difficult to provide exits.”

Rest assured, though, as the airport only employs non-lethal measures to safely relocate the birds — thin nets, and cages with water and food are often used.

Fortunately, there aren’t any koi or live animals for the crow to chomp down on — but you might want to keep an eye on your pre-flight snack.