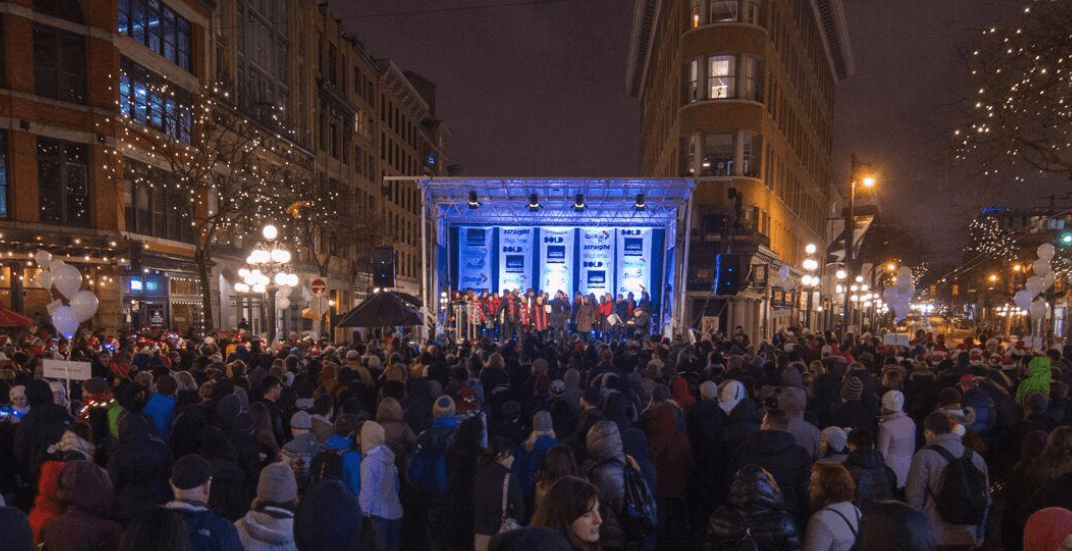 Hundreds of voices from over 20 of Vancouver’s best choirs will again echo through the streets of Gastown on Thursday, December 7, 2017 during Yule Duel: BC’s largest outdoor carolling competition.

The cobblestone streets of Gastown will be closed that evening and festooned with holiday lights as Yule Duel returns for a third consecutive year.

In the past, the event has also attracted thousands of spectators, who come to hear a choral “battle royale” hosted by Christopher Gaze, Artistic Director of the Bard on the Beach Shakespeare Festival.

Visitors wandering down Water Street will see choirs with singers of all ages stationed along the way. They’ll be performing holiday season favourites sung in a range of languages and choral styles including rock, pop, gospel, and barbershop, as each choir tries to stave off elimination in the competition.

For a donation of $5, spectators can buy voting ballots to help their favourite choirs get into the finals for the dueling sing-offs. Funds raised will go to May’s Place, a hospice providing compassionate end-of-life care to the most vulnerable in Vancouver’s Downtown Eastside.

Gastown merchants will also be open during the event which runs from 6 pm to 9 pm.

Admission: Free, but a $5 donation to May’s Place is suggested.