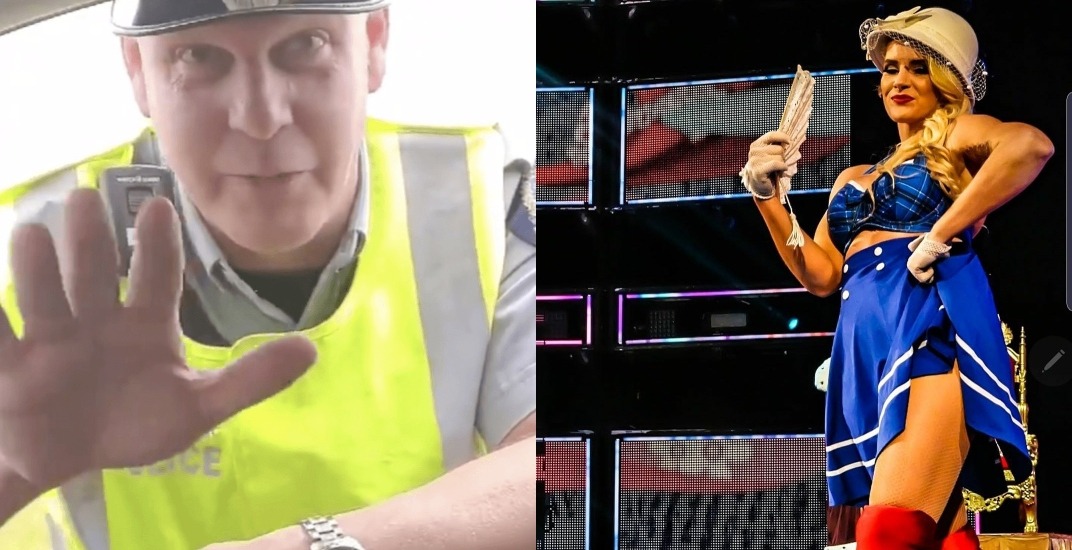 Apparently, the wrestling wasn’t the only thing fake about Lacey Evans’ visit to Edmonton this weekend.

The WWE superstar drew national attention when she posted a video of her apparently receiving a speeding ticket before Saturday’s event at Rogers Place.

In the viral video posted to social media on Saturday morning, Lacey pulled the “Do you know who I am?” card before rudely snatching the ticket from the officer’s hand.

“You nasty thing, I’ll pay the ticket,” she said. “I hope you have a terrible day. Canada is terrible and I can’t wait to get back.”

An RCMP spokesperson has confirmed with Daily Hive that the traffic stop was legitimate, though they couldn’t provide any additional information. Evans indicated on Monday that at least one element of the video was staged.

She never broke character during the interaction, playing the angry and entitled American role while the officer could not have been more polite:

Evans, whose real name is Macey Estrella-Kadlec, finally broke character briefly on Monday to claim that the video was “created by both parties” to promote the event.

“As prior law enforcement myself and a United States Marine, I do not condone, agree with or promote disrespecting or making LEO’s jobs harder than they already are,” she wrote. “The video was created by both parties to promote the local live event taking place in the Edmonton area.

“As a sports entertainer it’s my job to not only entertain but also set the proper example. So with that being said… I’m glad you all were entertained but if you ever try to honestly disrespect or put my brothers and sisters in blue in harm… I hope you get what you ask for.”

A native of South Carolina, Evans enlisted in the Marines at age 19, serving as a military police officer with the Special Reaction Team, a group responsible for security at bases when they’re under terrorist threats or hostage situations.

Evans kept up the anti-Canadian schtick throughout the weekend, answering a request for interview from City News Edmonton by saying “I wouldn’t talk to ya’ll nasties if you paid me.”

Here's an interview. He was a nasty, yall are nasties & I am already in America washing that Canadian scent of my clothes. I wouldn't talk to yall nasties if you paid me. Call @NatbyNature..shes a nasty just like yall & loves to run her mouth. My lawyer will speak for me. 💅👒 https://t.co/ddY7TWQOkP

She played the heel role perfectly, continuously ripping into Canada:

The only thing the harts run is their Classless Canadian mouths sweetheart.

But now that we are back in America and #RAW is tomorrow….. How about I run you out of @wwe and into retirement where you belong. 💅👒🇺🇸 #YaNasty https://t.co/1ewvbLolr2

Single handedly taking down Canada one nasty at a time

Now that I'm back in 🇺🇸 I will be checking into a spa for the duration of the day. My lawyer is on the case & I will be declining further comments or interviews while Im getting treated like royalty💅👒#Unlikeyall #YaNasty pic.twitter.com/kRFjRi0nMa