The Utica Comets unveiled their new third jersey for the upcoming 2015-16 AHL season today (apparently they play ice hockey in the dark, under the cover of a fine smokey haze, for added thrills), and they went in a direction many Canucks fans thought Vancouver was headed in with their third jerseys several years ago: green.

Now, before we dive into jersey talk, let’s get a couple things out of the way.

2) Many people are on the “enough with the changes, just stick with one jersey please!” train, and that’s fine. This is just a hypothetical question, so let’s just enjoy a fun verbal back and forth on suitable colours that bring out the green in Henrik Sedins’ eyes.

That being said, should the Canucks decide to head down a different third jersey path, what would people feel about going full Kermit, and using green as the main colour?

The Johnny Canuck logo is a bit too cartoony for my taste, but if the Canucks want a different logo, that might be on their radar. Plus, it’s a third jersey, if ever you’re going to be a bit over the top in your style, that’s your time to do it. 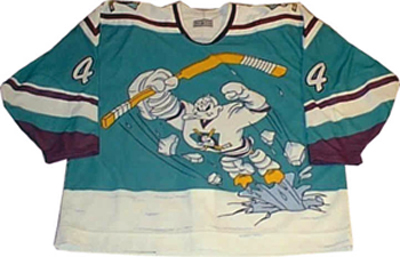 I wish I could have been in the room when that jersey was created. “We want a ferocious duck, but like, a hockey playing one. Maybe he’s jumping out of the ice? That sounds bad ass, right? Who wouldn’t want a ferocious, ice breaking duck, ready to play in net at the drop of a hat???”

The one thing I like about the idea of going green on the third jersey, is that it definitively separates itself from the main jerseys the Canucks use. As it stands now, if you take a quick glance at the Canucks on the ice, the thirds and the home/away jerseys look almost the same, sans the logo. If you have a third jersey, you might as well make it stand out from what you normally wear.

Of course, the other solution is to make the 1994 jersey the Canucks permanent third jersey. Right? Right!

With the Canucks and Utica mirroring each other quite closely when it comes to merchandising, is Vancouver testing the markets response to the new third jersey? Or is Utica simply trying to stand out from under the shadow of its big brother? Is Utica trying to stage an uprising? Should we be worried?? Does Utica need to be stopped???

What do you think of the idea of embracing green on a Canucks jersey? Weigh in and let us know!