Imagine this: you hear a low rumbling, not unlike a freight train, and then all of a sudden the ground beneath you starts shaking and knocks you off your feet. Buildings around you collapse, roads split and fires start from cracked gas lines and damaged electrical lines.

People around you are screaming, and those that run out into the streets of downtown Vancouver are either injured or killed by falling debris.

This is what a worse-case scenario earthquake might be like with Vancouver at the epicentre, according to a new report released by the provincial government.

The release used data and technology from the US Department of Homeland Security and the Federal Emergency Management Agency to come up with the figures and estimations needed for how an earthquake of these proportions might look in our province.

The BC Earthquake Immediate Response Plan details estimations of damages and casualties for a magnitude 7.3 earthquake.

Emergency Management BC chose that magnitude earthquake based on historical records; the largest recorded quake in the province was in 1946 on Vancouver Island and was 7.3 on the richter scale.

A lack of access to clean water, sanitation issues, and displaced Vancouverites in interim housing are problems that could persist for months.

Below is a chart on how the government would implement emergency strategies following a devastating earthquake: 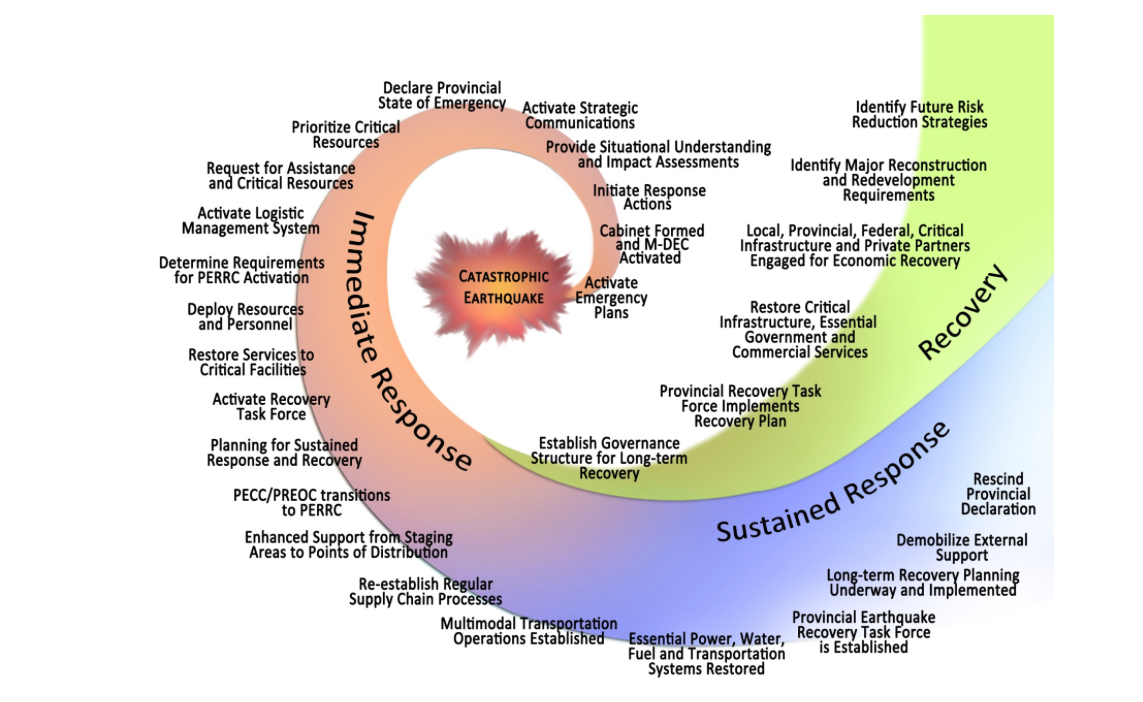 Infographic courtesy of Emergency Management BC

But the question still remains: how prepared are the public and the government for dealing with the “the big one?” The storm that recently swept across B.C. – which is minuscule by comparison – might be an indication of how we handle emergency situations.

“I think this is a really good wakeup call,” Minister of State for Emergency Preparedness Naomi Yamamoto told Vancity Buzz.

“We’re probably not as prepared as we should be. We should prepare for a power outage that may last three days. And that happened to a few folks, even with this windstorm.”

Yamamoto said it starts with having an emergency preparedness kit in your home that includes a first-aid kit, a battery powered radio, a flashlight, and if you can find one, a cellphone charger that is powered by a hand crank.

You should also have bottled water and canned food on-hand.

As for the province, Yamamoto said they are working on strategies to better prepare for an event like this one, starting with the implementation of her role as Minister of State for Emergency Preparedness, which is a new government position for B.C.

“We have been, perhaps, a bit lackadaisical when it comes to being prepared for an emergency,” she said.

“As a province, I want to make sure that we assume the lead in coordinating any emergency or disaster, but we can’t do that unless we are well-coordinated with other local authorities.”

As far as BC Hydro and Fortis BC go, Yamamoto said they have their own emergency response plans in place, but it’s hard to speculate the extent of what a catastrophic earthquake will do to our utilities.