1. Homeless Santa gets a new suit

After thieves stole his Santa suit, a homeless man from New Brunswick has received a helping hand from some kind strangers. Fernand Gautreau has lived on the streets for three years and says that he was sleeping when thieves took a bag of his belongings. Gautreau was very devastated to find out his Santa suit was also stolen. Every year he dresses up as Santa to pass on Christmas cheer to people walking by on the streets. Gautreau told a woman named Aleisha MacPherson what happened and she posted his story on the Moncton Pay It Forward Facebook page. A man named Claude St. Coeur saw the post and bought Gautreau new clothes and a new Santa suit. “The joy in that gentleman’s face, it was just priceless. The feeling in his heart, you could tell — no money can buy that,” said St. Coeur, according to CBC. 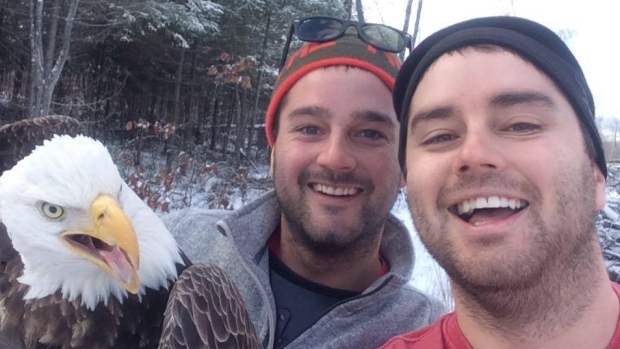 Neil and Michael Fletcher were out hunting in Sudbury, Ontario, when they noticed several ravens circling around something. The pair got closer and discovered that the ravens were surrounding a bald eagle caught in a hunting trap. Neil and Michael knew they had to help free the eagle so the slowly approached the bird and released its foot from the trap. They also managed to capture a selfie with the eagle and the picture has since gone viral. “Me and my brother, we’ve always been in the bush, always been hunters. And we’ve always had a lot of respect for bald eagles,” said Neil, according to CBC.

Dying Barrie man Frank Nelson is giving away $1,000 to strangers as part of his bucket list. https://t.co/Ro1nKZZgpz pic.twitter.com/J5jhtUL89k

Frank Barrie is nearly half way through his bucket list. The 59-year-old grandfather was diagnosed with colorectal cancer and in October of last year he was told he only had one year left to live. He decided that he was going to help pay it forward by donating $1,000 to 50 families in need as part of his bucket list. His goal turned into a big project, which even has a Facebook group with 10,000 members. So far Barrie has helped 34 families.

“The fact that people deem it to be so special and amazing, if you think about it, it’s partly what’s wrong with society. We should all be helping each other. We’re all part of the same human race,” said Barrie, according to the Toronto Star. 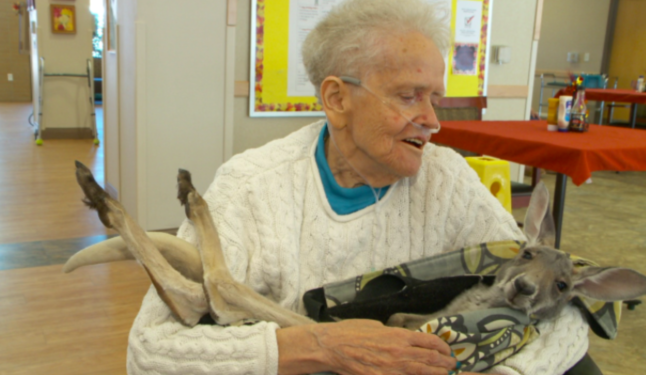 Therapy animals are regular additions to the Salt Like City Veterans Home, but Charlie the baby kangaroo is by far the most popular amongst the seniors living there. Many of the retired veterans find Charlie comforting and think of the animal as a pal. “People don’t believe that they can walk over and pat a kangaroo, and I say never miss a chance, you’ll never know when it will happen again,” said resident Art Nunn.

Members at a church in New York, are offering to adopt a newborn baby abandoned at a nativity scene located on the church front lawn. The baby was found after a custodian heard crying coming from the nativity scene’s manger. According to the church pastor Christopher Heanue the baby is doing well. “It was truly a Christmas story,” Heanue told ABC.

Timur the goat and Amur the tiger are an unlikely pair of pals living together at the Primorsky Safari Park in Russia. Timur was actually meant to be a meal for Amur, but the tiger decide to befriend the goat instead. However, the friendship didn’t come without some drama. Timur ended up chasing Amur out of his sleeping place, forcing the tiger to sleep on the shelter’s roof. Despite Timur’s bossy behaviour, the goat and tiger have gotten along pretty well.

7. Baby brought back to life twice after car accident

Baby brought back to life, twice, by men who stopped at crash site: https://t.co/eMHSVV4I35 pic.twitter.com/ldE7a3WYsz

When Mike Spicer saw an overturned vehicle off the side of a highway in Kansas, the retired highway patrol officer knew he had to help. He approached the vehicle and saw a baby was involved in the accident. The baby, named Ryder, appeared to be dead, but Spicer began to perform CPR and within minutes Ryder took a deep breath and began to cry. Ryder was taken to hospital and is expected to fully recover. But what makes this story even more amazing is that Ryder was pronounced “dead” once more before Spicer arrived on scene.

A Good Samaritan named Tony Calvillo saw the crash first and helped Ryder’s mother and two young siblings escape from the wreckage. He saw Ryder in the back seat and smashed the window open. The baby was showing no signs of life and Calvillo began compressions. Suddenly, Ryder came back to life, but when Spicer arrived to help, the baby died again. It was a miracle, but little Ryder’s resilience could not be defeated.

Presents for Syrian children bound for BC: See what Selina Prevost has made. 6pm @CBCVancouver News Ch3/HD209 #cbc pic.twitter.com/IP2e9iTHWp

A woman from Coquitlam, B.C., is collecting Bratz dolls and giving them makeovers all for a good cause. Selina Prevost is removing the makeup from the dolls and replacing their clothing with headscarves and long dresses as presents for new Syrian refugee children arriving in B.C. in the coming weeks. She is also preparing teddy bears with Canadian flags sewn on them.

“I have children myself. Seeing the images in the news… my heart [goes] out to the children and the mothers having to go through this,” she said, according to CBC. Tags that read “Welcome to Canada” written in both English and Arabic have been added on each of the toys. Prevost aims to make over 100 teddy bears and dolls each and she is asking the public for toy donations. You can find out how you can help donate here.

9. Man finds out he is a grandfather-to-be through hilarious game

We all could use a funny video to end the day, right? Check out this clip of a man being told he is going to be a grandfather, while playing the Whisper Challenge game. For those of you not familiar with this game, it works by having one person listening to loud music through headphones, while trying to guess what another person is saying by attempting to read their lips. This grandpa-to-be’s reaction will surely make you smile.