Seven-year-old Aiden Wright was playing at Memorial Park in Salem, Massachusetts on Saturday morning when he came across a black checkbook. He opened it to find $8,000 inside. Aiden showed the checkbook to his uncle, who was accompanying him at the park that day.

The little boy was determined to make sure it got back to its rightful owner. So, Aiden and his uncle went to the police station to turn in the book. It was later returned to Elias Santos. “I am so grateful because we don’t have people like this no more,” Santos said. To thank Aiden for his honesty, Santos gave the boy $100.

2. “Miracle Baby” born with most of his skull missing celebrates his first birthday

Jaxon Buell was not expected to survive after birth. In fact, doctors told his parents, Brittany and Brandon, that they may want to terminate the pregnancy because Jaxon suffered from a rare birth defect called Anencephaly, a condition in which babies are born without significant parts of their brain and skull. However, the Buells were not going to give up on their son. When Brittany gave birth to Jaxon, almost half of his skull was deformed by the condition.

Doctors told the parents that Jaxon would only have 10 days to live, but the little boy defied all odds and just celebrated his first birthday. “It’s all been so overwhelming in a positive way because we can’t go anywhere without someone stopping us, and saying, ‘hey, what’s your story?’ or they would have seen his picture and say, ‘hey, look it’s Jax Strong!’ – his nickname! It’s truly incredible the amount of people he has had an impact on,” Brittany told the Daily Mail.

A local Alaskan guide was taking tourists to view polar bears on a barrier island when he spotted a bear trapped in a whaling net. Polar bears are not easy animals to rescue because they can be extremely dangerous and predatory. However, the Inuit people of Alaska have a special relationship with the land and the animals. Local Inuit volunteers went out on their boats, and brought the bear to land, where they were able to keep the creature calm and set it free.

4. Policeman buys man a bike so he won’t have to walk to work everyday 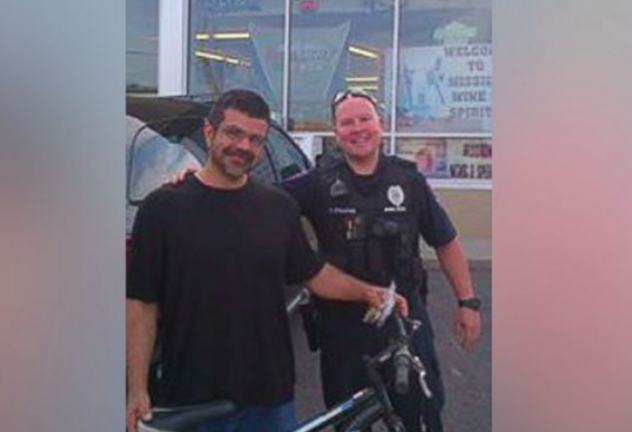 When police in Roeland Park, Kansas received a call about a suspicious man in a park, they were not expecting to end up helping the suspect. But when officer Zach Stamper approached Samuel Meixueiro in the park, he learned a lot more about the man and his struggles.

Meixueiro recently lost his home and he was sleeping in a church. He couldn’t afford a car to get to work, so he walked five to six hours every morning to get there. Meixueiro explained to Stamper that he was simply taking a break in the park before he had to continue his journey to work.

Stamper felt for the man and offered him a ride. Turns out, the two men got along great and after Meixueiro left, Stamper had a hard time simply forgetting about his story. “I was like, wow. My commute, I drive to work and it’s done. I couldn’t imagine spending five hours a day traveling back and forth to work, let alone on foot,” said Officer Stamper, according to Fox4kc News. So Stamper came back to Meixueiro’s work place and brought him a duffel bag to carry his things in and a bike.

“I cried. I couldn’t believe it. Things are so hard for me right now. Any kind of help is just a blessing,” Meixueiro said. “Thank you from the bottom of my heart.” 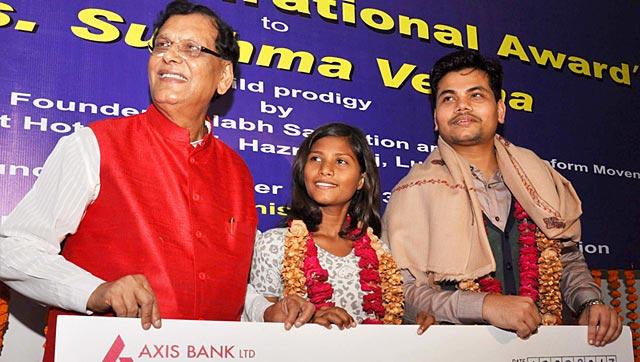 Fifteen-year-old Sushma Verma has not had an easy upbringing. The teen grew up in poverty with a father who worked a dismal paying job and an illiterate mother. But Verma has defied all odds and is now India’s youngest PhD student.

She is currently enrolled at Babasaheb Bhimrao Ambedkar University (BBAU) in Lucknow, where she is studying Biology. “I am extremely happy to achieve this feat. This is nothing short of a dream come true. Coming this far itself is a very big achievement,” she told the Hindustan Times.

6. Girl gives up her own personal record at a school cross-country meet to help a fellow runner 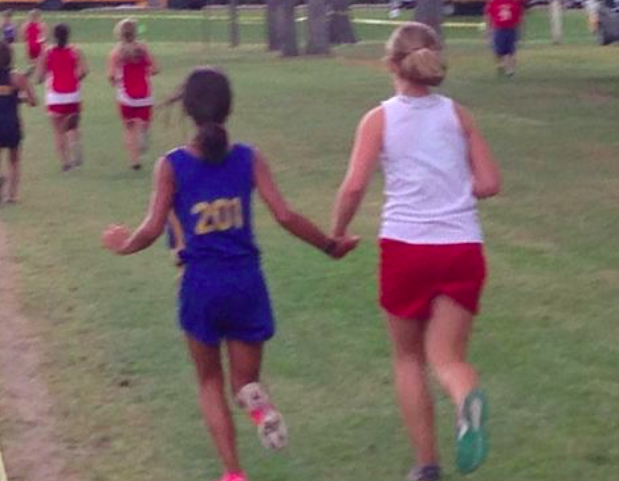 Makenna Finnegan was on her way to break a personal record running a two-mile race at her high school cross-country meet. With half a mile left in the race, Finnegan knew that she was close to the finish line. But then she noticed an opponent limping in pain.

Finnegan stopped to ask the girl what was wrong and she said she was suffering from cramps. Instead of leaving the girl behind, she grabbed her hand and ran with her to finish the race. Finnegan did not  beat her personal record, but she definitely won first place when it comes to sportsmanship. 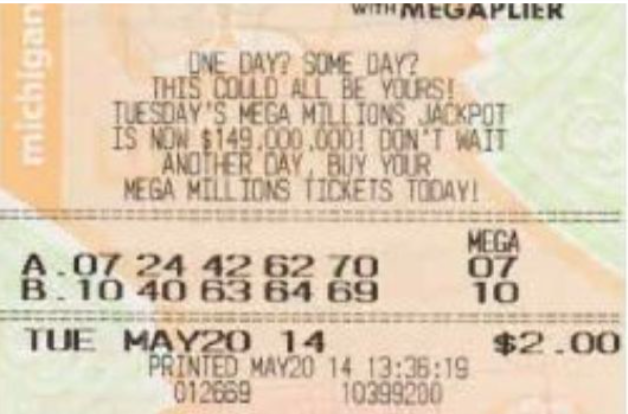 A Michigan woman is $1 million richer, but she didn’t know about it for an entire year. Linda Tuttle purchased a lottery ticket and left it on a pile of mail on her counter. Tuttle forgot about it, until she went to the store she bought the ticket from. The clerk at the store told her that the winning ticket was purchased at that shop, but no one had claimed it. Tuttle went back home, searched in the pile of old mail and discovered that she was the winner all along. 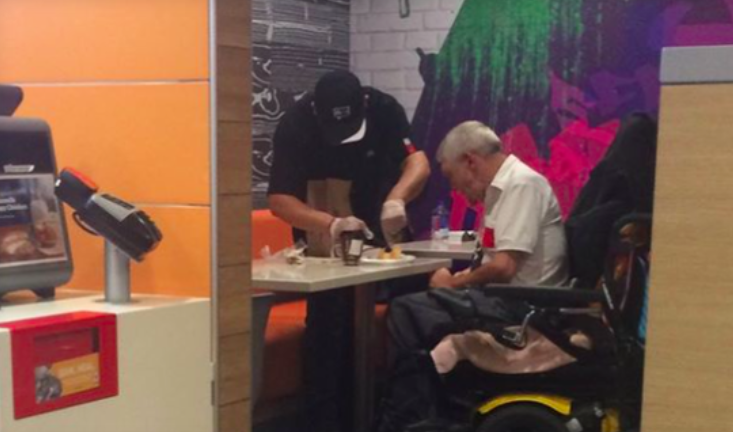 A McDonald’s employee’s simple act of kindness has gone viral. After a handicapped customer had some trouble eating the meal he ordered, a cashier approached the man and started feeding him.

Destiny Carreno took a picture of the heartwarming moment and posted it on Facebook, where it has since gone viral. “This employee, who put everything on hold for this man, went above and beyond his responsibilities to help this handicapped customer out. That was the kindest and most humble thing I had ever seen,” Carreno wrote in the post.

9. Dad pauses his daughter’s wedding to invite her stepdad to help walk her down the aisle 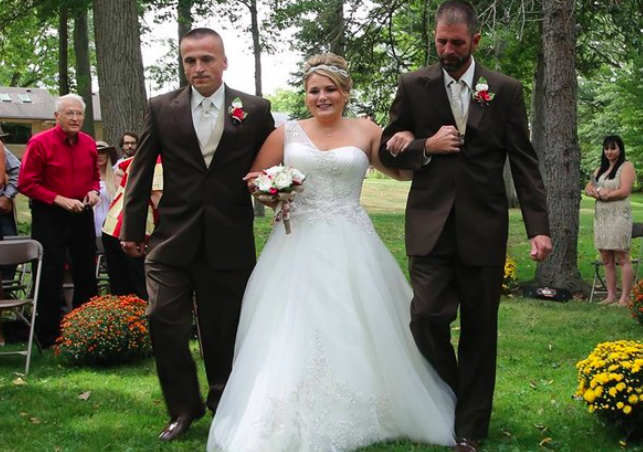 Todd Bachman was getting ready to walk his daughter, Brittany Peck, down the aisle when he stopped the wedding for a heartwarming reason. Bachman went up to Brittany’s stepdad, Todd Cendrosky, and asked the man to join him in walking Brittany to her groom.

Wedding photographer Delia D. Blackburn, captured the beautiful moment on film. Blackburn posted the photos and the story to Facebook, where they have been shared over 500,000 times.

If you need a Wednesday pick-me-up, this video will do the trick. And remember, never come between a girl and her pink Barbie fishing rod.