Each week, we bring you a roundup of some of the biggest stories making headlines around the world. Here are nine things that happened outside of Vancouver last week that you should know about (in no particular order):

Petra Laszlo, a Hungarian photojournalist, was fired from her job after she was caught tripping and kicking refugees frantically running through a police barricade, trying to reach the Hungarian town of Röszke. Laszlo’s actions were recorded on camera and she soon became the subject of criticism for her inappropriate actions. The news station Laszlo worked for, Nemzeti Televízió (known as N1), edited out the footage of her tripping a man and a young child from their newscast.

After it became known that Laszo was purposefully injuring the refugees, N1 called for her immediate termination from the station. Laszlo’s actions have been called an example of the racist and xenophobic feelings many people have towards the current refugee crisis. On Thursday, Laszlo issued an apology that was published in the conservative Hungarian newspaper Magyar Nemzet. “I’m not a heartless, racist, children-kicking camerawoman,” she wrote in the letter. “I do not deserve the political witch hunts against me, nor the smears or often the death threats. I’m just a woman, and now an unemployed mother of small children, who made a bad decision in a situation of panic. I am truly sorry.”

As a result of heavy rainfall, Japan has been hit by intense flooding, forcing over 100,000 people to evacuate their homes. The flooding is occurring in central Japan and it’s so powerful that buildings and homes are being pushed off their foundations and floating away. On Thursday, 40 people were rescued by helicopter from their homes. “The government will work as one to prioritize the safety of the people and do our best to prevent any further disaster,” Japan’s Prime Minister Shinzo Abe said in a statement.

Close to 90 large stone monoliths were uncovered close to Stonehenge in Wiltshire, England. Scientists believe the 15 foot tall stone structures are close to 4,500 years old and were ritual shrines used for religious ceremonies. From an aerial perspective, the 90 stones form a large C–shaped curve. Researchers say that the new discovery will help them learn more about the Neolithic people.

4. Dentist who killed Cecil the lion returns to work 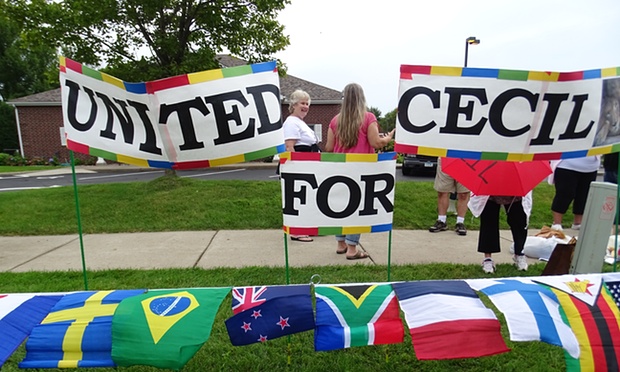 Walter Palmer, the man who shot and killed a lion at a Zimbabwean conservation park, returned to work at his dentistry clinic in Minnesota on Tuesday. Palmer visited Zimbabwe this passed July for a hunting trip. He ended up killing a black-maned lion named Cecil, who was very popular amongst the park’s visitors. Palmer was publicly scrutinized around the world for hunting and killing the lion. The U.S. Fish and Wildlife Service continue to investigate if the killing of Cecil broke any federal laws. Protesters surrounded Palmer’s dental office on Tuesday morning demanding that he be brought to justice.

A new species of the human ancestor has been discovered in South Africa. The species, known as homo naledi, was discovered in October 2013 but was revealed to the public this week. Scientists found the 15 skeletal bones from different individuals belonging to the species. The bones indicate that homo naledi were physically smaller than today’s average humans. However, naledi’s skeletal and feet bones are very similar to those of the modern homo sapiens. Researchers believe that homo naledi lived in Africa approximately three million years ago. The bones were found in the Dinaledi Chamber in South Africa’s Rising Star Caves.

Korean families separated for 60 years will be allowed to meet briefly in October http://t.co/ozIR6K3aOv pic.twitter.com/hseca3Lazs

On Tuesday, North and South Korean officials agreed to allow family members torn apart by the Korean War to reunite briefly in October. One hundred people from each side of the border will gather at Kumgang Mountain in North Korea from October 20 to 26. The family members will be able to see one another for the first time, after being separated for over 60 years.

Venezuela’s official opposition leader, Leopoldo Lopez, has been sentenced to nearly 14 years in prison. Venezuela’s court found Lopez guilty of instigating violence during the nation’s political protests in 2014, where 43 people were killed. Lopez has been awaiting his trial in a Venezuelan military prison since February 2014. His family claims that he has been held in solitary confinement for the entire time and his human rights have been violated. During the opposition leader’s verdict, fights erupted on the streets between pro-government and Lopez’s supporters.

8. Thousands of refugees allowed into Germany and Austria

On Sunday, Austria and Germany announced that they would welcome thousands of refugees stranded in Hungary. The decision came after long, intense talks between Austrian Chancellor Werner Faymann and German Chancellor Angela Merkel. “We have always said this is an emergency situation in which we must act quickly and humanely. We have helped more than 12,000 people in an acute situation,” Faymann said according to Reuters.

Shortly after hearing the news, thousands of refugees in Hungary began to board busses taking them to Austria. Hungary is reluctant to allow refugees to stay as the nation’s Prime Minister, Viktor Orban, stated that the increase of Muslim refugees is a threat to European Christianity. The refugees who were not able to take a bus, began the 170-kilometre journey to Austria on foot. In Germany, supporters and well-wishers greeted refugees as they arrived at the train station in Munich.

9. Kim Davis freed after being jailed for refusing to issue marriage licenses to same-sex couples

The Kentucky clerk imprisoned for refusing to issue marriage licenses to same-sex couples was released from jail on Tuesday. Kim Davis claimed that because she is an Apostolic Christian, her religious and moral beliefs do not coincide with same-sex marriage. While Davis was in jail, a deputy clerk signed marriages for same-sex couples and Davis was told she must do the same if she wants to return to her position. As Davis exited the Carter County Detention Center, thousands of supporters, including Republican presidential candidate Mike Huckabee, greeted her with loud cheers.