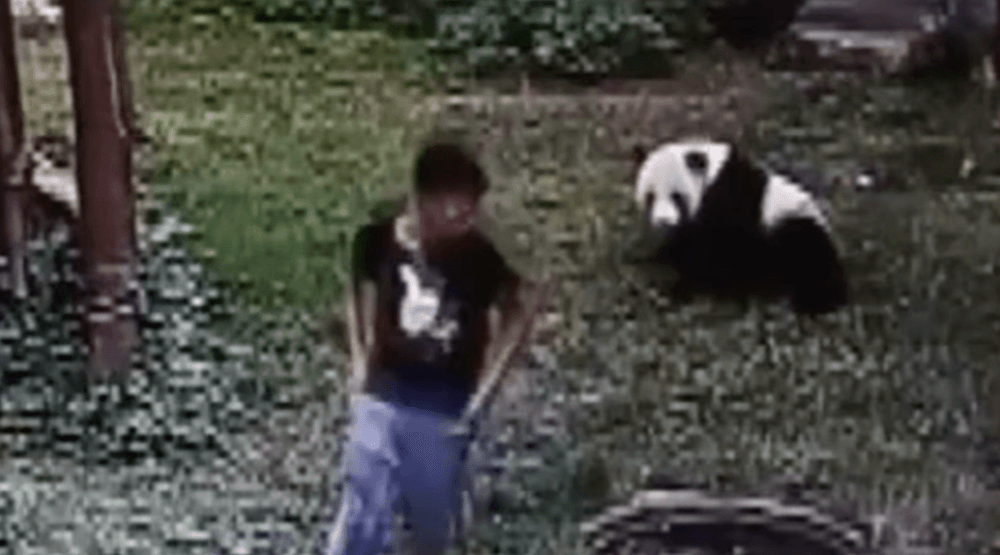 Protests continue at Standing Rock Indian Reservation in Cannon Ball, North Dakota. The protesters are in opposition to the controversial Dakota Access Pipeline – a $3.7 billion project that would transport crude oil from North Dakota to Illinois.

The 1,825-kilometre-long pipeline would carry 470,000 barrels of oil per day. Thousands of Indigenous and Native American protesters and supporters are taking a stand against the pipeline saying the project is a threat to sacred native land and could contaminate water supplies.

Hundreds of perfectly formed snowballs have mysteriously appeared on a beach in northern Siberia. The snowballs range in size from that of a tennis ball to almost a metre across. The snowballs were formed by a rare environmental process where pieces of ice are rolled by wind and water.

3. Man gets tackled by giant panda after climbing in zoo enclosure to impress women

A man got quite the surprise from a giant panda while visiting the Nanchang Zoo in China’s Jiangxi province. The unnamed 20-year-old decided to enter the giant panda enclosure in an attempt to impress two female companions.

Turns out Mei Ling, the giant panda living in the enclosure, was not a fan of the man’s unexpected visit. Mei Ling playfully tackled the man to the ground. The man was uninjured, but his pants were torn to shreds.

A Pakistani gang rape survivor defied odds and walked down the runway at Pakistan’s fashion week on Tuesday. Mukhtar Mai was gang-raped and beaten in public 14 years ago, but now she hopes her story of survival can help inspire other women.

“If one step I take, if that helps even one woman, I would be very happy to do that,” Mai told AP.

Elon Musk’s SpaceX proposal to fuel rockets while astronauts are on board has raised concerns amongst NASA safety experts.

“This is a hazardous operation,” Space Station Advisory Committee Chairman Thomas Stafford told Reuters. According to Stafford, the group’s concern has grown when an unmanned SpaceX rocket exploded while being fuelled in September.

SpaceX requires NASA approval of its launch system before it can send astronauts to space.

6. Over 22,000 people living in shelters after Italy earthquakes

Italian authorities say that over 22,000 people are living in shelters after a series of powerful earthquakes in Italy. Over 100,000 people were affected by the 6.6-magnitude earthquake on Sunday. According to Italy’s Civil Protection Agency, over 15,000 people are being housed in their own communities and over 6,000 are staying in hostels.

The UN says the international community is far behind reaching its goals adopted in the Paris Agreement on climate change. The UN Environment Program said the world needs to cut annual greenhouse gas emissions by 12-14 billion metric tons in order to limit global warming to 2 degrees Celsius.

Over 3,800 migrants from Sudan, Ethiopia, and other countries were evacuated from makeshift migrant camps in Paris.

“This is the city’s largest effort to get migrants into permanent shelters. This is the biggest operation sheltering migrants we have had to face in the last 18 months,” said Christine Gauthier of the Paris region housing department.

Harvard University has suspended its men’s soccer team for the rest of the season due to sexual comments made about members of the women’s soccer team. According to Harvard, “the men’s team continued to produce vulgar and explicit documents rating women on their perceived sexual appeal and physical appearance.”

“The decision to cancel a season is serious and consequential, and reflects Harvard’s view that both the team’s behaviour and the failure to be forthcoming when initially questioned are completely unacceptable, have no place at Harvard, and run counter to the mutual respect that is a core value of our community,” said University president Drew Faust.