This week, the world lost two leaders – one in a battle with his health, and the other with an army of rebels that has stirred up chaos and tension in the Middle East. In addition, new data brings troubling news on the environmental and mental health front, while economic pressures elsewhere start to mount.

At the age of 90 and suffering from pneumonia for several weeks, King Abdullah of Saudi Arabia passed away yesterday. Succeeding him is his 79 year old brother, previously Crown Prince Salman bin Abdulaziz Al Saud. King Salman was also quick to name his half-brother Muqrin as his crown prince and heir, rapidly moving to forestall any fears of a succession crisis at a moment when Saudi Arabia faces unprecedented turmoil on its borders.

The European Central Bank (ECB) has announced that it will inject at least €1.1 trillion (£834bn) into the crumbling eurozone economy. Through quantitative easing (QE) – where they will buy €60bn bonds each month from banks – up until the end of September 2016, the ECB follows in the footsteps of the US, who successfully used QE between 2008 and 2014.

On Thursday, the South African government announced that 1,215 rhinos were illegally killed last year, showing a 21 per cent increase from 2013. “If poaching is allowed to increase at the rates of the previous few years, it could drive the population to extinction in the next decade or two,” said Matthew Lewis, an African species expert with World Wildlife Fund’s (WWF) Species Conservation Program. On Thursday night, Yemeni President Abdu Rabu Mansour Hadi resigned, following shortly after his prime minister and the Cabinet stepped down. This comes just one day after the government and Houthi rebels came to a tentative peace deal. Given that the Yemeni government has been an important ally to the U.S. in the fight against al-Qaeda in the Arabian Peninsula, this move has the American government concerned that political chaos may soon ensue.

The Bank of Canada shocked markets on Wednesday by cutting its key overnight lending rate to 0.75 per cent from one per cent, which had previously remained stable since September 2010. Citing the economic threat posed by plunging oil prices, cut would result in lower interest rates for variable rate mortgages, lines of credit and other loans that float with prime rates, but only if banks lower their prime rates.

Scientists have warned in a new study that Ebola is evolving, rendering some experimental treatments useless. After comparing the current strain to other variants from previous outbreaks, the current virus had differences in more than 600 spots, or three per cent of the genome. They said that of these mutations, they’ve discovered changes in the strain responsible for the West African outbreak and that they need to ensure that that valuable resources are not spent developing therapies that no longer work. The United States and Cuba ended two days of historic talks in Havana with some progress toward restoring diplomatic ties after a half-century of estrangement, but sharp differences over the role of human rights in their new relationship. U.S. top diplomats said they “pressed the Cuban government for improved human rights conditions, including freedom of expression” but “Cuba has never responded to pressure.” They added that they “have to overcome more than 50 years of a relationship that was not based on confidence or trust.” 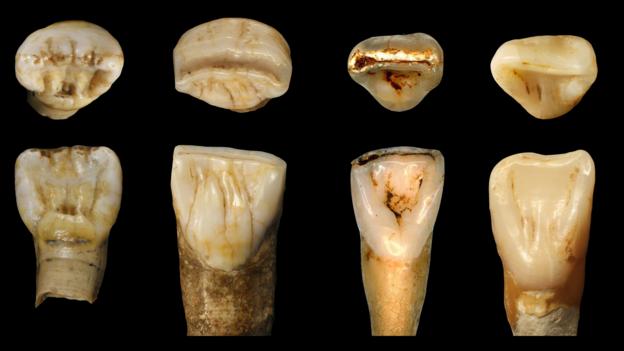 Newly-examined fossils suggest that an unknown species of human was roaming parts of northern China between 60,000 and 120,000 years ago. The Chinese remnants were first discovered in 1976, consisting of skull fragments and nine teeth. In the image above, the teeth on the left are those found, and the teeth to the right are modern human teeth. “What we have seen is an unknown group for us,” Martinon-Torres, one of the researchesrs, says. “It’s not H. sapiens and it’s not H. neanderthalensis. They have a mixture of something very primitive, which is currently unknown.” The mental health report released yesterday shows that 16.5% of Canadians over 15 who have provided care to an immediate family member with a long-term health condition, felt “very high” levels of stress. In addition, suicide rates are higher in Canada than in some other G8 nations, with troubling figures showing that nearly 20 per cent of university students had engaged in self-harm in the past.

Also check out our newest weekly series, published every Wednesday – 9 good things that happened around the world last week.