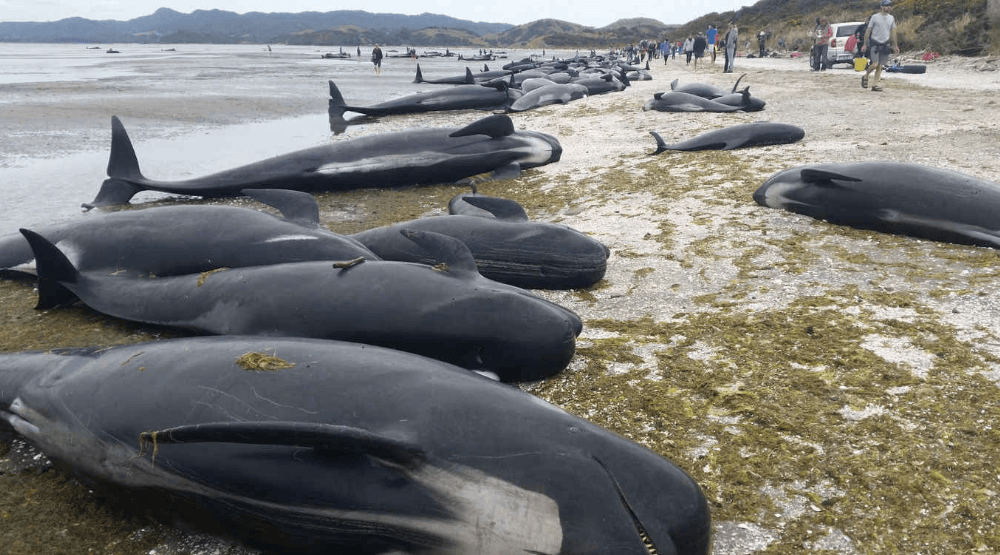 1. Hundreds of whales stranded for days in New Zealand return to sea

Approximately 600 pilot whales were stranded on a remote New Zealand beach, with 400 coming onto shore on Thursday and another 200 on Saturday.

The pod is the second-largest group to be stranded at Golden Bay, located on the northwest tip of the South Island. Volunteers tried to keep the whales alive by pouring water on them, but the majority of the whales died. This is the largest stranding in New Zealand in decades.

Almost all over the surviving whales, over 200, returned to sea on Sunday when high tides came in. The death toll is more than 300, and local authorities are now cutting holes into the dead carcasses to prevent them from exploding like balloons as they decompose on the beach.

Soldiers deactivated what’s thought to be one of the largest World War Two bombs to be found in urban Greece. 📻 https://t.co/wvBeduzOFP

At least 70,000 people in the city of Thessaloniki, Greece must evacuate their homes in order for authorities to diffuse a 500lb World War Two bomb.

The bomb is believed to be one of the largest wartime bombs discovered in urban Greece. According to officials, the bomb is too old to tell if it is a German or Allied explosive.

North Korea reportedly fired a ballistic missile on Sunday. This is the first missile test by Pyongyang since Donald Trump took office as president. Officials said the missile landed in the Sea of Japan.

The missile was fired as Japanese Prime Minister Shinzo Abe visited President Trump in the United States on Saturday.

4. Justin Trudeau to meet with President Trump on Monday in Washington

Prime Minister Justin Trudeau will meet with President Donald Trump at the White House in Washington, DC on Monday, February 13, the Prime Minister’s Office has confirmed with Daily Hive.

An email from the PMO to the Parliamentary Press Gallery said that the nation’s leaders “look forward to discussing the unique relationship between Canada and the United States of America and how we can continue to work hard for middle class Canadians and Americans, together.”

A release on Thursday from the White House said that Trump and Trudeau “look forward to a constructive conversation on strengthening the relationship.”

More than a dozen fans killed in stampede at Angolan football match https://t.co/NmPCMnODpQ

At least 17 people died in a stampede at an Angolan soccer game on Friday, after crowds of fans stormed the stadium gate. The fans pushed against a barrier in order to get into the game after they were unable to enter through the main gate. The barrier fell and the crowd trampled over one another. Officials say 76 people were also injured.

6. Canada is the fastest growing country among G7 nations

Canada’s population is on the rise.

According to population data from the 2016 Census, Canada has seen its population increase by 1.7 million people (or 5%) in the last five years – just slightly lower than the 5.9% population growth recorded between 2006 and 2011.

Internationally, this ranks Canada as the fastest growing country among G7 nations. Per the newly released data, Canada’s population growth can be attributed mainly to a migratory increase (the difference between the number of immigrants and emigrants) with newcomers to Canada representing about two-thirds of the population growth.

7. Over £50 million million worth of cocaine washes up on two UK beaches

Cocaine worth £50m washes up on British beaches https://t.co/k9VMyIi3jl

Over £50 million (CAD$81 million) worth of cocaine was found washed up on two beaches in Norfolk, England. A passerby discovered 793lb of cocaine contained in several duffle bags.

“We are now working with Border Force, the Coastguard Agency and Norfolk Police to try and establish how the bags ended up where they did, however, it is extremely unlikely that this was their intended destination,” said Matthew Rivers of the UK’s National Crime Agency.

Hawaii’s Kilauea Volcano is spewing a stream of “fire hose” lava into the Pacific Ocean. The lava stream began in January when the Kamokuna lava delta fell into the sea. When the lava comes in contact with the ocean, it results in an explosive reaction. The US Geological Survey has warned visitors to keep their distance from the site.

9. Earthquakes kill at least six, injures dozens in the Philippines

A 6.7 magnitude earthquake in the southern Philippines killed at least six people and injured over 120 on Friday. The quake occurred in the Surigao del Norte province and hundreds of people were forced to evacuate from their homes. Officials say over 100 aftershocks have been felt.