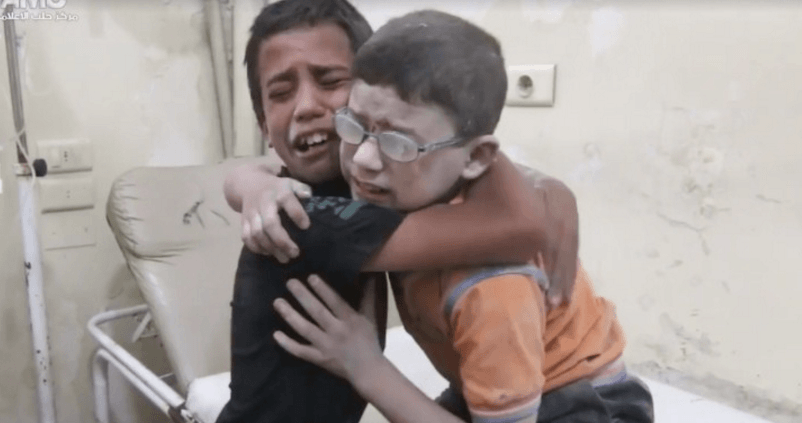 A heartbreaking video showing two young boys  sobbing after their home was attacked by an airstrike that killed their brother in Aleppo, Syria, is gaining international attention. The boys are seen weeping on a hospital bed shouting “the heartache— my brother is gone.” The video has been viewed over 700,000 times.

A woman from the Czech Republic was found alive after surviving in New Zealand’s frozen wilderness for one month. Rescue authorities found her alive in Routeburn Track and she is recovering in hospital. Her partner fell to his death during the hike. The 32-kilometre track usually only takes three days to hike, but the couple lost their way because track markers were covered by the snow.

Fifteen animals were freed from the “world’s worst zoo” in Khan Younis, Gaza. Animal rights group, Four Paws International, rescued the animals from the zoo and will bring them to another zoo in Jordan. The zoo also displayed stuffed animals that were once alive. “The conditions the animals were under were very far from ideal,” said Amir Khalil of Four Paws.

Thirteen people are dead after militants attacked the American University of Afghanistan on August 24. The militants set off a large explosion and began gunfire. According to Kabul police chief Abdul Rahman Rahimi, seven students, three police officers, and two security guards were killed in the attack.The militants were shot dead by police.

5. 54 dead after bomb explodes near wedding party in Turkey

A bomb exploded near an outdoor wedding in Gaziantep, Turkey, on August 28, killing at least 54 people and injuring 94. At first, Turkish Recep Tayyip Erdogan said that a young child suicide bomber linked to ISIS was responsible for the attack. However, Prime Minister Binali Yildirim later said it was not clear who the bomber was.

A powerful magnitude 6.2 earthquake left 290 people dead in Italy’s central region on Wednesday. The epicentre was near the towns of Accumoli and Arquata del Tronto. On Saturday, the country held a national day of mourning and a mass funeral took place for the victims in Arquata.

France’s highest court overturned a controversial burkini ban in the country’s beach resort towns. The ruling means that towns are no longer allowed to place a ban on the full-body swimsuits that are worn my some Muslim women to maintain modesty. However, about 30 mayors of French coastal towns are refusing to lift the ban.

A year-long NASA Mars simulation experience has ended for six researchers who have been inside an isolation dome in Mauna Loa, Hawaii. While living in the dome, the researchers were allowed to go outside wearing spacesuits and they were forced to communicate with the outside world using a 20-minute minute delay (which simulates how communication on Mars would take place). The researchers will celebrate the end of the project with a feast and a swim in the ocean.

Over 40 people in Singapore have been infected locally by the Zika virus. The first outbreak of Zika in Singapore was documented in May and was imported by a man returning from Brazil. The country’s Ministry of Health confirmed there are 41 locally transmitted cases of the virus but authorities say most of those infected have recovered, while seven people remain in hospital.