Fifteen-year-old Trevor Sullivan was diagnosed with a heart condition called cardiomyopathy in March 2015. After several months of waiting, the Michigan teen finally received a heart transplant in November. While waking up from his surgery, Trevor’s mother filmed his emotional response to having a new heart. Last week, Sullivan shared the video with an organ transplant organization called Gift of Life Michigan. The video has gone viral and Sullivan’s reaction to his new heart serves as a beautiful reminder to not take anything in life for granted.

A monkey in Tamil Nadu, India, is making headlines after its unlikely friendship with a stray puppy. The primate has adopted the little dog and the two are inseparable. The monkey takes the puppy everywhere and even feeds it. The pair have become a hit in India and globally as pictures of the adorable friends have been shared on Facebook over 100,000 times.

3. Cop plays basketball with neighbourhood kids and surprises them with a visit from Shaquille O’Neal

When Gainesville, Florida, police officer Bobby White received a dispatch call about a group of noisy kids playing basketball on the street, he didn’t want to punish them. White had no issue with the kids playing ball and he actually ended up joining in on a game of pick up with them. The heartwarming moment was all caught White’s police car dash cam. That video was shared by the Gainesville Police Department and former NBA star Shaquille O’Neal was one of the many who ended up watching it online. Shaq was inspired by White’s kindness and decided he wanted to join in on a game too. Watch White return to the same neighbourhood and surprise the kids with O’Neal.

A very cute sloth found desperately clinging to a motorway crash barrier has been saved and returned to the wild. How the animal made it all the way to a busy street in Quevedo, Ecuador, is a mystery, but the little guy found himself to be in quite a conundrum. Traffic officials were able to save the sloth and bring it to a vet, before it was freed back into the wild. A picture of the animal, appearing to smile at the camera during the rescue, has gone viral.

5. Bride doesn’t let blizzard get in the way of her special day, takes subway to reception 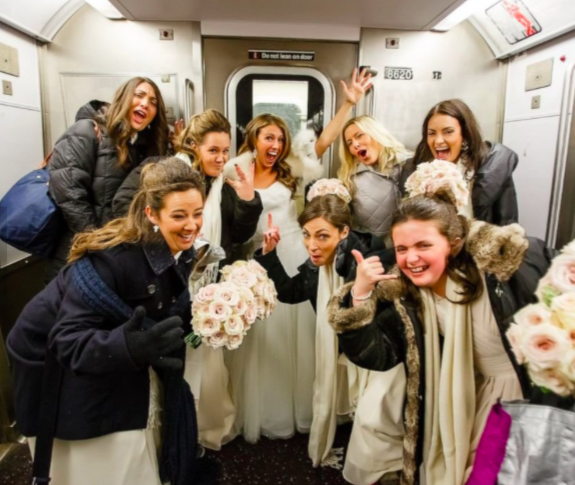 Ashley Burlage wasn’t going to let a blizzard get in the way of her wedding day. The New York City bride wasn’t phased by the huge pileup of snow on the streets. Instead, she gathered her bridesmaids and about 40 guests into a subway car and they were off to the wedding, making it just in time.

6. Hermit donates inheritance to community that helped her

The Serbian hermit who gave away her inheritance fortune https://t.co/KYYjS1ajiM pic.twitter.com/LiHh2IrTZU

Marija Zlatic has lived as a hermit in Serbia for most of her life. A few years ago, 86-year-old Zlatic found out that her estranged husband, who lived in Australia, had passed away. He left her with an inheritance of $992,849 but instead of keeping it she decided to give it all away to the community that takes care of her. Zlatic’s neighbours help her chop wood for fire and assist her with other chores. She believes they are more deserving of the money. “Where I am going soon I do not need money, so I gave it away. They need it more,” she told Serbian website B92.

This piglet was saved by a family just before it froze to death during the blizzard https://t.co/RpQcfHzwgS pic.twitter.com/T2EpF47re9

Perry Smith was driving his family home after a day spent skiing when he saw something struggling to move on the side of the road. Smith pulled over and his son, also named Perry, saw a small pig stuck in the snow. Smith grabbed a sweater and wrapped it around the pig. The family took the animal back to the hotel where they were staying and spent all night nursing it back to health. The kids named their new friend Wee Wee. As the story of Wee Wee’s rescue has spread on social media, Smith has been asked what he will do with the pig. Luckily, he has been able to find Wee Wee a safe new home at an animal shelter in Maryland, close to where the family lives.

A beautiful and emotional video of a traditional Maori wedding dance has gone viral. Aaliyah and Benjamin Armstrong shared the special moment that took place at their wedding reception in Aukland last week. The haka is a traditional Maori war cry that uses body slapping and intense facial expressions, and is also preformed at special celebrations, such as weddings, to welcome new guests. The special dance caught Aaliyah and Benjamin by surprise as the groomsmen wedding party suddenly began to preform. The couple decided to join in too, but not before Aaliyah was moved to tears.

A cow that escaped from a slaughterhouse in Queens, New York, is now happily living at an animal sanctuary. The cow dodged through busy streets and traffic but was later captured by the police. The Skylands Animal Sanctuary & Rescue in Wantage, New Jersey, later took the animal in. The owner of the sanctuary, Mike Stura, has named the cow ‘Freddie’ and told The New York Times that the animal will now live “a life of leisure” with its new “cow friends.”