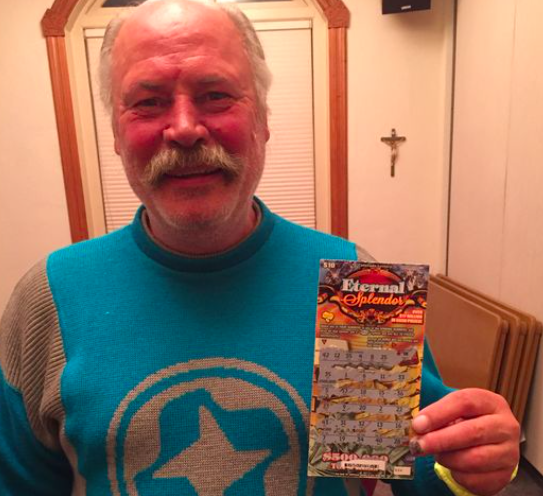 Michael Engfors is celebrating Christmas early. The 60-year-old Colorado man has been homeless for the the past several years after losing his business and struggling with alcoholism. Last Friday, he bought a scratch lottery ticket and ended up winning $500,000. “Michael never gave up. He knew that if he kept pushing on, eventually his luck would change,” said Jeremy Kowalis, a representative from the Aspen Homeless Shelter, where Engfors has been staying.

Mariangela Banchero is very thankful for her quick thinking cats that came to her rescue. The 84-year-old senior has a knee condition and was sleeping in her home when a fire suddenly started. Banchero was in a deep sleep and did not wake up. So her three cats started to meow and jumped on her to alert her. Thankfully, she awoke and was able to escape her home with her beloved cats in tow.

A group of strangers in Saskatoon, Saskatchewan, gathered to help organize a surprise wedding for a young Syrian refugee couple who had to flee their home 10 days after they were married because of bombings. Mohamad Al-Noury and Athar Farroukh spent time in a refugee camp in Lebanon before they came to Saskatoon. A CBC News reporter named Eman Bare met the couple while conducting research for another story. Farroukh told Bare about her journey to Canada and mentioned that she was not able to get wedding pictures taken back home in Syria because she and her husband had to leave.

Bare then wrote a post on Facebook that mentioned how the couple did not have a proper wedding. Strangers saw the post and wanted to help. One woman donated a wedding dress and a suit for the couple. Someone else made them a beautiful wedding cake, and a local organization donated a hall for a reception. Bare led the couple to the surprise reception and they were amazed. “We’re blessed that we’re in Saskatoon and we’ve seen a lot of great things and met a lot of great people and it’s a dream come true for us,” Farroukh told the CBC.

Scott Lee Stevens just wanted to come home for the holidays. The Naval engineer has been away on duty for months and was able to make it back to his family before Christmas. His wife, Ruth, decided not to tell the kids. Instead, she wrapped Scott up and put him under a tree. She called the kids downstairs and told them “an elf” brought them an early Christmas surprise. Alfie and Lily unwrapped the huge gift to find their father inside. The moment was shared on Facebook where it has since gone viral. 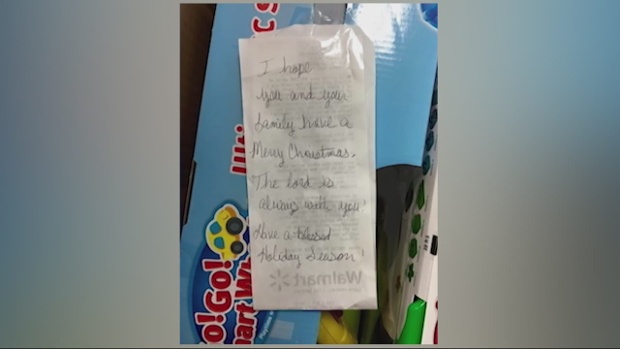 Robin Ayers and her husband were Christmas shopping for their children at a New Hampshire Walmart. Robin was standing in line to pay for the gifts and mentioned to her husband how thankful she was that the gifts could be purchased through layaway. When Robin came back the following week to make the rest of the payment, she found out that a stranger had paid for the majority of the total. When she brought the gifts home she found a note in the bag that read, “I hope you and your family have a Merry Christmas. The lord is always with you. Have a blessed holiday season!”

“[The stranger] paid $150 on our children’s gifts, and it was huge, and I cried right there. I was just so excited and happy that my boys can get a good Christmas,” Ayers told WCVB.

A picture of a cop and an elderly widow spotted shopping together in DeSoto, Texas, has gone viral. Officer John Holder met 73-year-old Dorothy Shepard when he was sent on a well-visit to check up on seniors. They bonded quickly and Holder has kept in touch with Shepard, taking her to appointments and helping her run errands. Holder was helping Shepard shop for her Thanksgiving meal when another customer spotted the pair and posted a photo on the Desoto Police Department Facebook page. Holder never wanted to be in the spotlight for his kind actions but Shepard is happy that her police officer friend is getting the attention he deserves. “I know police officers but I never expected them to be that kind and go out of their way. He is just tremendous,” Shepard told USA Today.

Three-year-old Mali Pheonix Williams-Codt was excited to visit Santa at a U.K. mall. Mali has a hard time using speech and she prefers to sign. Luckily, Santa knew how to sign as well. Watch the heartwarming video of Mali and Santa communicating with sign language. Hopefully she gets the doll and scooter she asks for!

8. Mall Santa bonds with kids who have autism

A picture and visit with a mall Santa is a tradition for many kids. But for children with autism, the loud, overcrowded mall can be an overwhelming place. Thankfully some kids, like six-year-old Brayden, are getting a different experience this holiday season thanks to the Caring Santa Program organized by Autism Speaks. Brayden was a little nervous visiting Santa at a mall in Charlotte, North Carolina. But Santa made him feel welcome and brought out a snow globe and started playing with Brayden on the floor. “He got down on his stomach and just started playing with him,” said Brayden’s mother, Erin Deely. “They didn’t event talk to each other, really, they just bonded and played, and Brayden started to be really excited and started looking at him and smiling.”

Holiday shopping can be extremely stressful, but one greeter at a Walmart in Brampton, Ontario, is trying to change that. David Frances has worked at the store for six years but he has a way of making customers smile. He cracks jokes and also sings to shoppers. Check out the video of Frances in work mode. He definitely loves his job, and customers love him.