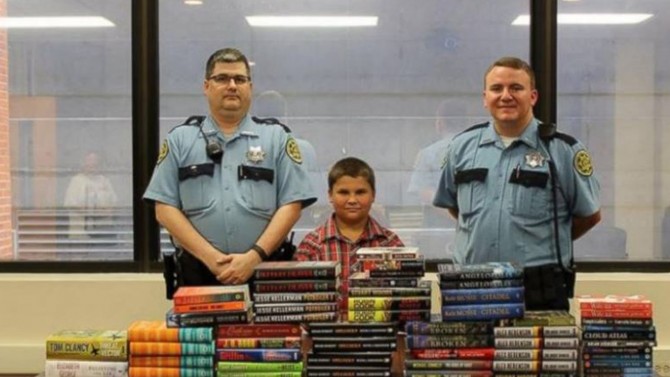 1. Senior fixes hundreds of bikes for kids in need

Burnaby senior refurbishes hundreds of bikes for children in needhttps://t.co/1X58hshVvrpic.twitter.com/FxV93M79kn

Retiree Denis Baker keeps busy for a good cause. The 78-year-old man from Burnaby, BC spends his time fixing up old bikes and donates them to the Lower Mainland Christmas Bureau for kids in need. Baker says he enjoys giving back to the community.“I’ll tell you what I think of — a kid who doesn’t have a lot, coming down on Christmas morning and finding a nice bicycle under the tree,” he told CBC.

Honest #Boston cab driver finds $187,000 in backseat and turns it in to @bostonpolice https://t.co/qWSK3LApjj

A Boston cab driver is being praised for his honesty. The driver dropped off a passenger when he realized that something was left in the back seat. Turns out that something was a backpack filled with $187,000. Without hesitation, the driver brought the bag to the Boston Police headquarters and it was returned to its rightful owner.

Orphaned elk shows up at wildfire, nuzzles firefighters (with pictures!) via /r/UpliftingN… https://t.co/3RAjx2YMBYpic.twitter.com/qsy71Fy9dK

An orphaned elk nuzzled up to some firefighters working to put out a wildfire in Washington State. The elk, nicknamed Buttons, is a regular visitor to the area and comforted the firefighters while they were taking a break from taming the blaze.

4. Puppy found after being lost at sea

Puppy lost at sea reunited with family in Southington https://t.co/fIOsppET2f via @FOX61News

Clare Shaw and her family were enjoying a boat trip with their Shiba Inu puppy Ryder on the coast of Connecticut. The day was going great until Ryder somehow slipped off the boat and ended up in the ocean. By the time the family noticed, Ryder was out of sight. They tried to backtrack to see if they could find their pup but they had no luck. Clare returned home heartbroken.

But she decided to give the search one more try. She posted on Facebook to see if anyone had found Ryder. It turns out that someone saw the dog swimming in the ocean and rescued him.“They had found him swimming in the middle of the sound and pulled him into their boat,” Shaw told Fox 61. The family has been reunited with Ryder and are extremely thankful he is back home safe.

Nine-year-old Tyler Fugett wanted to do something special with his allowance money. Instead of buying himself a video game or a toy, he decided to buy books and donate them to the local jail in his city. He bought over 100 volumes at the local bookstore and randomly showed up at the sheriff ‘s office.

“If (the prisoners) read, they don’t have time to think about doing bad things when they come out. Maybe they’ll find one thing in there that would make them click to be better people,” Fugett said.

Seven-year-old Ben Morris has been battling cancer for the past three years. Recently, Morris found out that he was cancer free and his heartwarming reaction was caught on camera by his mom, Casi.

7. Man donates pool to children after seeing photo of them swimming in a truck bed

When Todd Arredondo saw a viral photo of some kids swimming in the back of a pick-up truck because they couldn’t afford a pool, he wanted to help. Arredondo did some research and found the contact information of the children’s parents.

He bought them an inflatable pool and had it delivered to their home. Arredondo even went an extra step and created a non-profit organization called “Pools for Kids” to help other children in need.“Being kind is self-rewarding. I learned to live simply so others can simply live,” he told Inside Edition.

10 years after a land mine blasted her leg, Mosha the elephant received a new prosthetic leg https://t.co/PRt9yGv4tdpic.twitter.com/4ZwPdpi91i

Mosha the elephant is finally able to walk properly again. When she was seven months old, her leg was blown off by a landmine. Now she has finally been fitted with a proper prosthetic leg. Mosha has had prosthetics in the past, but she was in dire need of a new one because her spine was bending. “She was going to die,” said Dr. Therdchai Jivacate, the surgeon who designed the artificial leg. Mosha is doing well and her new leg allows her more movement than ever before.

9. Widow surprised by firefighters on her 100th birthday

Jeanette Carty received an amazing gift for her 100th birthday. When she stepped out of her house on her special day, dozens of firefighters from the Norfolk Fire-Rescue Department in Virgina were outside her door. Carty has a special connection with the department because her late husband worked as a firefighter there for 30 years. The brigade greeted her with applause and flowers. “I was never more surprised in my life,” Carty told TODAY.