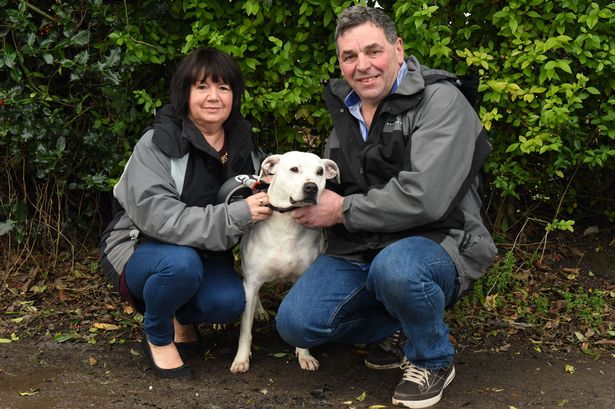 Britain’s loneliest dog has finally found a home. Dotty the Dalmatian-cross has been living in a rescue centre for the past six years and has been rejected by potential owners over 10,000 times. Ed and Janice Darrall heard about the rejected pup after a story was published about Dotty in The Mirror, and they decided to adopt Dotty and give her the loving home she deserves right before Christmas.

2. Man found alive after being trapped more than two days in landslide

Tian Zeming is recovering from a miraculous rescue. After being trapped for more than 60 hours in a landslide that hit an industrial park in southern China on Wednesday, he was found by rescue teams. While seriously injured in the accident, Chinese medical officials say he is stable and recovering well.

A wild otter just visiting at the Monterey Bay Aquarium in California has given birth. Aquarium staff spotted the wild otter hanging around the aquarium’s protection lagoon last week, but no one suspected that she was pregnant. The otter gave birth on Sunday and staff and visitors were pleasantly surprised to find a baby pup cuddling with its mother.

4. Man brings Christmas cheer to Tokyo by running around dressed as Christmas tree

The holidays are always a joyful time of year, but Joseph Tame is taking Christmas cheer to the next level. Tame, originally from the U.K. but now based in Tokyo, decided to make spirits bright this holiday season by running around the streets of Tokyo dressed up as a life-size Christmas tree equipped with tinsel, baubles, and lights. “I like to make people laugh and smile where they don’t expect it,” Tame told CNN.

5. Blind dog rescued after being trapped in well for several weeks

A blind dog named Christmas has finally been rescued after several weeks of being trapped in a well. “The dog had been there for months and they don’t know if he was thrown in, or if he fell in. We’re certainly hoping that he fell, but with the dog being completely blind, he was only kept alive because the local children were kind enough to feed him,” said Laura Simpson of the Harmony Fund in Massachusetts, according to Yahoo. The amazing rescue was caught on camera.

A waiter at a California Applebee’s restaurant is being praised for his honesty. A mother and son were dining at the restaurant and left behind their bag that contained over $32,000 in cash. A waiter, who did not want to be named, found the cash and immediately alerted his boss and the money was returned to the family. The waiter says he was just hoping to do the right thing by making sure the cash got back to its rightful owners.

No one ever suspected that Ronald Read was a millionaire. Read passed away in June and people knew him as a private man who worked as a janitor. But it turns out that the 92-year-old was a skilled investor and had saved about $8 million before his death. In his estate, he donated $4.8 million to the local hospital and $1.2 to the community library. No one in Read’s community expected that he was so wealthy, but his kindness has truly blown people away.

Six-year-old Alex Hovater is doing something most kids wouldn’t even think of. This Christmas, he is giving up all his presents to help the homeless in his California neighbourhood by giving them food and some warm clothes. “I was like, well its getting close to Christmas, and it’s going to be cold outside, so at least give them some snacks and water and a jacket before it freezes up,” said Alex, according to WGME.

9. Kids choose to give presents to their parents instead of keeping presents for themselves

This holiday season, the Boys & Girls Clubs of Metro Atlanta filmed a video that gave underprivileged kids the choice between keeping presents for themselves or giving a present to their parents. Every child in the video decides to give a gift to their mom or dad. This may be the most heartwarming thing you have seen all day.