After Benny the shelter dog was adopted, he could not contain his emotions. The eight-month-old pit bull mix was living at the Carson Animal Care Shelter for several months and finally was adopted by a loving family. Watch Benny’s emotional reaction.

Nubaid Haroon wanted to do something that would pass on cheer to the less fortunate this Christmas. So, he decided to deliver gifts he bought to the homeless living on the streets of London. Haroon says he also wanted to challenge the public’s negative perception of Muslims by showing the true meaning of his faith about giving and caring for others.

“I think that a lot of people think because Muslims don’t celebrate Christmas that we don’t accept it when people celebrate Christmas. But in reality my family give chocolates and food to neighbours/friends regardless of their race/religion. It’s just about being one with the community,” Haroon said in a statement to Takepart.

Local Dog Fulfills Bucket List: Many pet owners include their animals in their holiday celebrations, but one l… https://t.co/fKQmE5TtTh

Todd Burchanowski’s beloved dog Reyes was diagnosed with terminal lymphoma three weeks ago. Burchanowski knew he wanted to make Reyes’ last weeks special, so he created a bucket list for his dog. Reyes has spent her final days travelling to Niagara Falls, eating McDonald’s, building a snowman, and getting married. So far, Reyes has completed 30 things off of her bucket list and will continue to complete her dream doggy activities.

“We went to Niagara Falls, we left the country real briefly, we were able to go swimming… she has never been swimming. When she was first diagnosed I was heartbroken, I’m still heartbroken but this has allowed us to do some things that we never  would have had an opportunity to do,” Burchanowski said.

4. Investor who kicked homeless man off property later offers him a job

An investor who kicked a homeless man felt awful about doing so and decided to help the man out by offering a job. James Eppler has been homeless for several years and has been sleeping on the porch of a home that was recently purchased by the investor named Chris Crever.

When Crever saw that Eppler had set up camp on the back porch, he told Eppler that he would have to leave. Eppler understood that he was now on someone’s property and respectfully left, but Crever felt like he could have been kinder to Eppler. So, he chased after Eppler and told him he was going to hire him as an employee to help clean up the property. “I just saw him as a person I think who really wanted help. It makes me feel good, but it’s not about me. It’s about providing an opportunity for James,” Crever said.

5. Stranger offers private jet to help baby with cancer get to hospital

Eight-month-old baby Jett will be receiving the emergency cancer treatment he desperately needs thanks to the help of an extremely kind stranger. Jett suffers from a rare for of Leukaemia and recently stopped responding to the treatment he is receiving at a hospital in his home state of Louisiana. The only treatment that may help Jett is offered at a hospital located 1,000 miles away in Baltimore.

Unfortunately, his immune system is too weak for him to travel on public flights and the drive to Baltimore would take Jett’s parents nearly 16 hours. But a wealthy stranger named James Davidson heard about Jett’s story and offered his private aircraft to help get the baby and his family get to Baltimore. Jett’s parents, Brittany and Tyler Self, are extremely grateful to Davidson for offering to help their son. “Its a blessing,” said Tyler, according to KLFY News.

For those who may have wondered if there’s any good left in the world, just turn to Chicago woman LaToya Ellis as… https://t.co/CRwGj7XeNx

Latoya Ellis and her three children received a Christmas miracle. Ellis lost her job and was evicted from her Chicago apartment in August because she could no longer afford rent. A local news station reported on Ellis’ story in November and many viewers wanted to help the single mother and her family. But one anonymous donor’s gift has left Ellis utterly shocked. The donor has offered to pay for a year’s worth of rent so Ellis and her children can finally have a place to call home. Ellis says the amazing act of kindness has inspired her to pay it forward. “I’m going to continue advocating, I’m going to continue volunteering — it’s not just about my family,” she said. 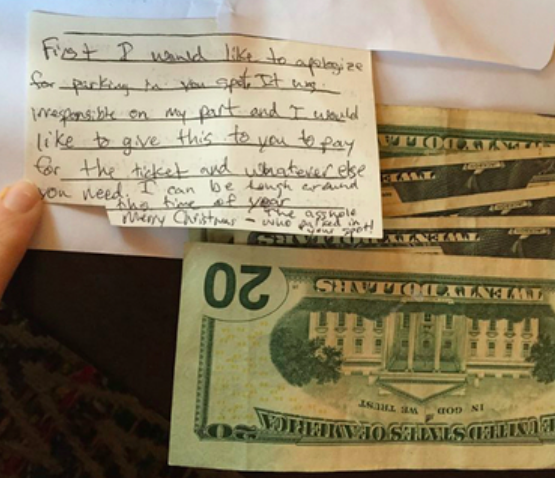 After accidentally parking in someone’s paid parking spot, this person received a note from the spot’s stressed out owner that read:

Because you were parked in my spot last night (and still are??), I got a ticket for street parking overnight w/out a permit. I’m broke. These are privately owned spots, and I could have you ticketed + towed. I won’t, but please don’t park in my spot again.

The recipient of this note could have not cared that they parked in the wrong spot, but instead they wrote back this extremely kind response:

First I would like to apologize for parking in you[r] spot. It was irresponsible on my part and I would like to give this to you to pay for the ticket and whatever else you need. I[t] can be tough around this time of year. Merry Christmas – the a**hole who parked in your spot.

An image of the note was posted on Imgur showing an undisclosed amount of money contained next to the envelope to help pay for the ticket.

Police Sgt. Burrel “Chip” Davis received a life-saving late Christmas present from his co-worker Officer Eric Crowder. Davis was in dire need of a new kidney and Crowder wanted to help save his friend’s life by seeing if his kidney would be a match for a transplant. Crowder’s kidney was a perfect match and the transplant surgery was successfully preformed on Tuesday. Crowder and Davis young daughter’s are also very close friends and Crowder says he didn’t want to see Davis’ kids grow up without a father. “Words can’t express how thankful I am to him for stepping up,” said Sgt. Davis, according to KFLY News. 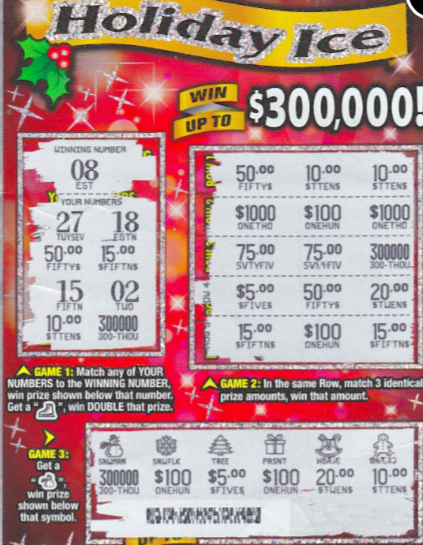 Imagine how happy your dad would be if you gave him $300,000 for Christmas? Well that’s what one Michigan man’s kids did, but not on purpose. The kids purchased a scratch lottery ticket for their dad as a Christmas stocking stuffer. He scratched it and won the $300,000 prize. In a press release, the anonymous winner said he will use the money to take his family somewhere nice for spring break, to say thanks for the surprise gift.