Charlotte Heffelmire is being credited as a hero with superhuman strength. The teenager from Virginia sprung into action and managed to muster up enough strength to lift a GMC truck off of her father, who became trapped under the vehicle while doing some repairs in the garage. The truck was situated near propane tanks and it instantly caught on fire.

Luckily, Charlotte’s father was able to safely escape with her help. What makes the story even more amazing is that the teen calmly drove the burning truck out of the garage and made sure all of her family members safely evacuated the home. Heffelmire received a citizen lifesaving award from her local fire rescue department in recognition of her courage.

Several Tennessee police officers are being recognized for their kindness after helping a 79-year-old elderly disabled man who hadn’t eaten in two days. The man called 911 to alert authorities that he needed help because he had no groceries. A group of officers arrived at his home with $160 worth of groceries, making sure the man would have enough food to last him a few weeks.

“It’s difficult for us to see as police officers. We’re out here to take care of the public at large and that doesn’t always mean stopping a car. Sometimes it’s us doing little things like this,” explained Mark Billions, one of the officers who helped the elderly man.

Eight-year-old Zurlisa Garcia is battling brain cancer and when times get tough, she has her puppy Frida by her side to comfort her. But when Frida went missing over the weekend, Zurlisa was afraid she would never see her best friend again. Luckily, someone found the dog and contacted the local SPCA in Zurlisa’s neighbourhood and she was quickly reunited with Frida.

A high school student is the only passenger who waits for the train at the Kyu-Shirataki station in Hokkaido, Japan. This is because Japan Railways has kept this remote station open to make sure that Kana Harada can make it to her high school located half an hour away. According to CCTV, Kya-Shirataki station will remain open for Harada until March, when she graduates. Now that’s what you call great transit service.

5. Five-year-old boy saves father from heart attack by biking in the dark to find help

After tucking him in to bed, five-year-old Kévin-Djéné Godin’s 58-year-old father collapsed on the floor. The little boy jumped on his bike wearing only his pyjamas and traveled in the rain across town to alert his mother who was working a nightshift over eight kilometres away from their home.

A motorist spotted Kévin-Djéné biking down the road and stopped him. Kévin-Djéné explained to the man that he was trying to find his mother so she could come home to help his father. The motorist called 911 and emergency crews were able to reach Kévin-Djéné’s father in time to send him to the hospital where he is now recovering.

When the kiss cam zoomed in on partners Andy Evans and Brad Parr during the hockey game between the Toronto Maple Leafs and L.A. Kings, the two men leaned in for a smooch. The crowd let out a burst of supportive cheers as the men became the first same-sex couple to be featured on an NHL kiss cam. 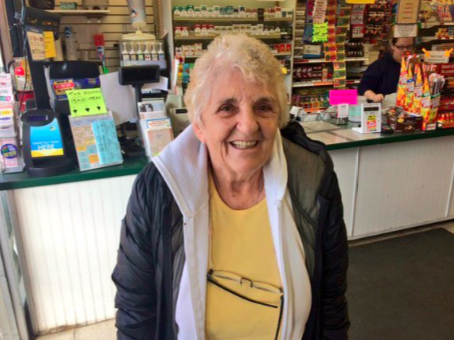 When news broke that someone in the town of Fredonia, New York purchased a $1,000,000 winning lottery ticket at the Fredonia Food Market, residents were eager to find out if they had hit the jackpot. The local news station was filming a segment about the lottery madness at the market when 81-year-old Amy McGavis walked into the shop to check her ticket. When the clerk told her that she was the winner, her reaction was caught on camera. McGavis was completely shocked. The grandmother has 20 grandchildren and 31 great grandchildren. She plans on sharing the winnings with her family.

8. Former criminal helps give back to community

KLFY: Former criminal hopes to clean up his record by helping others: PROVIDENCE, RI (WPRI) – Jay Cook is only… https://t.co/mJXbp06Jeg

Jay Cook is ready to make a positive change in his life and for others. The 41-year-old has done jail time on and off since he was 18, and after what he hopes to be his final time behind bars, Cook is prepared to give back to his community in Rhode Island. He received a $1,000 lawsuit cheque from the State and is using the money to prepare meals for local military veterans and the homeless.

“I did the crimes. I paid the price for it. I’m just trying not to go back. I broke into people’s houses. I’ve stolen vehicles. I’ve done everything. This is my best possible way to stay straight,” Cook told KFLY News.

9. Good Samaritan gives homeless man shirt off his back

Joey Resto was riding on the New York subway train when a homeless man got on with no shirt. It was a very cold day and Resto approached the man and gave him his very own shirt and his toque. “He looked so weak and frail. I had to help him, or he would not put it on,” Resto told ABC. Another passenger filmed the interaction and the heartwarming moment has gone viral.