1. High school student accepted into 149 colleges and wins over $7 million in scholarships 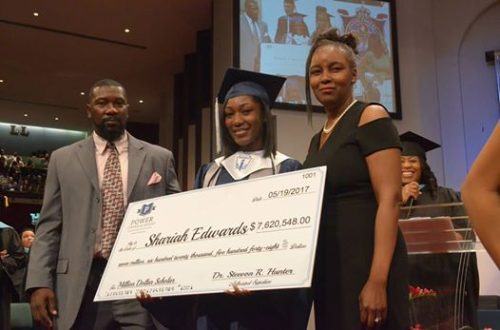 Shariah Edwards recently graduated from Power Center Academy High School and now she must decide what college to attend. What makes Edwards’ decision particularly touch is that she must choose between the 149 colleges that accepted her. She was also offered over $7.6 million in scholarships. She’s one smart cookie.

Only in Canada would we hear of such fun between cops and kids.

Edmonton’s Const. Brendan Fonteyne and his partner Const. Cameron Jones were patrolling a neighbourhood in the city when they came across some kids.

Fonteyne posted a video of the encounter on twitter showing what happened right after he encouraged the kids to ambush his partner.

After this, there is no turning back Canada. Fonteyne definitely took the red pill… and we couldn’t be more proud.

This dachshund loves to smile and it’s the cutest thing ever. We’ll pretty sure his adorable little face will make your day.

Four-year-old Sidney Fahrenbruch was terrified of monsters under her bed. She decided to call up her local police station in Colorado to see if any officers could come check her home. Officer David Bonday arrived at the Fahrenbruch home to make sure everything was safe and sound.

RCMP in Williams Lake BC got a special surprise this week while conducting a police check in an area that had been evacuated due to the BC wildfires.

While doing a check in the evacuated zone near Mountain House Road and Hwy 97 North on July 31, a black and white dog emerged from an area that had been destroyed by the fire.

The lone pooch was taken back to the RCMP command post, where she was given food (from items donated earlier), water, and a makeshift bed.

“We think she might be a border collie cross,” said Williams Lake RCMP Cpl. Jesse O’Donaghey. “She’s very mild-mannered and easy going, and has been a good morale boost for our police officers, working long shifts.”

Williams Lake RCMP turned the over the dog to the local detachment of the SPCA with the hopes she will soon be reunited with her owner.

6. These dogs are frightened by this toy and it’s very cute

These white, fluffy pooches don’t know what to think of this wind-up toy and their reactions are totally hilarious.

The sea otter pup rescued after it was found crying off Vancouver Island, BC, in June is the star of his own baby otter cam after moving to the nursery at Vancouver Aquarium.

The male pup, named Hardy, was between two and four weeks old when he was spotted by boaters, after it began following their boat while crying out.

Now two months old, Hardy has been getting round-the-clock care from volunteers and staff, recently starting to explore underwater and learning to dive.

If you need a bit more sea otter pup in your life – and who doesn’t??? – then you can tune into the live feed from Hardy’s nursery here: vanaqua.org/babyottercam.

8. This 9-year-old singing Whitney Houston is the uplifting video you need to see

Nine-year-old Dane Miller loves Whitney Houston and this video of him belting out “I Have Nothing” has gone viral in just a week with over 23 million views.

Miller’s mom says he’s always been a passionate singer. This kid’s got talent!

Now, this is what you call a truly Canadian moment.

A tourist visiting Waterton Lakes Alberta captured a video of a Mountie in red serge chasing away a black bear from the park.

The clip looks like it came right out of a Canadian Heritage Minute.

“Caught this video of an RCMP in red serge chasing a black bear out of the Waterton Lakes National Park townsite,” writes Damien G. on YouTube. “Nothing more Canadian than an RCMP office in red serge and a black bear. Truly Canadian image to celebrate Canada 150.”

And we agree, eh.