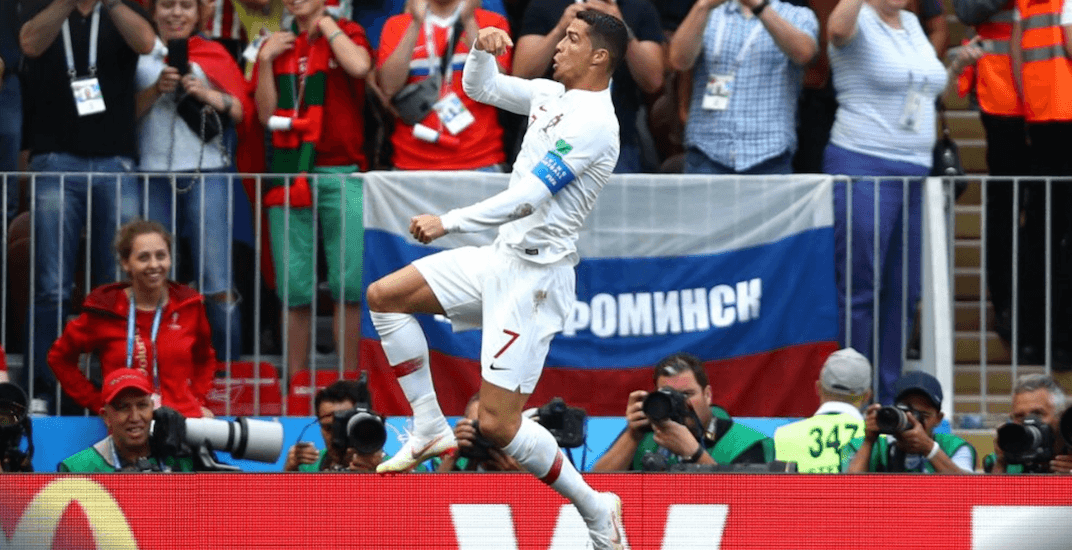 Where would Portugal be without Cristiano Ronaldo?

The 33-year-old global icon scored another famous goal Wednesday at the FIFA World Cup, putting his country in a good spot heading into their final game of the group stage.

He has all four of his country’s goals through two matches.

It took just four minutes in Portugal’s second match for Ronaldo to score his fourth goal of Russia 2018. To put that in perspective, consider that only two players at the 2014 World Cup had more.

Ronaldo headed home a cross in the box, giving Portugal the only goal they needed to defeat Morocco.

RONALDO DOES IT AGAIN!!!

CR7 gets his 4th goal of the #WorldCup to give #POR a 1-0 lead! pic.twitter.com/dwsjhOiIXA

With two straight losses to open the tournament, Morocco became the first team to be mathematically eliminated from this year’s World Cup.

Morocco had their chances, but ultimately couldn’t finish the job.

Rui Patrício comes up big for #POR maintain their 1-0 lead over #MAR with super save. #WorldCup pic.twitter.com/d5RYoEnIah

GOLDEN OPPORTUNITY WASTED!#MAR miss the perfect chance to level the score against #POR with a baffling miss #WorldCup pic.twitter.com/rN9ooMYis0

Portugal will have a chance to win the group on Monday. Hopefully Pepe will have recovered from this vicious attack by then:

The other Group B powerhouse, Spain kept pace with their European neighbours on Wednesday, defeating Iran 1-0.

Diego Costa scored a lucky goal in the 54th minute, getting a favourable bounce off a defender’s leg.

After dominating possession, Diego Costa puts #ESP ahead with a clumsy but effective goal #WorldCup pic.twitter.com/7DkxezUXme

NO GOAL!😨😨😨#IRN is denied the game-tying goal after VAR determines they were offside! pic.twitter.com/1EZd86L5CW

The goal was allowed on the pitch, but after further review from the Video Assisted Referee, it was deemed to be offside. Say what you want about VAR, but it was made for moments like these.

Though their win came by the slimmest of margins, Spain dominated the match, controlling 70% of possession and outshooting their opponent 17-5.

Iran didn’t score, but they did do this…

Honestly what just happened at the end of the game there hahahahaha, last 20 seconds, 1-0 down in a crucial group game in the World Cup, what the hell is he doing? 😂 #IRN #WorldCup pic.twitter.com/YfYeTeeLsj

Iran will likely need to beat Portugal in their final group stage match to move on to the Round of 16.

Saudi Arabia’s goalkeeper misjudged his jump for a corner kick and Luis Suarez was Johnny on the spot for the only goal of the match in the 23rd minute.

SUAREZ SCORES!!#URU takes the lead, as Suarez scores his first goal of the #WorldCup pic.twitter.com/2IIiQLH4dV

The win puts Uruguay in a first-place tie with Russia atop Group A. Both Saudi Arabia and Egypt, two countries searching for their first positive result, have been eliminated from the next round.

And so, Group A after two rounds of fixtures…

Denmark and France will look to improve their perfect 1-0 records with matches against Australia and Peru, respectively, in Group C action on Thursday. The final game of the day includes Lionel Messi and Argentina looking to avoid going winless through their first two matches, as they play Croatia.