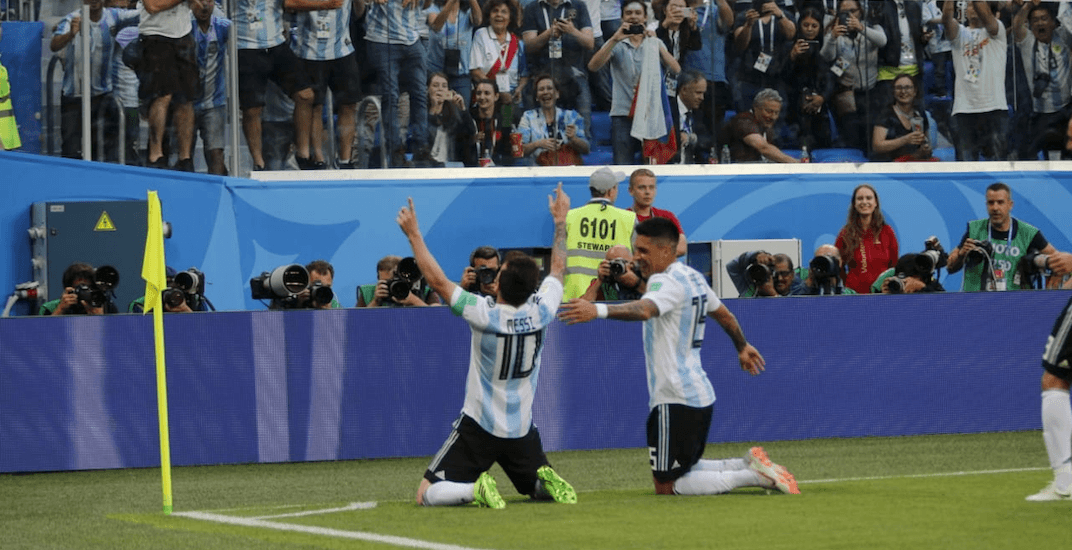 Argentina, your prayers have been answered.

The global soccer power came dangerously close to being eliminated early at the World Cup on Tuesday, needing a late goal to snatch victory and break Nigerian hearts.

Needing a win to advance, it was panic time for Argentina with the score tied late in the match.

That’s when Marcos Rojo saved the day, scoring the goal Argentina needed for a 2-1 win in the 86th minute.

#ARG GETS THEIR MIRACLE!😲😲😲

ROJO SCORES TO PUT ARGENTINA IN THE LEAD! Up 2-1 on #NRG #WorldCup pic.twitter.com/UzabZRZXTm

It was a heartbreaking result for Nigeria, who needed just a draw to advance.

Lionel Messi opened the scoring for Argentina, getting his first of the tournament in the 14th minute. With the goal, he became the first player to score at the World Cup as a teenager, in his 20s, and in his 30s.

…much to the delight of Diego Maradona.

The story of the game was supposed to be Messi but Maradona finds a way to upstage him. Best part about that picture? The guy holding him. Hilarious. pic.twitter.com/UOqL9xetvf

More VAR controversy reigned in the second half, leading to the tying goal after a penalty was awarded to Nigeria.

The foul called on Mascherano that led to the penalty shot and #NGA evening the score. Thoughts?#WorldCup pic.twitter.com/tDTqHvt2tM

Argentina came dangerously close to conceding another penalty, as VAR was consulted for a potential hand-ball.

NO PENALTY!❌#ARG nearly has a penalty called on them, but VAR determines that there was no hand-ball #WorldCup pic.twitter.com/PKhqWUfFJc

Did everyone also see that or was that just me? #NGAARG #ARG pic.twitter.com/fwDxG7d7hm

Croatia continued its great run at the World Cup, defeating Iceland 2-1 for its third-straight victory.

As the smallest country to ever qualify for a World Cup, you have to admire Iceland’s resilience. It took until the 90th minute for Croatia to score the winner – courtesy of Ivan Perisic.

Here’s how the other two goals were scored:

Milan Badelj shot had no chance of being stopped. #CRO leads 1-0 and Iceland's hopes of advancing are fading fast.#WorldCup pic.twitter.com/RmOBS8Xol3

A hand ball in the box leads to #ISL scoring from the spot to tie the game.#WorldCup pic.twitter.com/TBg5yNKd10

Tears of joy for Peru, despite going home

Having lost each of their first two matches, Peru was already eliminated from the knockout round before their final match against Australia.

You wouldn’t know it by the way Peru played, or the emotional reaction from their fans in the stands. Tears of joy flowed from Peruvian spectators, as their team beat Australia 2-0 – their first win at the FIFA World Cup since 1978.

Peru fan in tears following Peru's 1st goal in the 2018 #worldcup You gotta give it to the wizards behind those cameras for capturing such wonder. #AusPer pic.twitter.com/UBnjOO1Snt

Andre Carrillo and Paolo Guerrero scored the goals for Peru, scoring in the 18th and 50th minutes.

André Carrillo scores #PER's first #WorldCup goal since 1982 and it was sensational! pic.twitter.com/Lrl7PfXp2x

Captain Paolo Guerrero scores to make it 2-0 #PER and sink #AUS's hopes of advancing.#WorldCup pic.twitter.com/2EbQhrOnk3

The loss was a deathblow to Australia’s chances of advancing. The Aussies needed a win coupled with a Denmark loss to France in order to move on.

No goals for France, Denmark

Both France and Denmark needed only a draw to advance past the group stage, so it should come as no surprise that they finished their match in a 0-0 tie.

Highlights of the #DEN vs #FRA match.#WorldCuppic.twitter.com/QRzRjCmYPZ

France had 11 attempts at goal, Denmark had just five. The draw secured first place for France, while Denmark takes second.

As the winners of Group C, France will take on Group D runner-up Argentina for a tantalizing matchup in the Round of 16. Croatia will face Denmark.

No team in Group F is guaranteed a spot in the knockout round yet, so there could be nervous moments for Germany, Mexico, and Sweden on Tuesday. The same applies in Group E, concerning Brazil, Serbia, and Switzerland. Vancouver Whitecaps FC captain Kendall Waston is expected to start for Costa Rica, in his first action of the tournament.