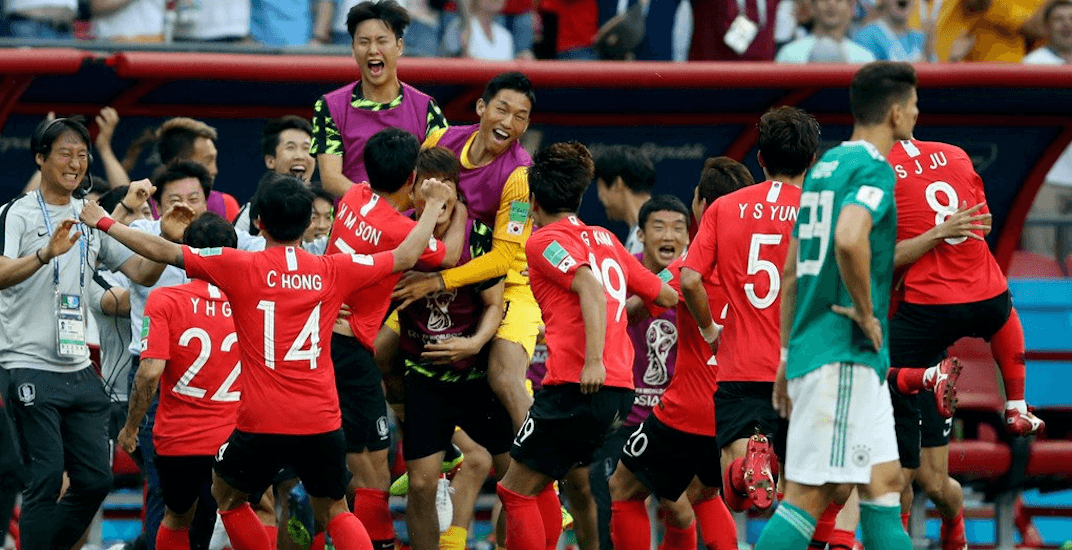 Just when you think this World Cup couldn’t get any more dramatic and unpredictable, this happens.

Not only is Germany going home, they’ve finished last in their group.

A win against South Korea would have put Germany through. A draw would have eliminated them.

And a loss… well, a loss was unthinkable.

Germany had everything to play for, but couldn’t beat Korean goalkeeper Jo Hyeonwoo, who played the match of his life. They eventually lost 2-0, giving Korea the biggest upset in a tournament of upsets.

The defending champions dominated this match, directing 26 shots at goal – compared to just 11 attempts by Korea. They also controlled possession, holding the ball 70% of the time.

Yet, it was Korea that opened the scoring in stoppage time, courtesy of Kim Young-gwon. The goal was initially called offside, but VAR overturned the call.

The goal that ELIMINATED #GER from the #WorldCup pic.twitter.com/3b7iWv0eSA

This was the reaction in Germany:

Fans in Berlin react to Germany crashing out of the World Cup at the group stage for the first time since 1938 https://t.co/mLhFcF00qu pic.twitter.com/ARlxdI28pn

This was the reaction in Mexico:

When you go to the next round because of #KOR 😆 #MEX #Mexico #NadaNosDetiene #Germany #Alemania #WorldCup pic.twitter.com/MtTwyptGYU

Sweden grabs first in the group

Mexico thought their World Cup was over.

After looking so good in their first two matches, beating Germany and South Korea, Mexico faced the prospect of a three-way tie if they lost to Sweden.

And boy, did they lose.

Three second-half goals gave Sweden a 3-0 lead, which lifts them to first in the group. Mexico didn’t find out until after the match that they’d be going through to the knockout round, given the result between Korea and Germany.

Augustinsson opens the scoring and increases Sweden's chances of advancing to the Round of 16.#WorldCup pic.twitter.com/7uJ6hx7B9q

A foul in the box leads to Andreas Granqvist scoring from the spot to give Sweden a HUGE second goal.#WorldCup pic.twitter.com/3mxKuEKQOG

Edson Álvarez scores on his own. #SWE now leads 3-0 and are closer to a spot in the Round of 16.#WorldCup pic.twitter.com/pw2PyPjNvC

It was after the match that Mexicans watched as Korea shocked Germany. Wonder if they’ll build a statue for the Korean goalkeeper in Mexico City?

Switzerland just needed a draw in their match against Costa Rica to advance, and that’s exactly what they got, as the match ended 2-2.

Blerim Dzemaili scored first to put the Swiss on top in the 31st minute.

Blerim Džemaili BLASTS it past the keeper to put Switzerland up 1-0 and move them closer to a spot in the Round of 16.#WorldCup pic.twitter.com/x501WX9H9Q

Vancouver Whitecaps FC captain Kendall Waston got Costa Rica on the board early in the second half, heading home a corner to make a bit of history. The goal was not only the first for Costa Rica at Russia 2018, it was the first-ever by a Whitecaps player at a World Cup.

WASTON GETS THE EQUALIZER!!@WhitecapsFC Captain Kendall Waston scores to tie the game for #CRC.#WorldCup pic.twitter.com/Xw8vzpWGzG

Switzerland scored in the 88th minute, but it didn’t stand up as the winner, as a Costa Rica scored again to level the match three minutes into stoppage time.

Josip Drmić may have sent Switzerland through to the Round of 16 on a winning note.#WorldCup pic.twitter.com/6gFGgdyfbd

#CRC earns a draw against #SUI with a penalty shot in stoppage time!#WorldCup pic.twitter.com/PHJ1Q5R5AR

After a draw against Switzerland in their opening match, Brazil’s in a groove again, winning two in a row, including Wednesday’s game against Serbia 2-0.

Paulinho (36′) and Thiago Silva (68′) scored the goals for the Brazilians.

Thiago Silva scores!!!!!#BRA take a 2-0 lead over #SRB on a header from the corner #WorldCup pic.twitter.com/lRujqXAvW2

The win secured Brazil’s spot atop Group E, with Switzerland joining them in the knockout round. The tournament is over for both Serbia and Costa Rica.

Brazil will take on Mexico in the Round of 16, while Switzerland faces Sweden.

Japan, Senegal and Colombia all have a chance to advance to the knockout round with a win in Group H, while England and Belgium will decide first-place in Group G. Poland, Panama, and Tunisia will play for pride.