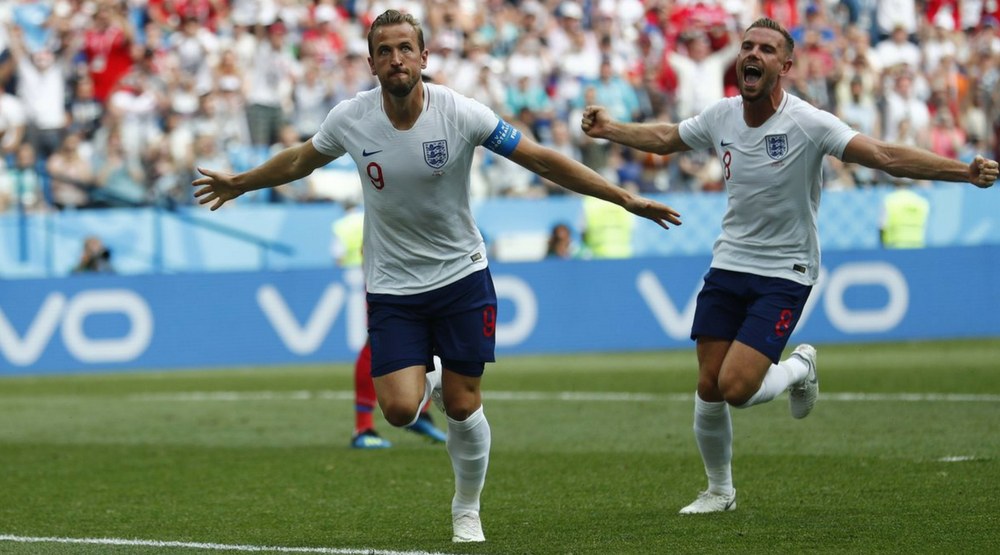 England’s dream to win their first World Cup in more than 50 years lives on.

The Three Lions, who are more famous for World Cup failures than triumphs, have progressed to the Round of 16 after routing Panama 6-1 on Sunday, courtesy of a Harry Kane hat trick.

Here’s a recap of Sunday’s action at the World Cup.

After a less than convincing 2-1 win over Tunisia earlier in the week, England looked like a world soccer power against Panama and are through to the next round of the World Cup.

Defender John Stones opened the scoring in the eighth minute, and England never looked back.

Stones’ goal was the first of five first half goals for England, making it the first time they’ve scored more than four times in a World Cup match since 1966.

Harry Kane was on fire once again, scoring twice in the first half, and completing his hat trick late in the game when he deflected Ruben Loftus-Cheek’s shot past Jaime Penedo in the Panama goal.

What an odd way to complete a hat trick 😕…

Harry Kane gets his 3rd goal of the match on a deflection, #ENG lead 6-0 #WorldCup pic.twitter.com/Whm0ygWQ4E

It was a comfortable win for England, who play their final group stage match against Belgium on Thursday.

While Belgium and England are through to the Knockout Stage of Russia 2018, it’s over and done with for Panama and Tunisia.

It’s all over for Poland

Nobody really expected either Colombia or Poland to lose their opening group matches, but that’s exactly what happened. This resulted in a virtual elimination game when the two teams met, and it couldn’t have gone any worse for Poland.

It was a cagey first half, but Yerry Mina struck just before half time to snap Colombia out of their funk.

Yerry Mina scores for #COL to re-ignite the match & give his team a 1-0 lead! #WorldCup pic.twitter.com/jmnMr3v2pO

Poland never really looked as though they could find a way to score in this one, and Radamel Falcao put the match out Poland’s reach with his 70th minute goal.

GOAL!#COL puts #POL on the brink of elimination as Falcao scores to give them 2-0 lead! #WorldCup pic.twitter.com/g3K77yI3uA

To add insult to injury, by the end of the match the Colombian players were toying with their Polish opponents.

James Rodriguez was just TOYING with #POL at the end of the match 👀 #WorldCup pic.twitter.com/7m2IXlAFst

Colombia’s fate will be decided in a massive showdown against Senegal on Thursday, while Poland will look to thwart Japan’s hopes of progressing to the Round of 16.

Japan and Senegal won their opening games, and it was the perfect backdrop for Sunday’s match between these two nations, as they finished in a 2-2 draw.

Senegal struck first through when Sadio Mane took advantage of sloppy Japanese defending to open the scoring in the 11th minute.

MANE SCORES THE OPENING GOAL!#SEN take a 1-0 lead after a shot deflects off Eiji Kawashima & onto Sadio Mane! #WorldCup pic.twitter.com/kPXrCB5tQq

Japan fought back, and leveled the score in the 34th minute thanks to this beautiful strike from Takashi Inui.

Takashi Inui ties the game!#JPN is right back in this, now level with #SEN at 1-1 #WorldCup pic.twitter.com/pqVqiCEyOf

Senegal took the lead through Moussa Wague in the 71st minute, setting up what looked like a sure win for the African team.

The confident Japanese continued to fight back, and tied the match in the 78th minute through Keisuke Honda.

It was a goal so big to their World Cup dreams, that even a Japanese princess stood up to applaud the efforts of her countrymen.

Princess Hisako Takamado of #JPN was a big fan of the game-tying goal! pic.twitter.com/XecVwFMWTE

The top spots in Group H is a three-way dogfight between Colombia, Japan and Senegal, and should be fun to watch when the final matches are played later this week.

Both Spain and Portugal won their previous matches, and are back in action on Monday, playing Morocco and Iran respectively. The other two matches feature hosts Russia taking on Uruguay and Egypt will play Saudi Arabia.