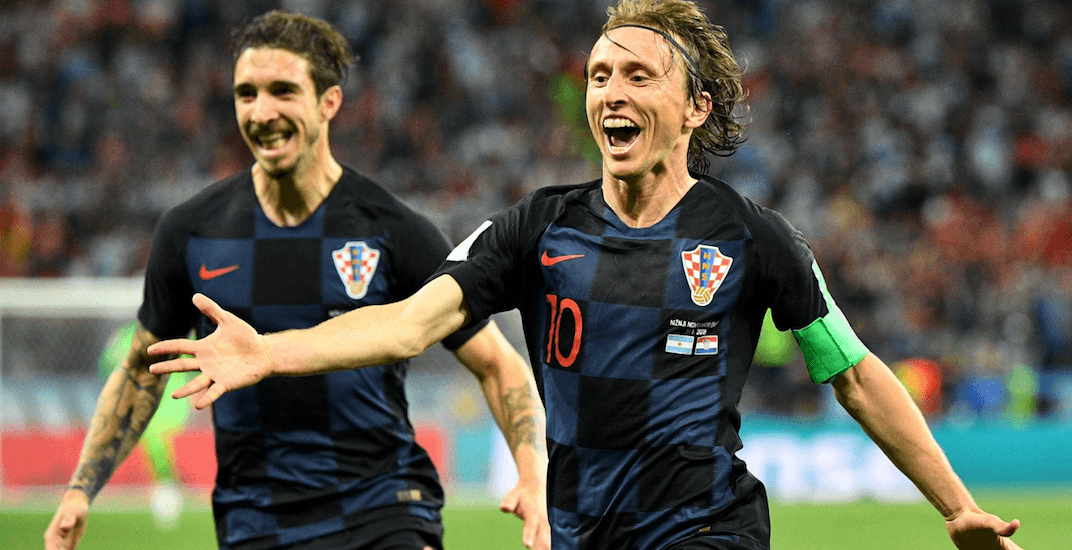 It’s been a tournament of upsets through the first week at the FIFA World Cup. World powers are falling like flies, it seems, and Thursday was no exception.

What a result for Croatia.

Up against Lionel Messi and perennial powerhouse Argentina, Croatia pulled off a massive upset, winning 3-0.

The win improves Croatia’s record to 2-0, and guarantees they’ll advance to the knockout round for the first time since 1998.

It all began with an error by Argentinian goalkeeper Wilfredo Caballero. An unforgivable giveaway gave Croatia a gift, with Ante Rebic converting to give his country a 1-0 lead in the 53rd minute.

An awful error from Caballero leads to a superb strike by Ante Rebic to put #CRO up 1-0. pic.twitter.com/qHigWTDV4s

Croatia’s second goal was no fluke though. Luka Modric powered home a world-class strike in the 80th minute to make the score 2-0.

Luka Modrić sinks #ARG and puts #CRO one step closer to the Round of 16.#WorldCup pic.twitter.com/aCdK29A6iI

Croatia added another in stoppage time, with Ivan Rakitic potting the 3-0 goal.

They're off to the Round of 16! #WorldCup pic.twitter.com/MZgtWMb75v

Argentina drew with Iceland in their first match and are now in danger of failing to make it out of the group stage. They’ll need a win against Nigeria, and some help, to move on.

To Messi's many talents, let's add 'Time Travel'. He knew. Before all of us, he knew.#WorldCup #ARG pic.twitter.com/ZjhnIkRVG4

Australia was the victim of the Video Assisted Referee in their first match, as France was awarded a penalty in the first-ever video review in World Cup history.

It worked in their favour in their second match against Denmark, as video revealed a handball in the box by Yussuf Poulsen.

The play that led to the penalty.

VAR determined that it was a hand ball on Poulsen, who will now miss Denmark's final group stage game of the #WorldCup pic.twitter.com/zZ6EMTEkDp

Mile Jedinak made Denmark pay from the spot, levelling the match 1-1.

Mile Jedinak remains perfect from the spot when representing his country. VAR led to the penalty and #AUS has tied the game.#WorldCup pic.twitter.com/HGkzZVKZbQ

Australia’s equalizer in the 38th minute came 31 minutes after Denmark opened the scoring with a gorgeous goal by Christian Eriksen.

A spectacular strike from Eriksen, his first goal of the World Cup, has #DEN up 1-0.#WorldCup pic.twitter.com/SsUY3h7Mm8

Australia will need a victory against Peru in their last match of the group stage, to go with some help from France, to advance.

France moves on, Peru’s run is over

Yet here they are, winless and goalless through two matches at the World Cup.

They won’t be advancing, despite some impressive play, after a 1-0 defeat to France.

The Peruvians went toe-to-toe with the European powerhouse, but fell victim to some bad luck. The only goal of the match took a favourable French bounce, with Kylian Mbappe getting credit in the 34th minute.

19-year-old Kylian Mbappé takes advantage of an unfortunate deflection for #PER and makes no mistake.#WorldCup pic.twitter.com/DAgLRjSEty

Peru came close to tying the match a few times, including this great chance in the 50th minute.

#PER was THIS CLOSE to evening the score #WorldCup pic.twitter.com/rnIQL3hzQz

This picture sums it up for Peru:

France, meanwhile, is off to the Round of 16. They’ll finish atop Group C with a draw or a win against Denmark in their next match.

Brazil is back in action on Friday, looking for their first win of the tournament against Costa Rica. Meanwhile, Serbia could guarantee a spot in the knockout round with a win against Switzerland.

And the smallest country to ever play in a World Cup, Iceland could put themselves in a great position to advance with a win against Nigeria.