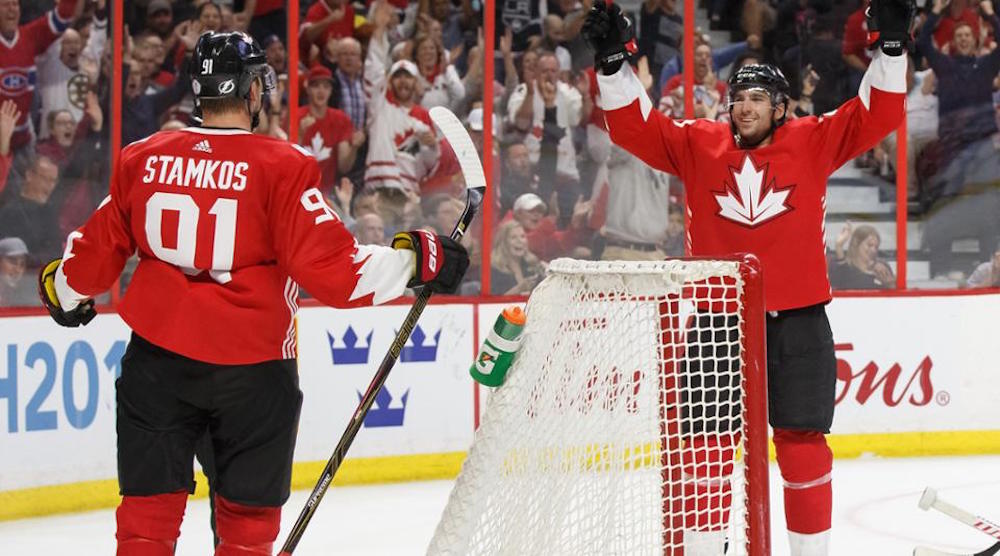 The World Cup of Hockey kicks off on Saturday, marking the first time we’ve seen this best-on-best tournament in 12 years.

Eight teams will compete for the title, and while Canada is the favourite, they are not shoe-ins to take home top spot. Say what you want about the gimmicky teams in this tournament, they both have a chance to win as well, making this will be the deepest tournament in best-on-best history.

The World Cup of Hockey is the descendent of the Canada Cup, which was created by the NHL and NHLPA after the success of the 1972 Summit Series. Due to non-NHL participation in the Olympics, it was the first true best-on-best international hockey tournament with NHL players.

Five Canada Cups were played between 1976 and 1991, with Canada winning four times and the Soviet Union winning once.

The tournament was rebranded the World Cup of Hockey for the 1996 tournament, with games being played in Canada, the United States, and Europe. The Americans won that year, while Canada took home the last World Cup in 2004.

Unlike the World Championship or the Olympics, this tournament does not have a lot of minnows.

Just eight teams split into two groups will compete at the World Cup. Canada is in Group A with USA, Czech Republic, and Europe. Group B contains Russia, Sweden, Finland, and North America.

Just two teams from each group will advance to the semi-finals, so each game in the round robin will be vitally important. The two winners in the semis will advance to a best-of-three final series.

As usual, Canada enters this tournament as the favourites. But don’t let that fool you, because there’s a very real possibility that they don’t make it out of their group.

Team Canada has been known to be slow starters at best-on-best tournaments like this, but this time if they start slow, they could be bounced from the tournament.

Canada has the best goaltender in the world in Carey Price, but it remains to be seen how much rust he’ll have coming off a serious season-ending injury. If he has a bad game, will Babcock stick with him?

Canada chose to go for low risk, reliable defencemen like Jay Bouwmeester rather than the high skill of PK Subban. That’s a luxury no other country in the world has, although the merits of such a luxury are debatable. Remember when Rob Zamuner, a forward, made the 1998 Olympic team for similar reasons?

With Henrik Lundqvist in goal and the likes of Erik Karlsson, Victor Hedman, and Oliver Ekman-Larsson on defence, it might prove very difficult to score on Team Sweden in this tournament.

Arguably the best defensive group in the tournament, Sweden chose not select John Klingberg, Alex Edler, or Adam Larsson. That’s how deep they are.

Up front, the Swedes are not as strong as they have been in the past, with the likes of Mats Sundin and Daniel Alfredsson now retired, and Henrik Zetterberg injured. This is the Sedins’ team now, and they’ll be counted on for offence alongside with their new Canucks teammate Loui Eriksson.

Their X-factor might be their power play, which boasts the Sedins, Eriksson, Karlsson, and Ekman-Larsson on one unit. “He’s probably the best power play defenceman in the NHL,” Daniel Sedin said about Karlsson, who will be fed for one-timers from him and his brother. “He’s got such a good shot, he’s such a threat from up there, but he can also pass.”

There are ten returnees from the 2010 team that nearly won gold at the Olympics in Vancouver. That was the last time that best-on-best was played on North American ice. The Americans always seem to do well in tournaments in North America, having placed first or second in four of the past five best-on-best tournaments played close to home.

USA is fast, physical, and experienced. Especially with Tortorella as their head coach, expect a gritty North American style of game to shine through, as we saw during their pre-tournament games.

Russia enters every tournament as one of the contenders, and this time is no different. They’re strong in goal with Sergei Bobrovsky, and loaded up front with the likes of Alex Ovechkin, Evgeni Malkin, and Vladimir Tarasenko.

Same old story for Russia though, will they come together as a group and play strong as a team?

The weakness for Russia should be on defence, where just three of their players averaged over 20 minutes of ice time per game last year in the NHL. Andrei Markov, who turns 38 this year, is their leader on the back end and that’s telling.

Everybody’s favourite darkhorse, the under-23 team from North America, is becoming less of a darkhorse by the day.

They’re in an extremely difficult group, so that may hurt their chances to make the semis, but don’t count them out. They’re young, talented, and don’t have an ounce of pressure on them to perform.

As we saw during the pre-tournament competition when they made Team Europe look old and slow, their team speed will be something other teams will have to contend with. The true test for them will be playing against physical, top-tier defensive teams.

If there’s one thing I’ve learned from watching international ice hockey tournaments in the last 20 years, it’s to never count out the Finns. Team Finland is always better than the sum of its parts would suggest, and that should hold true once again in this tournament.

Runners-up at the last World Cup in 2004, they are very strong in goal with Tuukka Rask and Pekka Rinne to choose from.

They’re young on defence, with four of their seven d-men 22 years-old or younger. That makes 25-year-old Sami Vatanen a greybeard for this group. In fact, Sami Lepisto is the only defenceman on this team that’s over the age of 25.

Up front, Finland has a group of good, tenacious forwards who play a complete game.

More than any other team, it will be interesting to see how Team Europe comes together.

A mixture of players from different countries from Europe other than Sweden, Finland, Russia, and the Czech Republic, there’s some serious talent on this roster.

“Experience,” Kopitar, Team Europe’s captain says is his team’s biggest strength. “We have a lot of games played in the NHL at the top level, in the Olympics, some guys even played in the last World Cup (in 2004).”

The major question mark for Europe, other than how they play as a group, will be on defence where they look to be old and slow. That was exposed greatly by Team North America in the pre-tournament games. Zdeno Chara is 39 years-old now, while Mark Streit turns 39 later this year. At age 26, Roman Josi will be a very important player for this team.

The Czech Republic comes into this tournament as big underdogs. They don’t have as much depth as the top teams in this tournament, so losing a player like David Krejci before the first game really hurts.

On paper, this team simply does not match up well against the top teams at any position. None of their defencemen averaged over 20 minutes of ice time last season, while their top goal scorer in the NHL last year was Ondrej Palat, with 16.

Petr Mrazek (.921 SV% last season) gives them a solid option in goal, should he be chosen over Ondrej Pavelec and Michal Neuvirth.