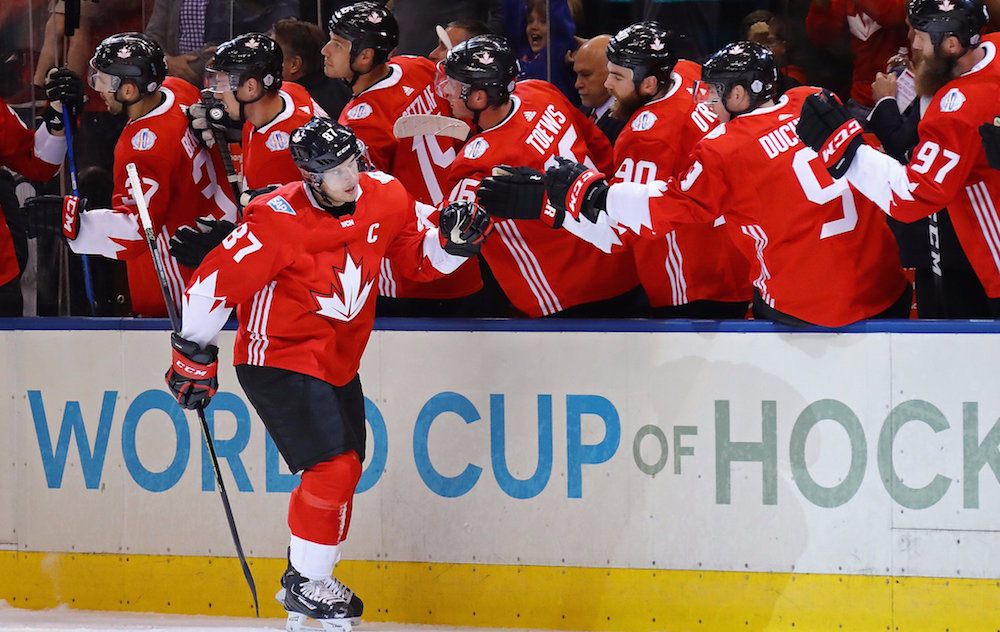 And you wanted to see North America play.

Canada and Russia provided edge-of-your-seat excitement on Saturday, with some nervous moments for both teams. Canada was ultimately the better team on the ice, and in the end that was reflected on the scoreboard with a 5-3 victory.

Let’s dive into it with a post-game SixPack:

The story of this game for two periods was Russia’s goaltender, Sergei Bobrovsky.

Then, out of nowhere, Russia got a lucky bounce off the boards, combined with an ill-timed pinch from defenceman Jay Bouwmeester, which allowed Nikita Kucherov to fly down the wing on a 2-on-1 and score on a perfect shot.

That goal came 8:47 into the second period, and gave Russia life. Canada continued to outshoot Russia, and Ryan Getzlaf hit a goal post, but cracks in the armour began to show. Russia got some glorious scoring chances, and eventually converted on a goal by Evgeny Kuznetsov on just Russia’s 12th shot of the game.

Brad Marchand’s first goal just over a minute later calmed things down for Canada, and put them into the second intermission tied 2-2.

Unless you’re a Bruins fan, you likely hate Brad Marchand with a passion. He plays like a rat, he looks like a rat, but damn if he isn’t a good hockey player.

Despite the fact that he was second in goals among all Canadian NHL players last season (behind only Jamie Benn), he was a surprise selection to Team Canada for many. After he was selected, you may have expected to see him in checking role for this team.

Instead, he’s fit perfectly on the top line with Sidney Crosby and Patrice Bergeron.

“I think all three of us work hard to gain possession to create turnovers,” Crosby said about his line. “[Marchand] does that really well. He’s got a great shot. He’s got speed, a lot of different things. But I think just the way he competes every shift you know that he’s able to generate a lot sometimes from nothing. Marchand scored two goals tonight, both of them huge.”

Marchand scored his first to tie the game at two late in the second period, converting a terrific pass from Crosby. His second came 1:16 into the third period, a very good wrist shot that beat Bobrovsky.

A friend of mine – a Canucks fan – texted me after Marchand’s second goal.

“I feel so dirty cheering for those two goals…”

It takes two pretty big goals to get a Canucks fan to cheer for Brad Marchand.

Even though it would have been another goal for Canada, I was truly delighted Brad Marchand did not get the hat trick. DELIGHTED.

One step at a time, I guess.

3. The best we’ve ever seen in red and white from Crosby

This is the best I’ve ever seen Crosby play in a Team Canada uniform. We all remember his breakaway goal in the gold medal game in Sochi, and of course his golden goal in Vancouver, but those were not exceptional tournaments for number 87.

Sure, Crosby was playing well, but he didn’t produce on the scoresheet like you’d expect from the best player in the world.

This tournament is a different story. Crosby now leads the World Cup in scoring with 7 points (3-4-7) in four games.

He was superb tonight as well.

The first goal of the game came after some tenacious forechecking by Crosby, taking advantage by some sloppy play by Dmitri Kulikov and deking Bobrovsky out of his jock strap.

The Crosby goal was a beaut #WCH2016 pic.twitter.com/jfZjOEQmaY

Marchand’s first goal was a product of Crosby again.

When you look at the final score (5-3) and the final shot total (47-34), you might be tricked into thinking tonight’s game was easy. There were nervous moments and Crosby’s play – particularly on the second Canadian goal – helped calm things down.

“That goal in the second period was huge for us,” said Shea Weber. “They seemed to get a little momentum for themselves… They scored a couple times and kind of took over. We got that one back and I think that switched it back over again.”

Canada’s four-line attack is something to behold. Teams can hang with them for only so long before they wear you down. They really have four first lines. That means that if you take one shift off, if you make one blunder, Team Canada will make you pay.

It took a little longer against Russia, but eventually the barrage of shots took its toll.

After Marchand’s goal to make it 3-2, Canada got two more before the first half of the third period.

Perry pulls it out between his legs and then roofs it. #WCH2016 pic.twitter.com/oWT5m7q1B1

Then, aided by Ryan Getzlaf driving to the net, John Tavares showed great patience before sniping the fifth goal past Bobrovsky.

What patience by Tavares #WCH2016 pic.twitter.com/SLPS6SU2Hg

Not long after that, Canadian fans were singing “nana-nana hey hey hey goodbye” to a second team in this tournament.

Yet again, Alex Ovechkin comes away from a game against Canada having not accomplished a whole lot.

That says more about Team Canada than Ovechkin, of course, and you really have to tip your cap to yet another silencing of the Great 8.

Ovechkin had 20:29 of ice time tonight, putting up no points and only firing one puck on Carey Price. That low shot total is extra remarkable when you consider that he had 4:55 of power play time.

Babcock, as only he can, explained how Jonathan Toews, Shea Weber, and Marc-Edouard Vlasic got the job done defensively against Ovechkin:

“Well, Johnny won all the faceoffs and the guys are good defensively. Ovie’s a big big man and can wear you down. Web doesn’t get worn down, he’s too big.”

If this were a game at the World Juniors with 18 and 19-year-old kids, Russia might have carried the momentum for a while longer after the go-ahead goal late in the second period.

But this is a veteran-laden group, filled with winners.

To a man, the players said they remained calm despite losing their grip on the game, according to the scoreboard.

Canada will begin a best-of-three final series on Tuesday against the winner of tomorrow’s Sweden-Europe game.