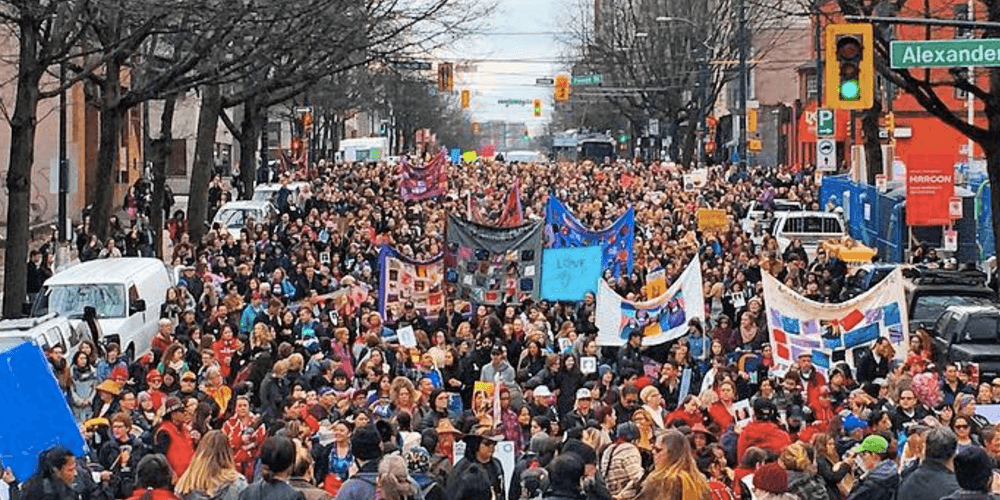 Hundreds gathered on the streets of Vancouver’s Downtown Eastside on Tuesday to honour the lives of missing and murdered indigenous women in the 27th annual Women’s Memorial March.

The march started in 1991 in response to the murder of a Coast Salish woman on Vancouver’s Powell Street.

Since then, the march has grown into an annual event which takes place every Valentine’s Day.

The event began at the intersection of Main and Hastings streets and proceeded to stops where women were last seen or found.

In 2016, the Government of Canada announced an independent national inquiry into missing and murdered indigenous women, which is expected to take two years to complete. However, march organizers say work remains to be done to protect the lives of indigenous women.

“Increasing deaths of many vulnerable women from the Downtown Eastside still leaves family, friends, loved ones, and community members with an overwhelming sense of grief and loss,” said the Women’s Memorial March Committee in a release.

“Indigenous women disproportionately continue to go missing or be murdered with minimal action to address these tragedies or the systemic nature of gendered violence, poverty, racism, or colonialism.”

Remembering our missing and murdered Indigenous sisters; recognizing the injustice faced by women in the #DTES. #WomensMemorialMarch #MMIW pic.twitter.com/KJV8Wsnqou

What a beautiful coincidence to be on the road today in Vancouver and witness the energy, sadness, passion and movement by our Coast Salish Territories. The February 14th Annual Women’s Memorial March is held on Valentine’s Day to honour the memory of all women from the Downtown Eastside who have died due to physical, mental, emotional and spiritual violence. #womensmemorialmarch #stayaware #respect #letusnotforget

Honouring the lives of our Indigenous women, two-spirit folks, and all of our sisters. #MMIW #MMIWG2S #dtes #womensmemorialmarch #saytheirnames

Feb. 14 Annual Women’s Memorial March in Vancouver at Main and Hastings. Honouring stolen sisters. Demanding justice for murdered or missing women and girls of the DTES. Demanding justice for murdered or missing Indigenous women and girls. Gathering to witness the work and resilience of incredible people who are demanding respect, dignity and justice. #wmm #mmiw #niunamás #protectlifegivers #justicenow #uncededcoastsalishterritories

We march. And we will keep marching until Love conquers all. #weareone #dteswomensmemorial @oneyogalions

I spent this Valentines afternoon marching with my love (@duggu22) to honour & remember all of the murdered & missing women of the DTES (downtown east side). 💖 I really liked this persons big heart in the sky. ❣️❣️ . #dtes #womensmemorialmarch #endviolence #coastsalish #vancouver #vancity