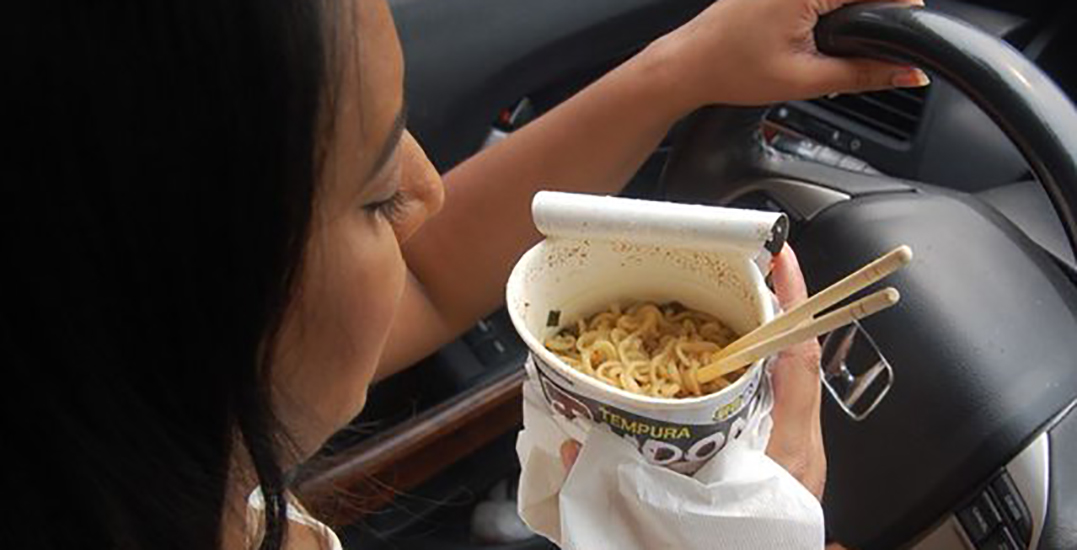 Distracted driving comes in many forms. This, however, might be the most unusual one yet.

A woman in Kelowna, BC, has been convicted for driving without due care after she was caught behind the wheel with a bowl and chopsticks.

The incident took in November of 2018. According to a court ruling, the woman was driving along Highway 33, where two police officers were involved in a “call operation.”

Constable Neid, who was in an elevated location at the time of the incident, told the judge that he observed the female driver with “a bowl in her left hand in a position 3/4 to the face from the steering wheel” and “chopsticks in the driver’s right hand.”

Cst. Neid states “that there were no hands on the steering wheel” and describes the woman’s action as using the chopsticks to shovel the food. She was also believed to be speeding, driving at 60 km/h in a 50 km/h zone.

When Constable Yakonowsky issued a ticket, she argued that she was “perhaps no more than 10 km/h over” the speed limit and that she managed to keep one hand on the steering wheel while driving.

When the matter was taken to court, the woman presented the same argument to the judge and explained that “she had one hand on the wheel with three fingers of her left hand holding the wheel and her index finger and thumb holding a bowl of spinach.”

Judicial Justice Burgess rejected both of the defendant’s arguments, stating that going even “1 km/h over the speed limit is speeding.” Burgess also favoured the evidence of Cst. Neid, due to his “elevated location with a view of the vehicle.”

“He was clear and precise in his evidence regarding his observations,” Burgess writes in the court ruling. “Cst. Neid was candid in his cross-examination in saying that he would not have had [the woman] stopped by the pickup crew if he had seen one of her hands on the steering wheel.”

Burgess also clarifies that she does not find “that a person who is eating while driving is driving without due care and attention.”

The case ended with the female driver being found guilty of driving without due care. She will have until October 31, 2019, to make the payment.

An older tweet by BC RCMP Traffic explains that driving without due care can result in a $368 fine, as well as six points towards the person’s license.

#DYK you can’t eat a bowl of soup while driving? Drive without due care= $368 Fine + 6 points #TicketTuesday pic.twitter.com/TlOXWtvgOW