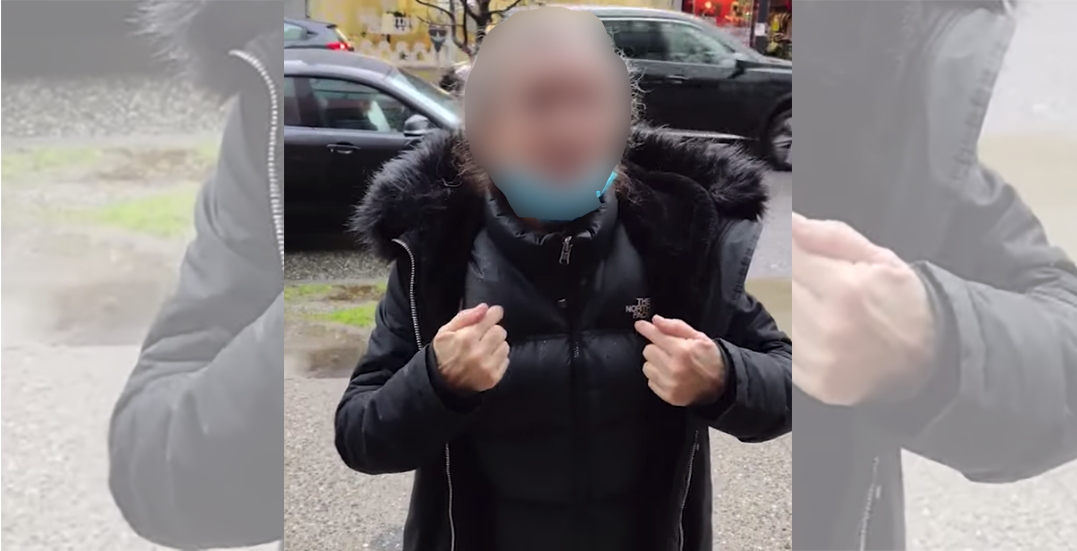 A woman confronting a group of people at a "Meet a Muslim" outreach booth in Downtown Vancouver. (Bridging Gaps Foundation/Facebook)

An outreach group is speaking out after an encounter with a woman in Downtown Vancouver who used derogatory language and anti-Muslim sentiments.

Bridging Gaps Foundation is a registered non-profit that “aim(s) to bridge the gaps between Muslim and non-Muslim communities” by using education, integration, and outreach programs.

Over the past weekend, however, the organization filmed an exchange during which a woman used derogatory language and anti-Muslim sentiments towards members at an information stand.

“On a weekly basis, some of our team members set up a ‘Meet a Muslim’ booth to bridge the gap between Muslims and non-Muslims, and share information on Islam,” the Foundation explains in a Facebook video.

“On Sunday, December 27, in downtown Vancouver, a lady walked up to our team and started abusing, swearing, and harassing the team as well as some bypassers.”

The video includes a six-minute exchange between the woman and three members at the outreach station. She curses at the members and stands alongside them despite being asked to leave.

“Would you like a ride to the airport?” she says, adding that the confrontation “is fun.”

“We’re gonna be talking all afternoon as long as you’re here… I could be here all day.”

The video involving the woman stops filming after several bystanders begin to speak to her.

The Bridging Gaps Foundation says it’s sharing the video to highlight the importance of education, the severity of Islamophobia and anti-Muslim bigotry, and the general lack of understanding of Islam.

They also thank their members “for displaying patience in the face of bigotry,” as well as “a kind couple that stopped by and offered assistance.”

The Vancouver Police Department (VPD) was also contacted, although the woman had left the area by the time they arrived.

The VPD told Daily Hive it received a report on Sunday about a person directing derogatory and insulting language towards three people who had erected an information stand on Robson Street to raise awareness about Islamophobia.

“VPD officers did respond and spoke to the person who called police, however, the subject of the complaint had left the area and could not be located,” says Sergeant Steve Addison in an email.