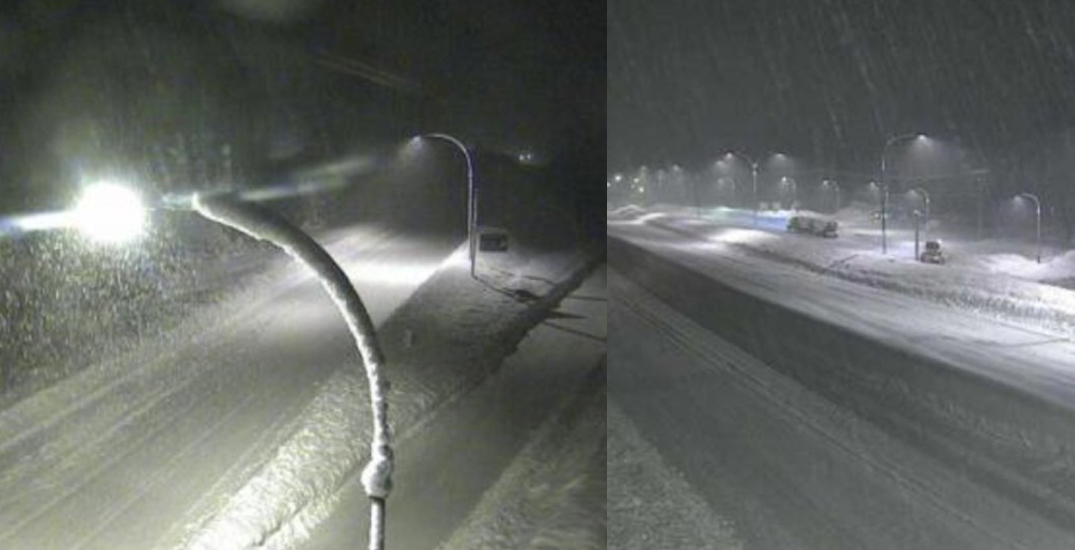 Several travel advisories are in effect for highways connecting the Lower Mainland to BC’s Interior as a winter storm continues to dump snow on the mountainous routes.

A message posted to DriveBC’s website said heavy snow is expected to continue throughout the day Saturday, and drivers should make alternate plans if they were considering using highways 1, 3, 5, 5A, or 97C.

OPEN – #BCHwy5 is open Southbound between #MerrittBC and #HopeBC. Road conditions are Compact snow, slushy and slippery sections. Please drive with care. See the road conditions for yourself on our BC Highway cameras here: https://t.co/JIEtM34nQW pic.twitter.com/U14mXTws3w

At one point Friday, all three major routes from Metro Vancouver to the Interior were impacted by closures either due to snow or a rockslide.

Highway 3 remained closed Saturday morning because of a vehicle incident between Allison Pass Summit and Manning Park, and closed again between Sunshine Valley and Saturday Creek for compact snow.

Although the Coquihalla Highway reopened, DriveBC has issued a travel advisory between Hope and Merritt. The agency says an additional 60 centimetres of snow is expected Saturday, and that travel is not recommended unless “absolutely necessary.”

Drivers who decide to use the Coquihalla despite the warning will likely encounter delays and possible closures as crews clear snow, according to DriveBC.

Drivers should also expect delays and closures because of avalanche control on Highway 1 between Eagle Pass and Rogers Pass, where there is another travel advisory in effect.

Further east, between Revelstoke and Golden, Highway 1 is closed for avalanche work.