Hot on the heels of announcing the Canadian dates for their On The Road Again 2015 stadium tour, which includes playing Vancouver’s BC Place on July 17, we’ve got a pair of One Direction tickets to give away to one lucky reader.

The North American tour, promoted by Live Nation, kicks off on July 9, 2015 at the Qualcomm stadium in San Diego, California. Canadian dates on the North American leg of the tour include stops in Vancouver, Edmonton, Winnipeg, Toronto, Montreal and Ottawa.

All Canadian dates, with the exception of Ottawa, will go on sale November 1.

Fans will have access to a pre-sale by visiting the band’s Facebook page on Wednesday, Oct. 29. American Express is the official credit card of the Canadian leg of the ON THE ROAD AGAIN 2015 North American tour.

To enter to win a pair of tickets to see One Direction’s concert at BC Place in Vancouver on July 17, 2015, do at least one of the following: 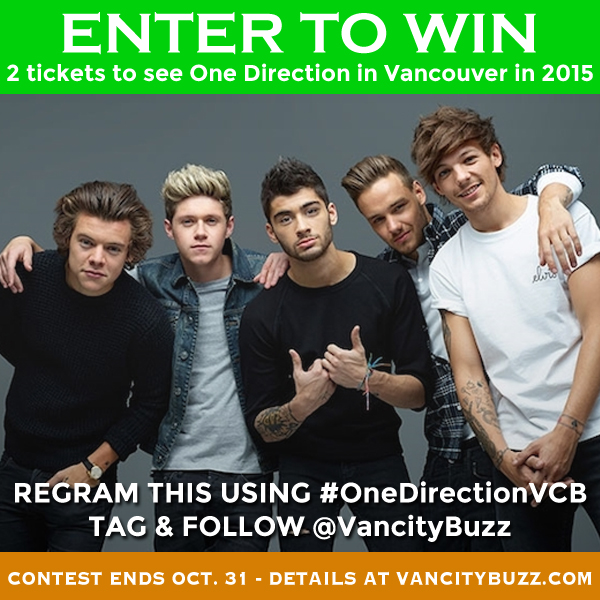 3. Leave a comment below telling us your favourite One Direction song. (1 entry)

4. Sign up for our weekly Buzz e-newsletter and tell us via comment on this article that you would like to be entered into this contest. (1 entry)