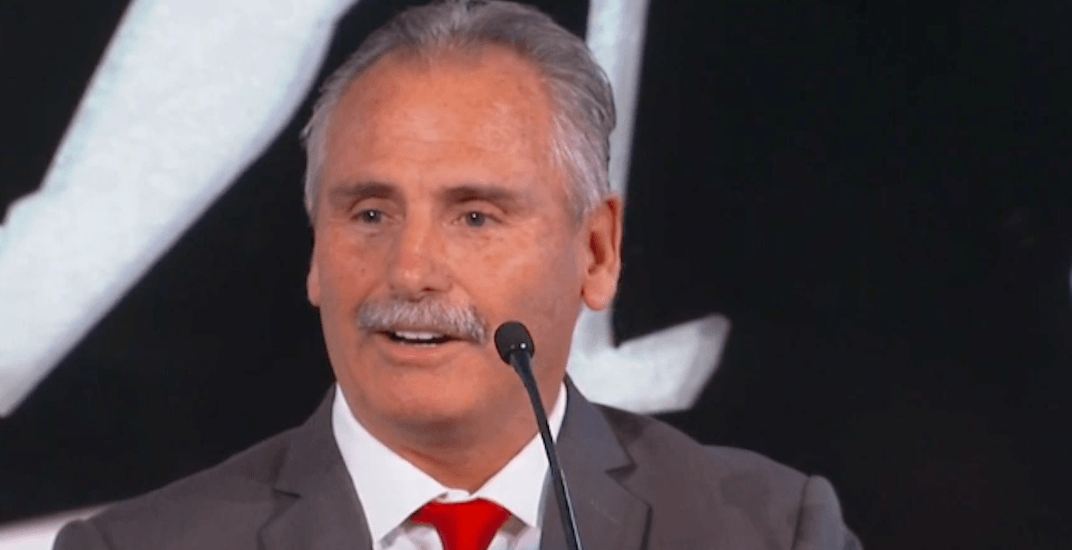 Canada is going to be doing it Willie’s way.

Willie Desjardins was officially introduced as Team Canada’s head coach for the 2018 men’s Olympic hockey tournament at a press conference in Calgary on Tuesday.

Fired by the Vancouver Canucks in April, Desjardins will head up the first men’s Olympic team without NHL participation since 1994 in PyeongChang this February.

Desjardins has had success at every level, winning two WHL championships with the Medicine Hat Tigers, and a championship in the AHL with the Texas Stars. Though his teams didn’t excel during the last two seasons in Vancouver, the Canucks overachieved in his rookie season, making the playoffs with 101 points.

Internationally, Desjardins has won a gold medal as an assistant coach for Canada at the World Junior Championships in 2009, and took home silver the following year as the team’s head coach.

“What an opportunity, it’s an amazing dream,” the 60-year-old head coach said.

“It’s an opportunity of a lifetime. We look forward to it, and we’ll go hard at it every day.”

Also announced were the team’s management group, headed up by GM Sean Burke. Burke will be assisted by Martin Brodeur.

Very honored to be named GM for Canada's National Team @HockeyCanada @Olympics and work with this talented group of people.

“We know the challenge, Burke said. “We know that we’re going to have to maximize every day we have between now and February. Every practice, every game we play, the selection of our players, building our team, building our culture, there’s a lot of things ahead of us. But we relish that.”

Burke, a former NHL goaltender with the Devils, Whalers, Hurricanes, Canucks, Flyers, Panthers, Coyotes, Lightning, and Kings, participated in two Olympics for Canada (1988 and 1992). He’s now a pro scout for the Montreal Canadiens, and has international management experience that includes being an assistant general manager for Canada at the 2017 World Championships and general manager at the 2016 Spengler Cup.

A hall of fame goaltender, Brodeur is now the assistant general manager of the St Louis Blues. He participated in four Olympics for Canada, winning two gold medals.

The challenge for Burke is company is significant.

Without the likes of Sidney Crosby and Connor McDavid to choose from, Canada won’t be able to build a super team and aren’t likely to be the favourites to take home gold. Russia, who will have a number of good KHL players to choose from, likely have the advantage in what promises to be an extremely competitive tournament.

For the first time since before the 1994 Winter Games, Canada men’s team will prepare for the Olympics with tune-up games in advance of the tournament. The first begins in Sochi, Russia with a KHL tournament in early August. The final tune-up tournament will take place at the Spengler Cup in Davos, Switzerland in late December.

“These first two events allow us to continue a player evaluation process that began last season with our Deutschland Cup and Spengler Cup teams,” said vice president of hockey operations Scott Salmond. “We will continue to look at the best available players to us – these two tournaments being the next opportunity to see some of the talent we can select from.”

The pre-Olympic games will give Desjardins and his coaching staff a chance to work together, plus give Burke and his management team a chance to evaluate players. Without NHL players to choose from, Canada will scour European leagues and minor pro leagues in North America to find available Canadian talent.

“This is an exciting time for Hockey Canada and for our national men’s team program, and it will be an exciting season for Canadian hockey fans,” said Hockey Canada CEO Tom Renney in regards to this year’s schedule. “The goal is always to field the best possible team in all upcoming competitions, including this February when we hit the world’s biggest sporting stage in Pyeonchang.

“The faces on our Team Canada rosters may be different than in previous years, but the expectations will be the same.”